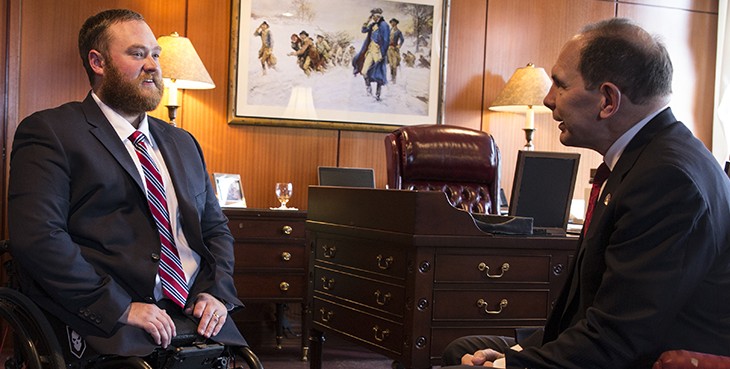 Staff Sgt. Jason Gibson was just three months into his third deployment, when he stepped on an improvised explosive device while on patrol in Afghanistan. Despite the severity of his wounds, he watched as medics frantically tried to stop the bleeding and get him evacuated out of the combat zone.

“I remember everything about that day up until I was loaded up on the helicopter,” he said. “I blacked out after that, and when I woke up I was at Walter Reed.”

He recalls being told the president was coming to meet him. When it happened, Gibson, who lost both legs after multiple surgeries, wasn’t sure who the man shaking his hand was – a side effect of the arduous road to recovery and traumatic injuries he sustained.

“I was in and out – the stuff they had me on stayed in my system for a long time – and even a couple of weeks after first getting to Walter Reed, I wasn’t all there, and that’s when the president came to see me,” Gibson said with a chuckle recalling the 2012 meeting.

But as the fog of treatment settled, he emerged with a clear understanding of who his visitor was. Last fall, after almost two years of recovery, the Westerville, Ohio, native wanted to thank the president for his visit.

“I thought there was so much bad press, and even hate, at that time,” he said. “I wanted to thank him for coming and seeing me, but I also wanted to let him know how far I’d come. He saw me at my worst, those days I couldn’t even move in my bed without help, but I wanted him to remember me by how much I had accomplished.”

In his letter, Gibson explained to the president that, “there is life after a traumatic event and good can come of all things.”

The president did remember. He recalled that meeting, as well as Gibson’s letter, in his weekly address last Saturday.

“While serving in Afghanistan, Jason Gibson was gravely wounded—he lost both his legs,” Obama shared. “When I first met him in the hospital, he was just beginning his long, difficult road to recovery. But last year, Sgt. Gibson wrote to tell me that with the help of our extraordinary doctors and nurses, he’s making extraordinary progress. He just moved into a new home, and he and his wife just had a baby girl.”

Gibson’s words struck a chord at the White House. Last night, Gibson and his young family joined the first lady as the president gave his State of the Union address.

Just hours before the event, Gibson reflected on the invitation and the opportunity to be a part of history, he also looked at what got him to this point in his life and rehabilitation.
“Everyone has that one day when you wonder ‘why did this happen to me,’ and you’re angry at everything,” he said. “But after that, you realize how many people are there to support you. For me it was my family and church family.”

Gibson, who gets his medical care at the Dayton VA Medical Center, said staying active helped him get through the toughest days of his recovery. At first he had to relearn how to sit up, and then to use a wheelchair, but in less than two years he was trying as many adaptive sports as he could with the help of his occupational therapists. He’s now participated in four marathons by using a handcycle.

He wants his fellow Veterans to know they should also get moving.

“I want to show that if you want to do something, there is a way to do it,” he said. “It may not be the quickest way, but a disability doesn’t have to stop you from doing what you want to do.”

The most impressive State of the Union guest – CBS