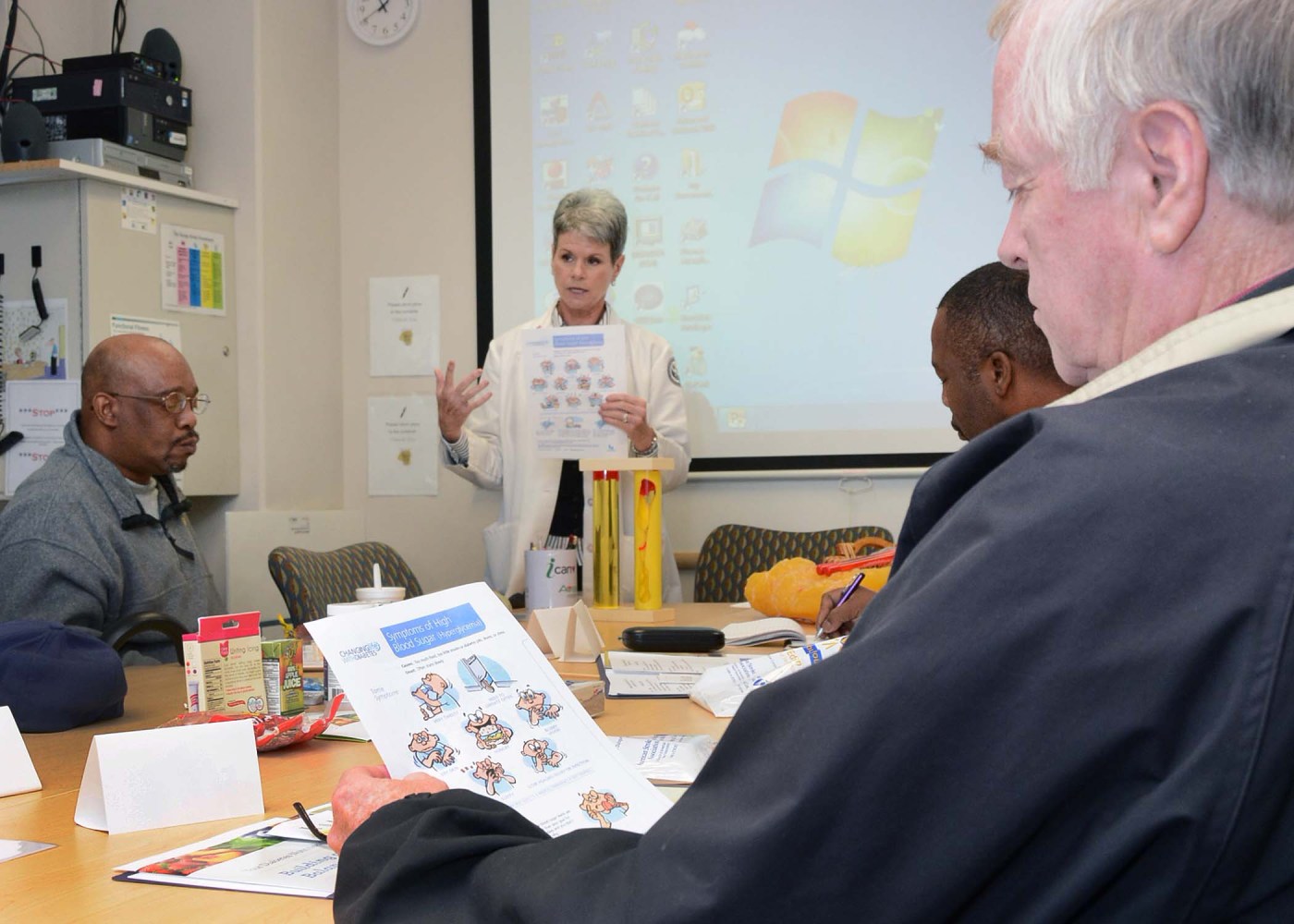 Imagine going to see your health care provider about your diabetes or high blood pressure, and having 10 other people in the room.

That’s exactly what happens during shared medical appointments. Far from an invasion of privacy, the approach is catching on in VA and elsewhere as a cost-effective way to help patients manage chronic diseases. It’s important to note that the groups are a supplement to standard care—not a replacement. Patients still receive all the one-to-one attention they may need.

Typically, a multidisciplinary team meets with anywhere from 8 to 20 patients for up to two hours. The team might include, for example, a couple of pharmacists, a nurse, and a dietician. That combination of professionals can vary. Often, a nurse practitioner or physician assistant will be involved.

During the sessions, the thrust is education and discussion about self-care, wellness, and positive lifestyle changes.

Researchers who have studied the model say patients get support from their peers and learn new strategies from them, and that they like the team care. The providers who work with the groups feel a sense of teamwork and camaraderie. Overall, studies show the approach is satisfying for most patients and providers and leads to improvements in patient outcomes.

One such study appeared recently. Dr. David Edelman and colleagues at the Durham VA Medical Center and Duke University reviewed 17 past studies that compared shared medical appointments with usual care for patients with diabetes—in or outside VA. Importantly, the review looked only at studies in which the group appointments had included medication management, along with the group education. Dr. Edelman says the pairing of the two is known to be an effective combination.

By and large, the shared appointments worked to improve patients’ metrics. On average, patients saw significant drops in blood sugar levels and blood pressure, although there were no improvements in LDL (“bad”) cholesterol. The researchers said the studies they looked at didn’t yield enough data for them to draw conclusions about impacts in other areas, such as patients’ level of satisfaction, or their use of other health care resources.

Another VA study helps fill in some of those gaps. A group at the Portland VA held a focus group with 18 Veterans, mostly men, who had taken part in shared medical appointments for diabetes. Three of their wives also attended the focus group. The results are expected to appear in May 2015 in Federal Practitioner, a journal for federal health professionals.

In the study, asked about their experience with this care model, the Veterans responded quite positively. Typical comments:

“Classes make you feel more normal, when you sit with these people whose experiences you share.”

“When people have had a problem, get together and say how they’ve overcome it, I wanna hear about it.”

Those who had no family members for support seemed especially enthusiastic. One said, “Being members of the military, you still have civilians and they are them and we are us. … With no family members this [shared medical appointment] has made a big difference.”

VA researchers continue to study the model. One study that is just wrapping up, for example, looked at the use of videoconferencing to extend the shared medical appointment model to those Veterans with diabetes who live in rural areas. The findings should be published in the next few months. Stay tuned!

Mitch Mirkin, based in Baltimore, is a supervisory writer-editor with VA Research Communications. He has been with VA since 2000. Earlier in his career, he was managing editor of a community newspaper and publications manager for a large nonprofit healthcare facility, both in the Philadelphia area.