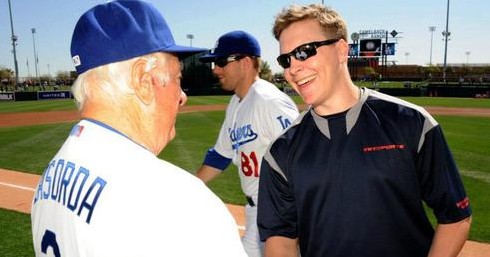 Daniel “Doc” Jacobs served in the U.S. Navy as a Corpsman attached to the Marines. In 2006, he was injured by an improvised explosive device losing his left leg; the toes on his right foot; and two fingertips on his left hand. He actively promotes the use of athletics as a means for support and activity to other injured Veterans through his work as the director of VETSports, a non-profit organizations he co-founded.

The groan of frustration was audible from Daniel Jacobs amidst the pop of the mitt and the sound from other fields. Even with a couple hundred ballplayers trying out on the back fields at Tigertown, his frustration was evident. His positive energy stood out all morning, and he had trained for weeks, but he had been practicing off a live pitcher — former Major League pitcher Justin Speier — not the pitching machine he saw now.

“Give him a couple more swings,” said one of the coaches.

Jacobs regrouped in the box and readied himself to swing a little sooner. This time, he connected, centering a ball through the middle.

It was a rare moment of patience in a baseball tryout camp. With so many players to evaluate in a morning, snap decisions are required, and stories of players pursuing their dreams are reduced to snapshots — a swing, maybe a throw, and then players are sent home.

Jacobs, though, had already made an impression. And as he put his gear back in his bag, Tigers officials took a moment to thank him for coming out, and for serving his country.

“My best friend’s a huge fan of the Tigers, so I figured I’d write them and give them a shot,” Jacobs said. “So far, they’ve been pretty open with the whole thing. They’re a very welcoming organization, and that’s really awesome. I appreciate it.”

In a camp full of long shots, his was among the longest, trying out at age 29. But for an Iraq war veteran and amputee to get this far, long shots don’t mean much to him.

“Nine years ago, I was laying in a hospital bed in Bethesda, [Md.],” Jacobs said. “I’m just blessed to be here. Any day you can get out and play baseball is a good day, right?”

“Whatever they tell me I can’t do, that just fuels my fire,” Jacobs said. “Once you get something in your mind, you’re pretty determined and you just go for it.”

Athletics helped lead Jacobs back. Now discharged, he’s trying to show other veterans that path by example. He hand-cycled the Miami Marathon in 2007, then ran the Detroit Half-Marathon on his prosthetic. He plays baseball in a college summer league. Now, he’s trying out with the pros.

Jacobs grew up wishing he could hit like Jim Thome. Unlike many, he’s taking his swings.

“I would love to make it, even if it’s just playing a Rookie league game or whatever, just to help out whatever I could,” Jacobs said. “If not, then hey, I’m out here playing baseball in Florida, right?”

Jacobs tried out previously for the Dodgers and White Sox in Arizona. For this, he flew across country from his home in San Diego, where the Union-Tribune chronicled his journey here.

He tried out Monday morning, wearing high socks, one ankle simply a little thinner than the other, but moving around like any other ballplayer, on his own, as player No. 301. He fired throws across the infield, then took a round of batting practice.

Jacobs was surrounded by former college players, Minor Leaguers and guys trying to hang on. And he was the one yelling support to them.

“I just know when I get out there, I get a little jittery and shaky,” Jacobs said. “I know some of these guys. Once you start talking with them to get your throws up, good throws, then they start getting into it and relaxing. Because it is kind of intimidating.

“They’re standing there with their clipboards, watching you. My first two cuts at the plate weren’t that great. Then I got in there and made a good connection.”

Jacobs didn’t walk out with a contract, but he got an invite. If he can make it back to Florida, Tigers director of player development Dave Owen would like to have him visit with their Minor Leaguers and take in a game.

Jacobs got noticed, and so did his cause.

“I’m heavily involved in the nonprofit work just trying to get out there and get [veterans] out in more productive, healthier aspects to living their life,” Jacobs said. “Because sitting on the couch and feeling sorry for yourself, the survivor’s guilt and the stages of grieving, it’s terrible. Once you get inside your head, it’s a hard place to get out of. I just feel that if I can get out here and play baseball and get my story out there, then it can reach out to somebody else.

“Last night, an 84-year-old amputee emailed me and asked me about prosthetics. He wants to get out and play tennis again — an 84-year-old who just had his leg amputated. That’s what it’s all about to me, getting out and getting my story out there and just trying to provide any assistance I can.”