Remembering the Battle of Okinawa 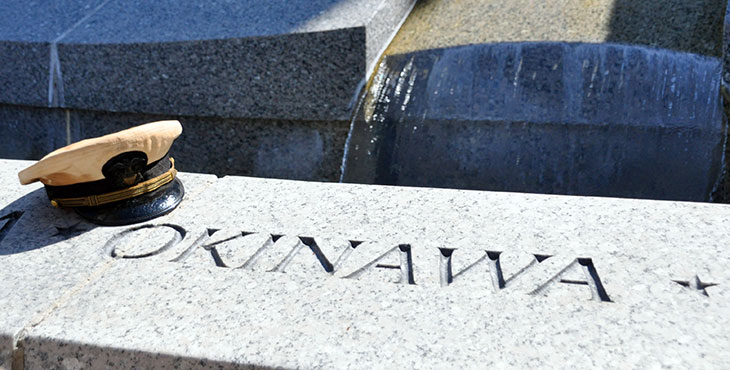 Despite the sunshine and blue skies, there was still a bit of chill in the air as a small crowd gathered at the World War II Memorial in Washington, D.C., on Wednesday to remember the 70th anniversary of the Battle of Okinawa.  Hosted by the Friends of the National World War II Memorial, the commemoration recalled the 82-day campaign that started on April 1, 1945.

Veteran Josiah Bunting III, chairman of the Friends board of directors, recalled how the campaign was the Pacific Theater’s largest amphibious assault and the final land battle of World War II. “Okinawa, in important ways, was both the most significant and costliest of the American island battles and victories in the Pacific,” Bunting said.

Among the Veterans on hand for the 70th anniversary event were U.S. Coast Guard Veteran Carroll George, 95, and U.S. Navy Veteran Jack Cassidy, 99. Cassidy was aboard the USS Idaho when the battle broke out. He stayed in the Navy 16 years after the war ended, retiring as a Commander. George, who says he is the oldest living graduate of the U.S. Coast Guard Academy, served in Okinawa aboard the USCG Cutter Taney, which was being used as the command ship for Rear Adm. Calvin Cobb.

Read more about the 70th anniversary event from Stars and Stripes.