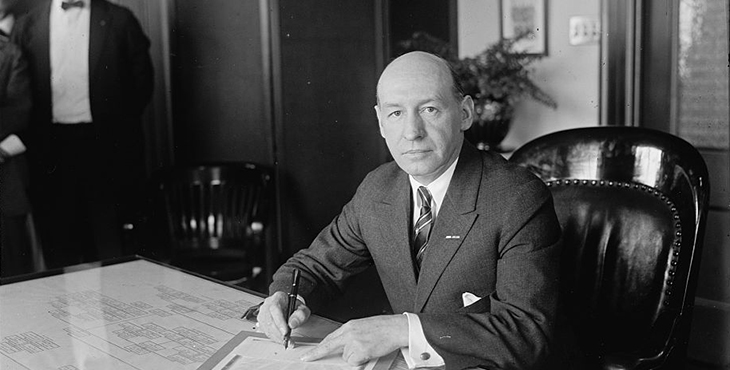 Frank T. Hines was born in Salt Lake City, Utah, and during his second year at the Agricultural College of Utah, in Logan, he enlisted in the 1st Utah Volunteer Artillery. He served with distinction in the Philippines during the Spanish American War and, after the war, he was commissioned as a second lieutenant in the artillery corps of the regular Army. In 1904, he was promoted to first lieutenant and in 1908 was a captain in the Coast Artillery Corps. In 1912, he was detailed to the Quartermaster Corps.

During World War I, Hines was promoted to major and detailed to the general staff. In February 1918, he was promoted to lieutenant colonel. President Woodrow Wilson nominated him as a brigadier general in April 1918 and placed him in charge as chief of Embarkation Services for the Army. He received the Distinguished Service Medals from both the Army and Navy for his proficient work during World War I.

Gen. Hines took the helm of the U.S. Veterans Bureau in March 1923 just as his predecessor, Charles Forbes, departed in a scandal. Within months of Hines’ arrival, a storm was brewing over how a new Veterans hospital being built in Tuskegee, Alabama, specifically for African Americans would be staffed. The African American community wanted African American doctors and nurses; the Ku Klux Klan wanted it staffed by whites. Protests, parades, death threats and terror kept the new hospital in the public eye for months. That summer, Hines made the historic decision to staff the new facility with African American medical professionals.

Brig. Gen. Frank T. Hines receiving a poppy in 1925. Photo courtesy of the Library of Congress.

Hines steered the Veterans Bureau and Veterans Administration through some of their most challenging early days:  the Forbes scandal, the Great Depression, the Economy Act, the Bonus Army marches, the first and second mergers of federal veterans’ programs, the largest federal hospital construction program in history (at the time), opening of benefits to Native Americans and women, transition of national homes into VA hospitals, and the G.I. Bill’s first year of implementation.

He was physically attacked by Veterans on several occasions and considered quitting at least twice—in 1924 and 1930. Despite constant challenges, he persevered and became one of VA’s most revered leaders.

At the end of World War II, a changing of the guard took place at VA as Gen. Omar Bradley replaced Hines. Hines was appointed as Ambassador to Panama and served two years before retiring to serve as a military consultant on the executive committee of the Acacia Mutual Life Insurance Company. In November 1950, he had a stroke which left him partially paralyzed and ten years later, in March 1960, he suffered a fall and was treated at Mount Alto VA hospital, the first VA hospital in Washington, D.C.

He died on April 3, 1960 and was buried in Arlington National Cemetery.

Editor’s note:  This “Looking Back” article is the first in a series of stories featuring the history of the U.S. Department of Veterans Affairs.