How $1.4 billion in budget cuts will impact Veterans 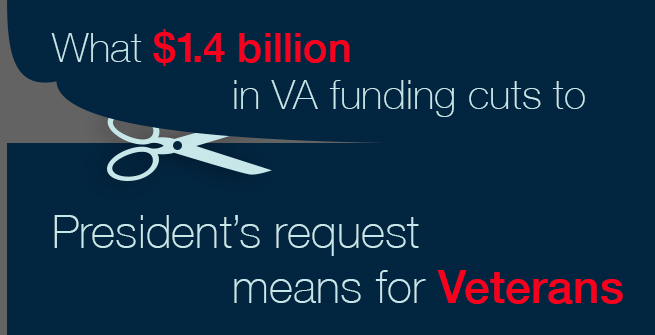 While some may argue this is not a drastic move, every cut and rescission of funds has real-world implications for Veterans across the country. Here are three ways these proposed congressional cuts will adversely affect the quality of care and services provided to Veterans next year if they are not reversed:

The Veterans Health Administration has expanded access to care, completing more than 46 million appointments between May 1, 2014, and Feb. 28, 2015. That’s an increase of 2 million more completed appointments than during the same time period in 2013-2014. VA has also begun to turn the corner on wait times – 97 percent of appointments are completed within 30 days, including 12 million same-day appointments.

The 2016 House proposal reduces VA medical care by $690 million. What does this mean? As a result of the overall cut to medical services, an estimated 70,000 fewer Veterans will receive the VA care they need.

Also wrapped up in the cuts to medical care is a reduction of $582 million to address VA’s high priority construction projects. This cut will reduce VA’s ability to provide additional outpatient services and will impact four major construction projects, including the long sought-after French Camp Community Based Outpatient Clinic in Livermore, California.

The National Cemetery Administration is consistently rated top in customer satisfaction for its work in honoring our nation’s Veterans and maintaining 3.3 million grave sites across 131 cemeteries. Proposed cuts would eliminate funding for several key cemetery expansion projects, reducing our ability to provide burial honors for as many as 18,000 Veterans and eligible family members each year.

Editor’s note:  This blog was updated to include a release from the Office of Management and Budget.