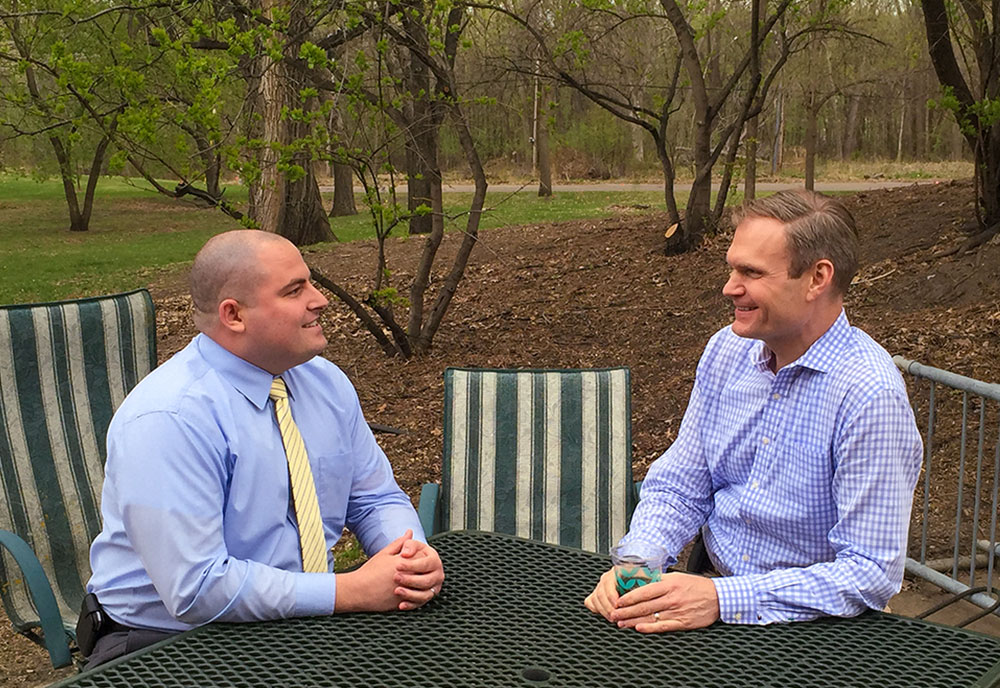 Veterans Adam Anicich and Andrew Clark appreciate, more than most, the significance of the 10th anniversary this week of VA’s Polytrauma treatment program.

The both served in Iraq and both experienced explosions that left them with traumatic brain injuries (TBI).

Anicich: “I sustained a TBI when I fell from the top of a piece of cargo handling equipment after a mortar hit near our position. The driver likely jerked the steering wheel in response to the explosion, causing me to fall about 20 feet onto the hard-packed gravel.”

Clark: “During my second deployment, we were getting mortared on a daily basis. Most of the rockets shattered upon impact, thankfully, because I was only a couple of feet away. Unfortunately some went off close enough so that the power of the concussion knocked me down.”

“These people listened and cared.”

For ten years, VA has dedicated a unique program to treating Veterans with TBI and other health issues.

It ensures that Veterans and Servicemembers transition seamlessly between Department of Defense and VA medical facilities and back to their home communities.

The Polytrauma System of Care programs specialize in medical rehabilitation for TBI and polytrauma, which is defined as multiple severe injuries.

The services include assessment and treatment by teams of rehabilitation specialists, case management, patient and family education and training, psychosocial support, and advanced rehabilitation and prosthetic technologies.

Anicich, a native of Orange County, Calif., wanted to share his story, “In the hope that it encourages other Veterans to come forward, and I want it to bring positive light to the amazing work VA Polytrauma clinicians are doing for Veterans every day.”

“Dr. Joel Scholten and my Polytrauma Team at VA are my safety net. I know I can push myself as hard as possible in my recovery and treatment because I have a team of professionals behind me. Supporting. Coordinating. Facilitating. Helping.”

“Returning to the U.S. after deployment was challenging,” he explains. “I was unable to do the same type of rigorous work others were able to do. People knew there was something different about me — something ‘not right’ — but they were unable to put a finger on it. They could see the physical injuries in my movements, but did not understand the cognitive difficulties or how severe it was.”

Anicich adds, “It was frustrating to have known my life and capabilities before Iraq, and now have to live with the ’new normal,’ having people around you tell you that everything will be fine. ‘Just give it time.’”

“However, I was unable to find that person.”

Anicich realized he was having trouble concentrating, remembering people, places, names, and events. He had trouble with angry outbursts and losing his patience.

“I had challenges in cognitive functions and making decisions. The easiest of choices disrupted my entire day.”

Important to Understand the Signs

It has been said that traumatic brain injuries — caused by improvised explosive devices, mortars, vehicle accidents, grenades, bullets, mines, falls and more — may be the hallmark injury faced by Veterans of Iraq and Afghanistan.

Even those who were not obviously wounded in explosions or accidents may have sustained a brain injury. It is important that Servicemembers, their families, and the community understand some of the subtle signs, and seek screening at their local military or VA health care facility.

Andrew Clark joined the Air Force in 2001 and served two tours in Iraq. He recalls his struggles after his combat concussion. “I can remember vivid details from some things in the service, but now I am often forgetting to eat, conversations, locations, and what day it is.”

“I struggle with speech at times, often dropping things. At times, simple math can be near impossible without a calculator. My frustration builds when I forget to do tasks in a timely manner: at work, getting ready in the mornings, and other around-the-house things.”

Clark adds, “Having to have a caregiver can be depressing, but I’m very thankful for this VA program which keeps me mostly independent and alive. Not understanding my medical issues was the biggest challenge I faced.”

“The VA literally saved my life. I keep in communication with one of the best neurologists in the country, Dr. Victor Dostrow, and I am blessed that the VAMC Asheville hired him.”

“And if it wasn’t for my VA mental health doctor, Dr. Bruce Purvis, who had me start a medical journal, none of my small seizures would have been identified and I would not have overcome the other challenges, struggles and frustrations.”

Today, Andrew is a photographer and active with the Disabled American Veterans, “An incredible organization that gave me a purpose in life.”

VA has 110 specialized Polytrauma rehabilitation sites across the country:

Adam Anicich remembers when he first came to VA for help. “I walked into the West Los Angeles VA Medical Center and within five seconds, a VA greeter asked me how I was doing and how they could help. I murmured that I think something is wrong, and I might need to talk with someone. They immediately sat me down with a great team of clinicians who began the arduous task of reviewing where I was with regards to treatment and recovery, and identifying the areas in which VA could help.”

Today, Anicich focuses his efforts on bringing awareness to issues affecting returning Servicemembers as an advocate for Veterans afflicted with TBI and PTSD, as a speaker on reintegration topics, and as an advisor to VA on polytrauma and pain management.

As he puts it, “The most exceptional reward I can ever get is a ‘thank you’ from a Veteran for something I have done.”

This article was originally published on Inside Veterans Health.