Home / Health / How Do You Save Someone’s Life?

How Do You Save Someone’s Life? 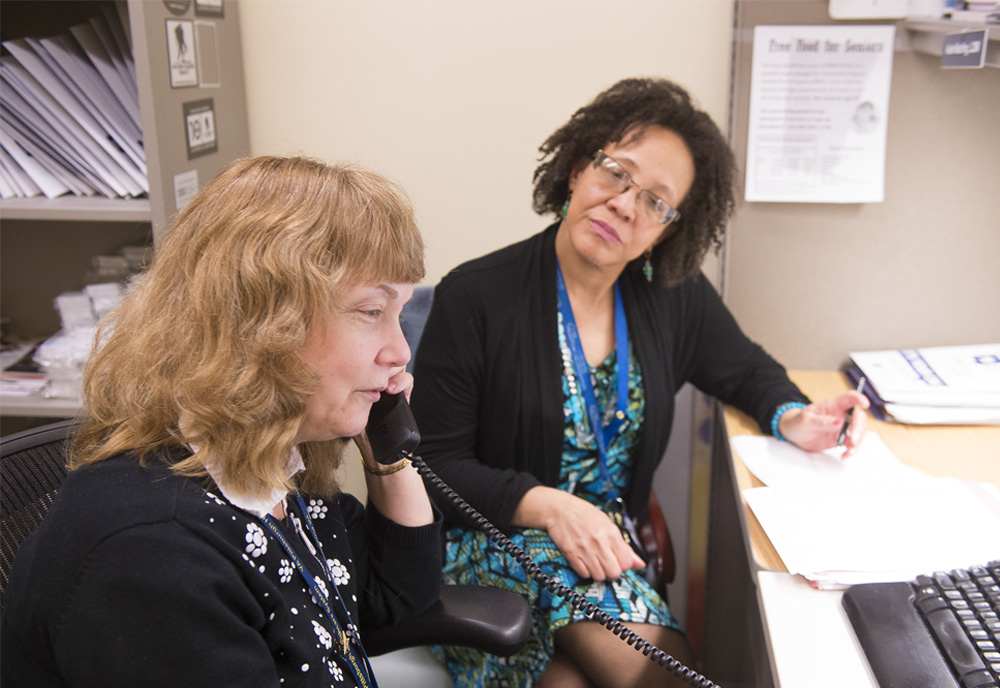 The phone rings. You answer it. The Veteran on the other end of the line tells you he’s alone in his garage, and he’s about to put a handgun in his mouth and pull the trigger.

A Navy Veteran, Lucious has been working at the suicide prevention office since 2009. “You also want to find out where they are,” she added. “That’s important. I can’t send someone out to help you if I don’t know where you are.”

Once she pinpoints your location, Lucious contacts the VA police, who then coordinate with local police to get officers to your location as quickly as possible.
But not all the calls are quite that dramatic.

“One Veteran called us to report that his utilities had been cut off,” Lucious said. “But you have to realize it’s not just the utilities. There’s other stuff happening in this person’s life, and now his utilities are cut off and it’s the last straw. You need to listen to what he’s saying, and you need to ask the right questions to determine if he’s feeling suicidal. Some of these calls can go two or three hours.”

Krista Mechling, Pittsburgh’s suicide prevention coordinator, said the loss of a relationship seems to be the number one factor in pushing someone over the edge.

“We had a 28-year-old Veteran who killed himself because he and his cyber girlfriend broke up,” Mechling reported. “He sent her money so she could come see him. He was convinced he’d found the love of his life. She was the one. But she took his $10,000 and he never heard from her again. He was devastated.

“It’s sad, because he was lonely, and suddenly there was some hope being dangled out there in front of him. Then it was yanked away. This happens more than you think. A lot of these younger Veterans look to the Internet for their support. It can be a dangerous place for them.”

But depression and despair play no favorites when it comes to age.

“We had an 84-year-old Veteran who had to put his wife in a nursing home,” Mechling said. “They had been sweethearts in high school. But she got brain cancer, and he couldn’t take care of her anymore. One day he went to visit her in the nursing home and she didn’t recognize him. He went home and shot himself. He felt like he had failed her. He felt like he had abandoned her.”

Mechling said it’s the success stories, however, that keep her going.

“I had one guy calling me from his balcony, ready to jump,” she said. “His wife was there with him and she knew what was happening, but she didn’t care. She thought he was just crying wolf again.”

So was he just crying wolf? Was this particular Veteran addicted to drama, or was he serious?

“This guy had called me before, so I knew him,” Mechling said. “He’d actually jumped off a bridge six months earlier. But the river mud he landed in cushioned his fall. Still, he had jumped, so I knew he was a doer and not just a talker. He told me he had gone off his meds, that he and his wife had just had a terrible fight, and that he was frustrated. Then he told me he was jumping now — right now — and that’s when his phone went dead.”

“My philosophy is to be kind to everyone, because everyone is going through some kind of battle.”Veronica Lucious

As it turns out, the Veteran had hurled his cell phone off the balcony, not himself. But thanks to Mechling, first responders arrived minutes later and took him to a local hospital.

“Now he’s at our VA in Clarksburg getting treatment,” she said. “I don’t know if I saved his life. Maybe I did. Maybe something I said kept him from jumping. I don’t know.”

Veronica Lucious, who sits right next to Mechling at the suicide prevention office, has no doubt her friend saved the Veteran’s life that day. “He called your direct line,” she reminded Mechling. “He wanted to talk to you.”

Lucious noted that every call is different, and that sometimes different tactics need to be used if a suicidal Veteran isn’t responding well to what you’re saying.

“One suicidal gentleman called me and told me he wasn’t at home, but he wouldn’t tell me where he was,” she said. “He called me about four or five different times, but refused to give me his location. I was getting frustrated, because I was trying to encourage him to come in. Finally, toward the end of the day, I said to him: ‘You tell me where you are right now!’ I didn’t say it mean, but he could tell I meant business. Right away he told me exactly where he was.”

Recalling the incident, Lucious laughed. “I had the police go out and pick him up. He’s okay. He still calls me. He calls me at least once a week.”

“Those are the ones that haunt you,” Lucious said. “We had a young woman, an Army Veteran, commit suicide. I had talked to her twice that morning, on the day she died. First her friend called and told us this young woman was having trouble. Then the young woman herself got on the phone and we talked.

“A little later that morning I called her back to see how she was doing and to encourage her to come here to get help. She didn’t make it. She killed herself, and I’ll never know why. My heart broke. Everyone’s heart broke.”

She added quietly: “I’m still processing that one.”

Lucious said that in the realm of suicide prevention, you have to accept the fact you have only so much control over what another person might do.

Are you a Veteran in crisis or know someone who is? Call the Veterans Crisis Line at 1-800-273-8255 (Press 1) or visit www.veteranscrisisline.net.