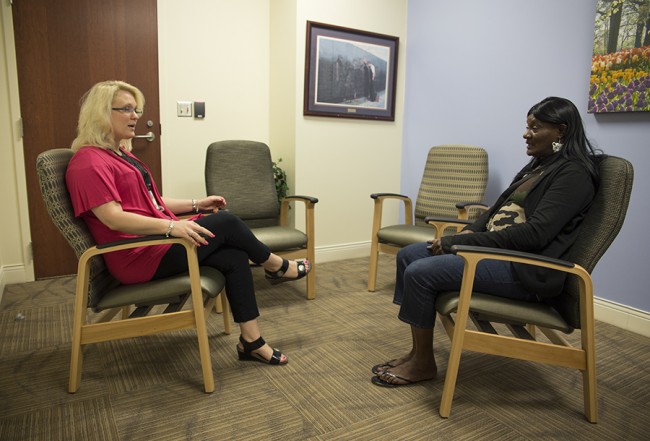 Understanding and identifying risk factors among patients who receive care is a top priority for clinicians and researchers in VA’s Veterans Health Administration (VHA). This is especially true when developing and analyzing the effectiveness of treatment for those most susceptible to suicide.

In the past eight years, VHA has enhanced mental health services across its system and supplemented it with specific programs for suicide prevention – like the Veterans Crisis Line. However, until recently information on suicide among all Veterans was not available. Earlier this month, a study on the changes in suicide rates for Veterans and non-Veterans was published that included indications that VHA patients were experiencing positive outcomes from care.

“Going into this study, we thought we would see a higher rate of suicide among VHA users,” Dr. Robert M. Bossarte said. “This is because sickness is a risk factor for suicide, and the basic assumption was that those seeking care would be at a higher risk than those who weren’t. The data showed the opposite was true: VHA users had a lower suicide rate than non-VHA users.”

Most importantly, according to Dr. Bossarte, the numbers—which were compiled from data provided by 23 states and VA’s Suicide Repository—pinpoint the population that is best helped by care and outreach initiatives. In this case: women Veterans.

Male Veterans also saw reduction in suicide rates, about 20 percent, for those who used VHA services.

“I think it’s important to understand that the enhanced care that we provide at VA is making a difference,” Dr. Caitlin Thompson, Deputy Director for Suicide Prevention, said. “This study—which is the first in comparing suicide rates between both Veterans and non-Veterans and VHA users and non-VHA users—shows that VA treatment works. There is still much work to be done, especially for our Veterans who do not receive VA care. Through the information from this study, we can continue to better tailor our suicide prevention efforts so that we can ensure that ALL Veterans remain safe.”

One Veteran suicide is too many. Although the overall data shows Veterans are at higher risk for suicide than the general U.S. population, this study lays the groundwork for further research and proves VA’s efforts to curb suicides, especially when Veterans are in crisis, are making a significant impact.

Dr. Claire Hoffmire, lead investigator for the study, noted their ability to identify differences in suicide among Veterans who do and do not use VHA services is only possible because of the data obtained through partnerships with states and provides an opportunity to greatly increase understanding of risk for suicide among Veterans.

“Results from this study raise many important questions about suicide among women Veterans who do not use VHA services,” Dr. Hoffmire said. “However, we now have an opportunity to begin answering those questions”.