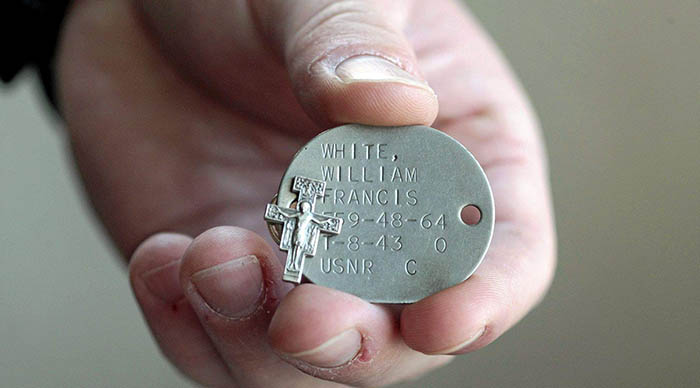 Fifteen years ago, a 10-year old California boy found a set of World War II era dog tags laying in the dirt. He picked them up, took them home and put them away. Now, the 25-year old U.S. Coast Guard reservist wants to reunite the dog tags with their owner or his family.

Mario San Paolo shared his story with The Monterey Herald, who then reached out to VA for help in making a connection.

According to the Herald, San Paolo just 10 years old when he found a set of World War II-vintage military dog tags laying in the dirt outside a swimming pool. He recently found them in the box he’d put them in all those years ago.

“There’s a subdivision just off Highway 156 … right outside Castroville, [Calif.], and my sister was a lifeguard at the swimming pool there, so I’d go swimming while she was at work,” San Paolo, told the paper. “I saw the dog tags lying there in the dirt one day, just outside the pool — they looked like they’d just been dropped there — and I just remember thinking, ‘Hey, cool … this is what GI Joe wears!’”

Now, San Paolo has served for six years in the U.S. Coast Guard Reserves, including a 10-month deployment with the Joint Task Force at Guantanamo Bay, Cuba. He told the Herald his service has instilled an appreciation for the what the dog tags signify, and he’d like to find a way to return them to the Veteran or his family.

The name on the tags is that of William Francis White, a member of the U.S. Navy Reserves. According to information on the tags, it appears White served in the Navy reserves during World War II.

“When I saw those tags again after serving six years in the Coast Guard Reserve, I obviously had a much-better appreciation of their importance,” San Paolo told the newspaper. “I’d really like to get them back where they belong.”

If you know William Francis White or members of his family, leave a comment below — we’ll get the information to The Monterey Herald. You can also help by sharing this story on social media — we have posted it on VA’s Facebook page, as well as Twitter and Instagram.

US Coast Guard reservist seeks to reunite #WWII dog tags with Veteran, family. Can you help? Read about it at vaww.blogstest.va.gov