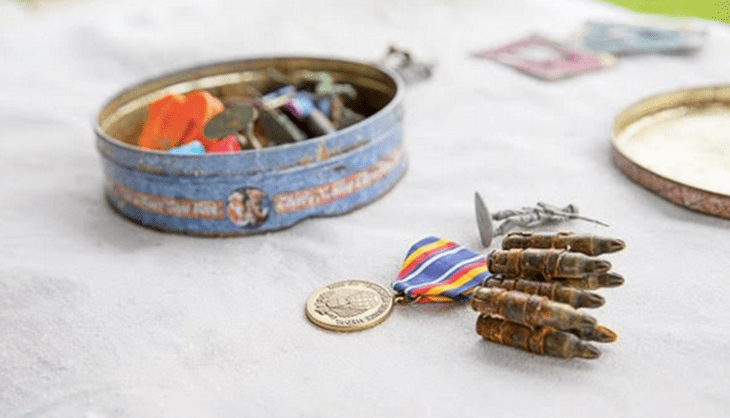 Editor’s Note: This story by Melissa Whitworth is cross-posted from The Ithaca Voice and is part of a series, “Hope on the Homefront,” about Veterans in the Ithaca, N.Y., area. Read the series introduction here. Photos by Dave Burbank.

It’s still dark and the roads are empty when Kynna Murphy, armed with a huge Thermos of coffee, pulls into the parking lot of Tompkins County Jail. She left home at 4 a.m. this morning.

She shuffles files on her lap and pops them into her “jail compliant” briefcase – no staplers or zippers allowed. A VA identity card hangs around her neck on a black ribbon. Her task this morning, as it will be up to 14 times this and every week: Collect a Veteran and, with court approval, deliver him or her to a treatment facility or hospital.

Kynna Murphy is the VA’s Veterans Justice Outreach Coordinator. “You don’t have veterans courts in your area. You have me,” she says. Photo by Dave Burbank.

The man she is picking up is a Vietnam era Veteran who was arrested 12 hours ago for evading arrest and leading police on a car chase. He had called 911 in distress and said he was going to commit suicide.

When the police arrived, he had a change of heart and fled. He was charged with a felony, which was later reduced to a misdemeanor.

Most of the Veterans who come into contact with the police in our area are arrested for non-violent crimes: petty larceny, DUIs, disorderly conduct, those types of things, Murphy says.

“You don’t have veterans courts in your area. You have me.”

At any one time there are 100 veterans sitting in our local county jails. The Tompkins County Jail on Warren Road is overcrowded. It houses 85 men – although it was built for 75.

The statistics for Central and Upstate New York mirror those of the country: ten percent of the incarcerated population has served in the military, according to the U.S. Department of Veterans Affairs and the Bureau of Justice Statistics.

Murphy is the VA’s Veterans Justice Outreach Coordinator, based in Syracuse. She oversees 14 counties, including three judicial districts, between Binghamton and Syracuse – and as far north as Watertown.

“You don’t have veterans courts in your area. You have me,” says Murphy. (As this piece went to press, Binghamton announced that the city would start a Veterans treatment court. The first in the country opened in Buffalo in 2008).

Four years ago, Murphy – a trained social worker who ran the Hutchings Psychiatric Center for ten years – helped her first veteran get addiction treatment up in Jefferson County.

“I walk into the jail cell. There is this petite young man sitting on the floor, very cold and sad and tired. He says, ‘Three days ago I was at Fort Drum, I had just come back from Afghanistan.’ Three days ago! ‘And now I am in jail’. I said, ‘Why are you here?’ He replied, ‘I don’t know.’ He was 23 years-old, but he looked about 16.”

Trying to keep veterans out of local jails

Now Murphy oversees 10 jails across the area. All of them have made an agreement to contact Murphy when they come across a Veteran. When an inmate is booked in – at Murphy’s insistence – the officer will ask, ‘Have you ever served in the military?’ The names of the Veterans get dropped into a database and faxed to Murphy once a week.

“I am looking to see if the person had police contact because of a mental health problem or a substance abuse problem. Or if it was something to do with living on the street – disorderly conduct, public intoxication, those kinds of things”.

She has 200 people on her books at any one time, making treatment recommendations to the numerous courts across Central New York. Once the Veteran is released into her care, she monitors each case for an average of three months.

Since January, Murphy has kept 165 veterans out of the jail system and personally driven them from county jails to treatment centers across the area. In the four years she has been doing this, she’s helped approximately 1,300 Veterans.

“When people are in the military they are treated like machines. They are ‘owned’ by the military and are given [prescription] drugs or whatever they need and told ‘Just go. Just do it. Here’s medication for the pain, for sleeping, for anxiety.’

“The adjustment from the military to civilian life is tremendously hard for most people.”

“Then when they get discharged, they are put back into their family, or into their job and told, ‘OK, now go back to being a husband and a father and a partner.’ They don’t know how to do that anymore. They don’t know how to pay the bills, go to the grocery store, or be a husband again. These are things that are overwhelming. The adjustment is tremendously hard for most people.”

22 Veterans commit suicide per day, or one every 65 minutes, according to the VA. That is 30 per 100,000 of the population per year, compared with the civilian rate of 14 per 100,000. “The suicide rate for Veterans is very high,” says Murphy. “The suicide rate for people in jail is also very high. So then if you are a Veteran in jail that sky-rockets. Some of these people I am just seeing for their safety.”

But at 6 a.m. most mornings, Murphy is not thinking about statistics or numbers or even the reason why the Veteran ended up in jail.

Melissa Whitworth is a freelance journalist, specializing in features and profile interviews. This article originally appeared in The Ithaca Voice.