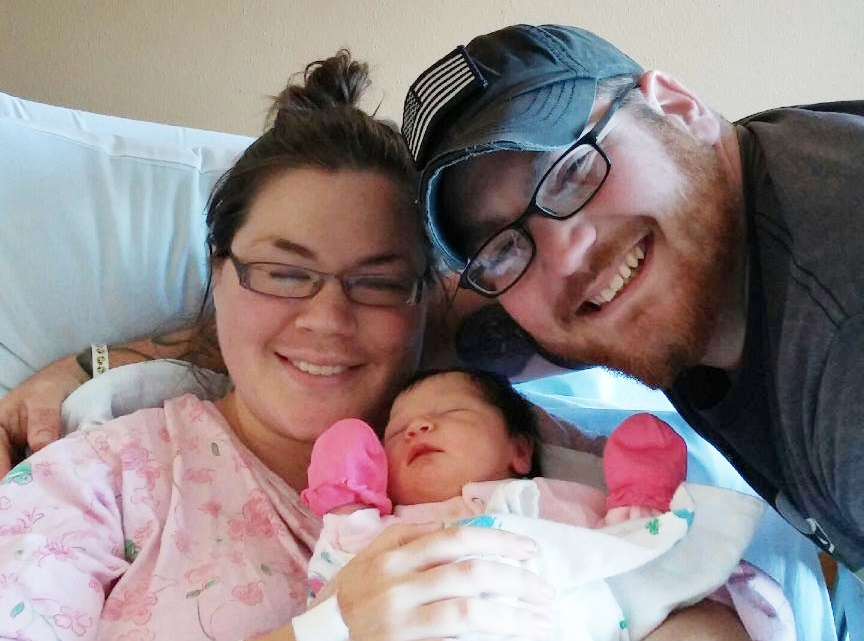 When Caleb Clark returned from Iraq, he couldn’t quite figure out what was going on.

“There were a lot of instances where I was wondering why my heart was racing, why my blood pressure was going up, why I was blacking out,” said the 24-year-old Army Veteran. “I thought I’d get over it eventually. But it just kept getting worse. There was more going on than I realized. Something was wrong —really wrong.”

Because of his inability to control his anxiety, Clark had difficulty finding and keeping a job, and paying bills. Eventually he and his girlfriend Alysse were evicted from their apartment.

“I would just walk off jobs if something happened that triggered me,” Clark explained. “I’d get overwhelmed and just leave. No notice, no nothing. I was like a Ninja. I was just gone. And then when they’d call to see where I was at, I wouldn’t answer the call. I felt like I was a target and they were hunting me down.”

Clark and Alysse had no place to live but his pick-up truck. Life was getting bleak in a hurry.

“Even the truck was breaking down,” said Alysse, 24. “Everything bad that could possibly happen to us was

happening all at once.”

“We were living in my truck and I was working three jobs,” Clark said. “I was detailing cars, doing stucco work, cooking in a general store. Anything I could do, I was doing. Two days after we became homeless we found out Alysse was pregnant. I told her, ‘You can’t be pregnant and be homeless with me.’ So we found her a shelter to stay at.”

Alone in his truck without Alysse, Clark began slipping into a dark place.

“I just started having some real depression,” he said. “The anxiety had been there for a while, but now it got to a point where I became suicidal.”

It didn’t take long for Clark’s suicidal thoughts to transform into a concrete decision to end his own life. Before doing so, however, there was someone he needed to see.

“I went to the shelter to see my girlfriend one last time,” he said.

“I had no idea he was coming to say goodbye,” Alysse recalled. “That was the day of my ultrasound, so I thought he just wanted to come with me to my ultrasound.”

“The lady who runs the shelter figured out that something must be wrong, because she got me on the VA crisis line,” he explained.

It was the phone call that would change Clark’s life. Following his conversation with a crisis line counselor, he enrolled in an eight-week residential PTSD program at the Waco VA.

“That was the best program for me,” said the former Army specialist. “There’s eight of you that go through the program at the same time. We all went through it together. You have to open up to each other about your experiences.

“There’s a social worker and a psychiatrist who run the discussion groups,” he continued. “And even when they’re not leading a group, you can talk to them whenever you want, which really helps. They want you to think about your experiences, talk about them, and write about them.”

Clark said the key to the whole program is the friendships that are formed during those critical eight weeks.

“It’s life-changing,” he said. “You don’t feel alone anymore, because there’s other Veterans to talk to, and relate to. All the guys who were in that group with me, I’ve got their phone numbers and I talk to them every week. You show up there with no friends, and you leave with the best friends you ever had in your life. Veterans need other Veterans they can talk to. You need your buddies.”

“The support system after the program ends is absolutely crucial.”

Clark emphasized, however, that it’s what happens following the eight-week program that really matters.

“In the program is where you face your demons,” he said. “They teach you how to face your demons. But after the program ends, the main thing is having support, having people you can talk to. I’ve got a great support system now. So whenever I feel like leaving a job, I have people I can call. They can talk me down, get me back to normal. They can help with the anxiety and the fear.”

Clark, who joined the Army at 17, said he understands why so many Veterans are reluctant to ask for the help they desperately need.

“In the military they train you to handle things on your own,” he said. “So a lot of Veterans don’t ask for help because it’s ingrained in them to go it alone. So they isolate. And isolating yourself is the most dangerous thing you can do.

“I was almost a statistic,” he added. “But I want the Veterans out there to know it doesn’t have to be like that. I was as low as possible, and now I’m doing fine. When I finally asked for help, all these people were there for me. They showed me that they cared about me.”

To learn more about how VA is helping Veterans with PTSD, visit www.ptsd.va.gov