‘Guitars for Vets’ a Big Hit at West Virginia VA 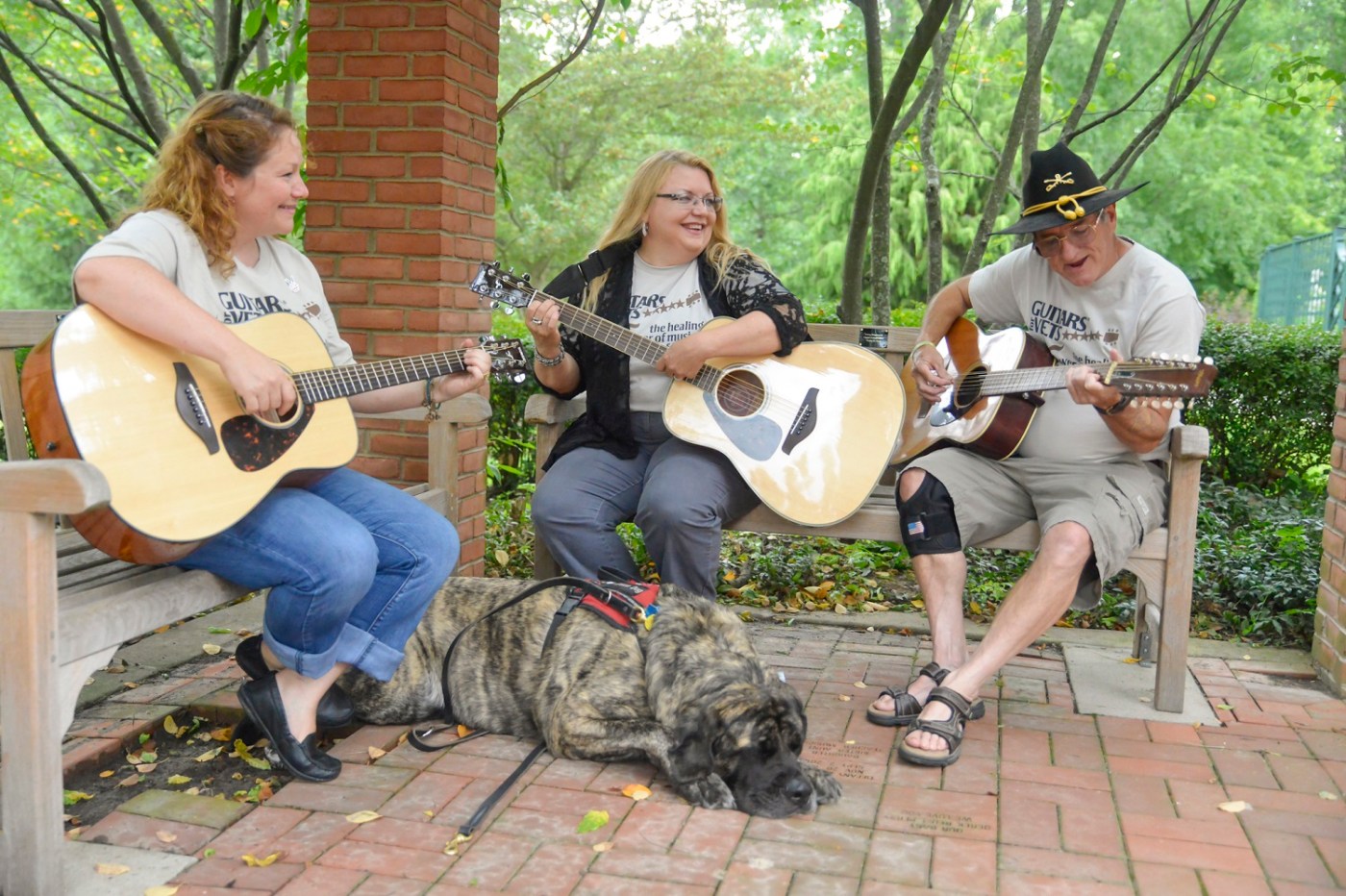 Anastasia Hilvers and Roberta Laxton are friends. Both are Army Veterans. And both were looking for a new and different way to help heal their wounds.

“We refer to ourselves as Battle Buddies,” said Anastasia, 55. “We both have posttraumatic stress disorder (PTSD) and military sexual trauma. And we were both seeking right brain-based therapy to get some relief that was not based on pills or psychoanalysis.

“We originally wanted to try art therapy,” she continued, “but they didn’t have that at the Clarksburg VA Medical Center (VAMC). Then we asked if we could try this new program called Guitars for Vets. I had never even held a guitar, but I said I would show up with a good attitude and keep showing up. I promised Roberta I wouldn’t quit no matter what.”

“This was a perfect opportunity for me because I’d always wanted to play the guitar,” said Roberta, 38. “The first week we learned two chords. And when we weren’t in class, Anastasia and I practiced together, usually once a week, sometimes twice a week. It was quite fun.”

“Our mission is to put a guitar in the hands of every Veteran who needs an alternative means of dealing with their issues,” he said. “I have four instructors here at Clarksburg and they’re all volunteers. We teach basic chords, basic strumming techniques. We give each student a guitar to practice on. Then at the end of the 10-week course you get a brand new Yamaha guitar.”

Trivett said he’s quite proud of his first class of graduates.

“Roberta and Anastasia were our first two students,” he said. “They were the pilot program, and they both worked really hard. They hung in there. They were diligent.”

“When I’m practicing on the guitar, it gives my mind something to focus on,” said Roberta. “It lets me release these emotions and memories that I can get stuck on. That’s what can happen when you have PTSD; I call it getting ‘stuck.’ Sometimes it can linger for a day, or a week. But the guitar lets me release all that. It’s helped me move on.”

“I started reaching for the guitar instead of the pill bottle.”

Her friend Anastasia agreed. “Guitars for Vets provided me with a scaffold to build upon, which really helped me in other aspects of my therapy,” she said. “The instructors were so nice and tried to encourage me. I kept telling them that I’m awful at guitar, and they kept telling me I wasn’t.”

The Army Veteran said she’s also grateful to the instructors for remaining calm and helpful during an unexpected incident that occurred during one of the classes.

“One day I had a full-blown panic attack right there in the music room,” she said, “and the instructors helped me get through it.”

“It can get emotional in there,” Roberta observed. “Music can release a lot of emotions. There were some moments when the instructors needed to provide some emotional support for us, and thank God they were able to do that.”

“I’m a graduate of the Guitars for Vets program,” said Bill Trivett. “I got into the program six years ago because I have PTSD. When I first went into the program I was taking four to six Xanax every day for anxiety. But then I started reaching for the guitar instead of the pill bottle.

“The program works,” he added. “It’s one of the best avenues for dealing with PTSD I’ve ever seen. It helps you get away from all the crazy stuff that’s going on between your ears.”

So how did Anastasia and Roberta do in the class? Were they natural musicians? Are they headed for stardom?

“Anastasia was very doubtful of her abilities when she first started,” Trivett said. “She told me one day, ‘Billy, I don’t really think I should be getting a graduation guitar. I can’t even get the basics!’ But the very next week she came in and you could tell she’d been practicing. She could change chords like you’re supposed to.”

But what about Roberta?

“On week four or five Roberta came in and she’d already written a song,” Trivett said. “Her song is called ‘Blisters.’ It amazed me. I was in the program four years before I even tried to write a song.”

By Roberta and Anastasia

It’s time.  It’s time for me to practice, I’m not going to give up, even though it feels like my fingers are cut.
Ow.  Ow.  Ow.  Ow.
One, two, three, four
Guitars for Vets is the program I’m in, it’s helping me relax a lot better than Gin.
Holding this guitar is hurting my wrist, if I don’t get better you know, I’m going to get pissed.
Ow.  Ow.  Ow.  Ow.
My struggle was the strummin ma-a-n, I was feelin dumb. On top of all that now my fingers feel numb.
Guitars for Vets seems to help with my thinkin.  Yeah, it made my fingers hurt but I’ve eased up on my drink-in…
Ow.  Ow.
We don’t play very good but we keep showing up, just like with life girl, never give up.
These cords finally feel like they’re not breaking our hands.  Because we…
Kept on practicing and now we’re a band!

The Agony and the Ecstasy

“The song ‘Blisters’ is an allegory about the challenges and triumphs Anastasia and I experienced during the 10-week Guitars for Vets program,” Roberta explained. “At first I put together a few silly lines mocking the physical challenges that had been unexpected: the soreness of our wrists and fingertips, the stretching of our hands enough to play a chord. Then during much time practicing I experienced the other side, the therapeutic value side. The emotional relief I felt during this program was enormous.”

But ‘Blisters’ isn’t Roberta’s only composition.

“I’ve also written a song about my trauma,” she said. “So the music is serving as another outlet to get my story out. This is the first time I’ve ever been able to write it down, to put it in words.”

“At our graduation ceremony Roberta and I put on a concert,” Anastasia announced proudly. “We played Folsom Prison Blues, but I only played one note the whole song. It was E Major. I just couldn’t switch chords fast enough. But I sang. I sang my little heart out.

“About thirty people were there,” she continued, “and they wanted us to do an encore! So we did an encore. We played Folsom Prison Blues again.”