Home / Health / Artist at Blind Rehab sees his way through

Artist at Blind Rehab sees his way through 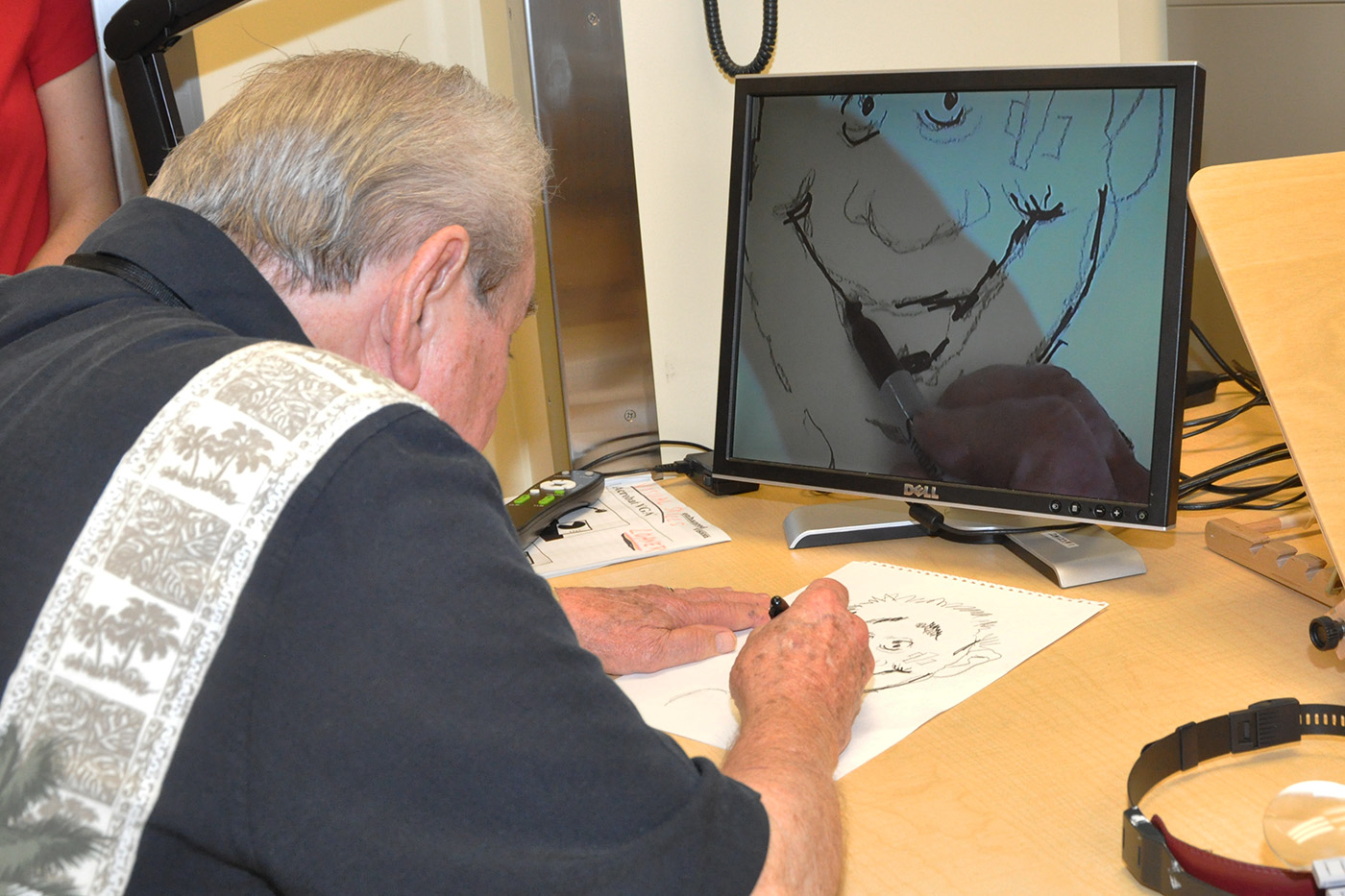 Imagine, if you will, what the life of an artist must be like. Have you ever wondered how they are inspired? Do they wake up with visions in their head that they must draw? If art is your livelihood, does that kind of pressure affect your creativity? And what happens when you can no longer create?

For lifetime artist Charlie Swan, he knew at the young age of 8 that his passion was drawing, painting, sketching…anything that involved expression through his hands, his mind, and most importantly, his eyes. It was his passion for art that landed him the job of Illustrator when he joined the Air Force in 1952. On his way to his overseas assignment, he was aboard the USS Mann. He sketched a cartoon for the Navy’s newsletter that resulted in him being called to the Skipper’s office and the rest, as they say, is history.

An image of Veteran Charlie Swan.

“I had no idea why the Captain wanted to talk to me,” Swan said. “I figured I had done something bad…really bad. But you don’t say no to a request like that, so in I went.”

That meeting turned out to be a focal point in the next 50 years of Charlie Swan’s life as the Captain told him he had seen his cartoon in the newsletter and he wanted to tell him how impressed he was.

“He told me I was a good artist and that I should be sending my cartoons to Stars and Stripes which was a big deal,” Swan said. “So I did.” Swan’s cartoons were published in Star and Stripes regularly after that.

Swan left the Air Force when his tour was up and, with the confidence that was made stronger through his experiences (Captains are never wrong) he was hired as an illustrator for a contractor at NASA in Bay St. Louis, Miss. (now known as Stennis Space Center). For the next 34 years, working with one NASA contractor or another, Swan continued to delight and amaze his co-workers, friends and family with the work he created. His larger than life murals still decorate the halls and walls at the Stennis Space Center and his legendary caricatures brought joy and countless smiles to so many.

“Through the years, and this sort of evolved, I got quite famous for my caricatures.” Swan said. When an employee was retiring, I had his or her co-workers send me all sorts of things about that employee and then I would sit down and sketch out the caricature. I would capture the person’s whole career with all the things co-workers shared with me. “

Swan also created Stennis’ mascot, a friendly-looking alligator, and that is still being used today.

Swan retired in 1997 but continued his involvement with art, continuing to produce award winning pastel, watercolor, oil, acrylic and mixed media paintings. More than 1,500 Charles Swan portraits, landscapes, still lives and contemporary paintings, and character paintings hang in private and public collections worldwide. He has served the art community as two-time past president of Mobile Art Association and for years, he judged, taught, and spoke publicly. Through all this though, something was changing in Swan. He began to lose sight in his right eye.

“I’ve never had good sight in my left eye,” Swan said. “But my right eye compensated and it never was more than just a hindrance. But in the last couple of years, my vision started getting worse and worse and I started using a magnifying glass to do things. Then the headaches started. Next thing I know the doc tells me I couldn’t drive, that’s how bad my eyesight had gotten. I knew I was in trouble.”

Swan’s life was pretty much in a downward spiral at this point. He couldn’t paint or sketch and he hadn’t read a newspaper or book in almost a year. That all changed when his VA doctor at the Mobile Community Based Outpatient Clinic in Mobile, Ala., told him about the Blind Rehabilitation Center, which is located at the Biloxi VAMC in Biloxi, Miss. He suggested he give it a try.

“He is not the same person he was when he came in here a month ago,” said Swan’s sister, Wanda Lott. “I haven’t seen this Charlie Swan in about 10 years. This is the brother that I remember.”

Wanda was at the Blind Rehabilitation Center visiting her brother on April 30, which happened to be the same day the BRC held an Open House exhibiting all of his art work.

Swan is very grateful that the VA has a facility such as the Blind Rehabilitation Center. Without it, he’s not sure what would have happened to him.

“I’ve still got a ways to go, learning new things here, but I have to say, this is one of the best kept secrets of the VA. And it’s more than the beautiful building, great staff and new technology. It’s about the fellowship I’ve enjoyed with my other Veterans. That means a lot to me. I would, without reservation, recommend this facility to any Veteran out there that is visually impaired. It’s been a life changer for me,” he said.