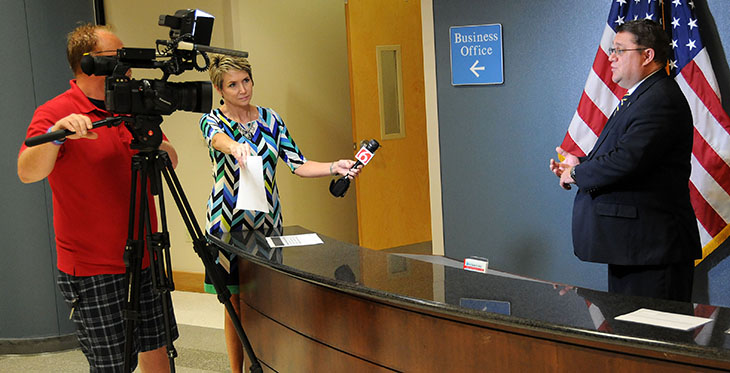 This week, VA facilities across the country are opening their doors to inform our Veterans, their families and the many other community stakeholders of what their local VA is doing on behalf of Veterans. Here are some of the highlights from the hospitals, regional benefits offices and cemeteries who engaged with local media and other stakeholders to discuss how they are serving Veterans, addressing challenges and improving services for the future.

Staff of the Overton Brooks VA medical Center in Shreveport, La., hosted a press conference for their local media and told reporters they are “always working to improve the Veteran experience.”

In Birmingham, Ala., Dr. Bill Harper, acting director of the Birmingham VA Medical Center hosted a tour of the new Birmingham clinic. The number of Alabama Veterans served by the facility continues to grow – currently it’s about 65,000 Veterans.

Cincinnati’s new VA Medical Center director, John Gennaro, held roundtable discussion with local reporters. One of the programs he and Cincinnati staff highlighted is the Tele-Intensive Care Unit. This ground-breaking tele-health initiative enables doctors and nurses stand by 24 hours a day to care for patients in VA hospitals as far away as Georgia and Wilkes-Barre, Pennsylvania.

“There’s a lot of great stories and successes and a lot of work and effort that goes into all those programs, and each one of them has a wealth of information for the community and other Veterans to know. And that’s our goal,” Gennaro said.

Technology is also helping the Pittsburgh VA Medical Center expand its ability to serve Veterans in more rural or remote areas. As one doctor said, “I can practically move virtually from here in Pittsburgh to West Virginia to Philadelphia to Florida, all in the same day.”

Dayton National Cemetery, located in Montgomery County, Ohio, was established as a permanent burial site for Veterans in 1867. It is now offering full military funerals for Veterans, including tributes from an all-volunteer honor guard. Nick Hetzer, a cemetery technician and a member of the U.S. Navy Reserve told the Dayton Daily News the cemetery is staffed by Veterans. “At the end of the day, when you stand and look at all these headstones, you have a real appreciation for what you do,” Hetzer said.

The Montgomery, Ala., Regional Benefits office discussed the progress they are making in processing Veterans’ disability claims – both old and new. “Our peak inventory, back in June of 2013, was over 17,000 active claims for compensation,” said Cory Hawthorne, director of the Montgomery office. “We had over 12,000 of those claims that were in a backlog status,” meaning they were more than 125 days old.

Read more about what’s going on at other VA facilities at:

Pictured in the photo at the top of this article, Muskogee VAMC public affairs officer Nita McClellan holds a microphone for a CBS affiliate cameraman while he interviews interim director Richard Crockett.