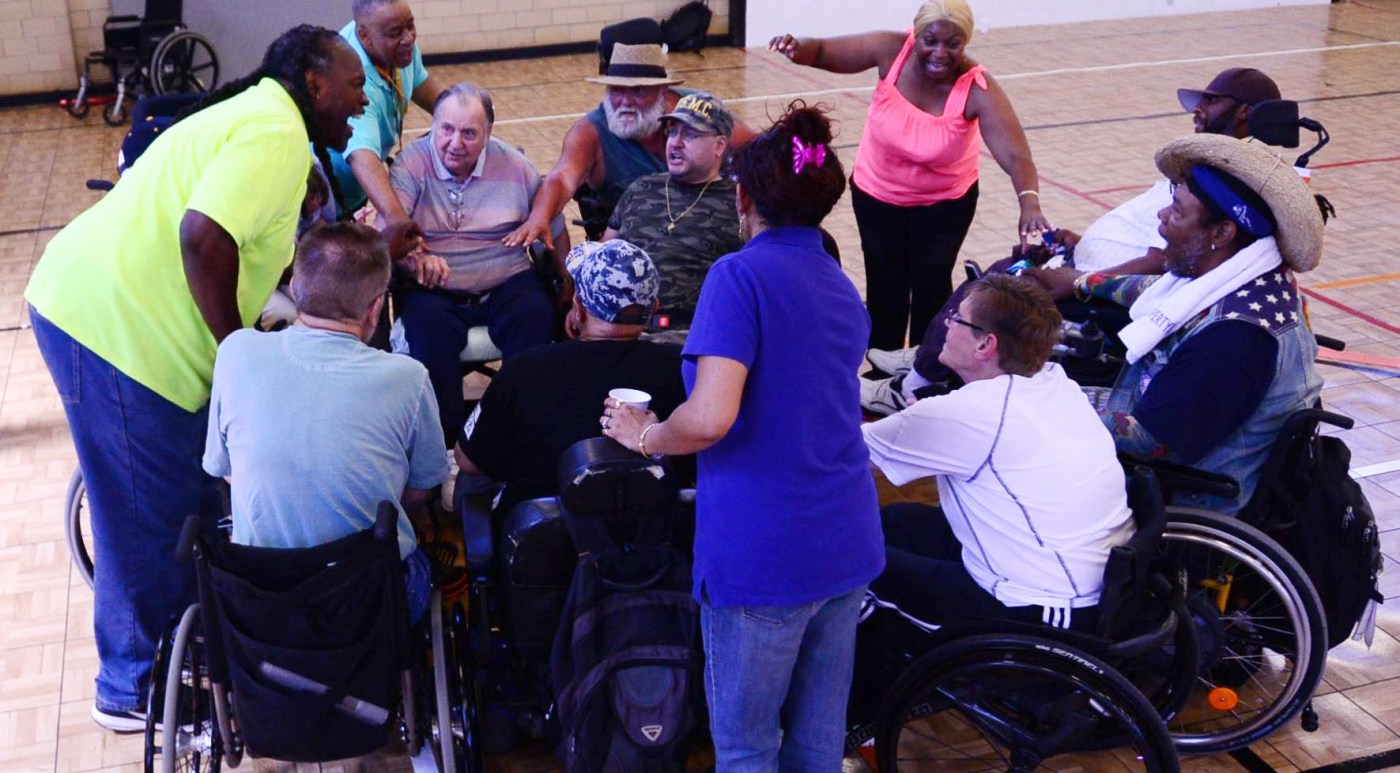 They served on the teams that protect our country – Army, Navy, Air Force, Marine Corps and Coast Guard and on Aug. 5, 20 disabled Veterans from New York and New Jersey formed two new teams to do battle on an indoor softball field.

The annual Wheelchair Softball Clinic, played at the Montrose, N.Y., campus of the VA Hudson Valley Health Care system, combined  some of its disabled Veterans with those from the James J. Peters VA Medical Center, Bronx, N.Y., and the East Orange campus of the VA New Jersey Health Care System as a part of VA Hudson Valley’s Adaptive Sports program .

The #VASummerOfService event put Veterans into two teams – American and National – and paired them with volunteers and VA employees to see which club could best the other. And while it’s all for fun, the event is meant to help the disabled Veterans in a number of ways.

“It’s an incredible program for our Veterans who wish to get connected with the athletic side of themselves,” said Pedro Gonzalez, recreational therapist for VA Hudson Valley. “It provides them an opportunity to work through challenges, taking skills they may have used in the past, modifying and using them in a new way.”

Gonzalez umpired the game calling balls and strikes, while a member of Disabled American Veterans Post 137 handled the action at first base and fellow DAV members served a massive lunch to everyone. Hudson Valley, Bronx and New Jersey employees and volunteers helped in the field, shouting encouragement and ensuring Veterans stayed safe.

“I’m so glad to be here and do what I can. It’s really special,” said Turner, who pitched for the American team, and signed as many autographs as there were people in the gym.

“I’ve pitched a lot of softball in 42 years,” said Army Veteran and long-time volunteer and former VA employee Paul Natalie who serves up the pitches and coaches the National team. “I never enjoyed myself more than I do when I volunteer for these kinds of events.”

Despite the extreme humidity of the gym (where the game takes place), the action is also heated. A 92-year-old Veteran’s clank of an aluminum bat landing a single drew cheers and excitement from everyone in the room. The runs continued to come fast and furious. The game was not without some controversy, with questionable calls at the plate. One player was knocked out of her wheelchair while making a close play at second – she was fine and played on.

When the game ended, the American team stood as victors, but that didn’t matter. In the end, it was the participation, camaraderie and time on the field that mattered. Handshakes and high fives, then a bus ride home filled with more stories until they meet again next year in the Hudson Valley for another chance to serve one another and play ball.