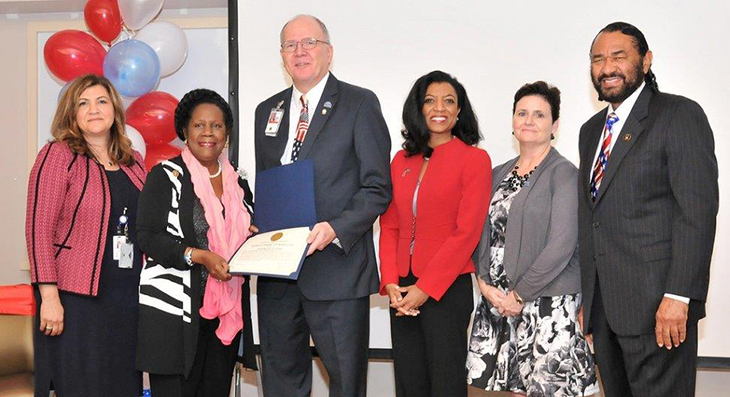 This most recent 2015 Women Veterans Campaign event featured an extensive variety of tables and booths detailing the many services offered to women Veterans in Houston, and honored the stories of their service.

The keynote address delivered by director of VA’s Center for Women Veterans Elisa Basnight recognized the personal journeys of multiple generations of military service by the women Veterans in the audience, and focused on the theme of collaboration in serving them.

“VA’s commitment to women Veterans is second-to-none,” said Basnight. “In the coming days, months and next several years, our collective efforts will carry even more significance as we draw down our [military] force and more Veterans come to depend on collaborative efforts among all of us—federal, state and local partners—to ensure their economic security and to maximize their personal potential after the uniform.”

As part of the event, a resource fair gave attendees not only the valuable opportunity to become better informed, but also served as a venue for making connections.

The gathering was “a great place for women Veterans to learn about services and benefits and network with each other,” said Dr. Rola El-Serag, medical director of the Women’s Health Program at the Houston VAMC. “It was great to see the interaction and camaraderie between the Veterans. Women who just got out of the military were having a great time talking with women Veterans who served in World War II, Korea and Vietnam. What an amazing group of women.”

During an awards ceremony, a standing-room-only crowd gathered to recognize 18 women nominated for their resilience and work on behalf of women Veterans. Arlene Rodriguez Slimmer — an 81-year-old Army Korean War-era Veteran who continues to volunteer as a nurse in the Houston community — received the top Resiliency Award. The Houston VAMC’s Dr. Deleene Menefee and Demetrice Baldwin, a loan specialist with the Houston VA Regional Office, also received awards for their work in serving Veterans.

“The Houston VA team and community did an outstanding job in connecting with the local women Veterans to exhibit programs and services available to women Veterans,” added Basnight. “I was truly infused with high-octane inspiration from such a tremendous group of trailblazers.”

Check out the Houston VAMC’s Flickr album containing more photos of the event.