Home / Honoring Vets / Save our stories! Capturing the history, tales of America’s Veterans

Save our stories! Capturing the history, tales of America’s Veterans 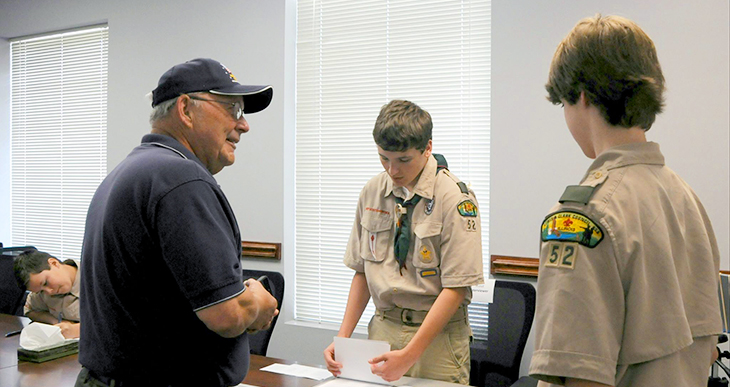 Lt. Olin “Short Round” Hardy was beloved by the men he served with, not just because he was a great forward observer, but because he managed to bridge the infinite divide between Artillery, his trade, and the Infantry of Company L. His misadventures bringing scavenged creature comforts to the foxholes at the front, or in bringing extra fire to bear on enemy positions, made him legendary, even 60 years after the Korean War.

Today, his remaining brothers in arms toast his memory and the deeds that drove them to advocate that he earn the Combat Infantry Badge, an honor normally exclusive only to Infantrymen. The men telling Hardy’s stories are in their 80s, and the size of the once-large group has dwindled to only a handful. The memories – the stories – pass away with the infirmities of time and age, and eventually, death.

For Veterans of “The Forgotten War” in particular, the opportunity to capture their stories for forever is quickly passing by. But it doesn’t have to be that way.

In the same war, Sgt. Jack Shannon jumped out of airplanes, then waged combat at close quarters with both North Koreans and Chinese regulars. I only know this by inference, though, because my father-in-law never talked to me about any of that, though I could see those things haunted him.

Instead, I heard about him helping loosen the airplane cargo pallet carrying a Jeep over its drop zone – only to have the pallet break loose and take the Jeep – and Jack – with it. A few heart-stopping “ass-over-elbows” moments later, he managed to get ahold of the Jeep mid-air, climb in and hold tight for a hard – but survivable – landing.

Or there’s the story of a fellow soldier who was afraid that a North Korean might creep into camp at night to slit his throat as he slept, so he set booby traps all around his quarters – and almost blew himself up, along with everyone in a 10-foot radius.

Then there’s my own Dad, Airman Third Class George Bishop, who enlisted for the noblest of reasons: to get away from home as young as legally possible. He was also in Korea, and served as an electrical technician on some of the world’s first computers.

In his free time, he dealt blackjack in the Officer’s Club, and infamously came up with a number of schemes for getting ahead in the world the fast way – which invariably is the wrong way.  This led him to get busted down in rank at least twice. He certainly also had adventures and close calls, though of a graft-and-greed nature, far from the front – experiences that reflect a different man than the law-abiding one I knew and loved as my father – a man still in his youth and still learning, albeit the hard way.

Besides Korea, the one thing in common amongst these three heroes – and to too many others – is that no one captured their stories firsthand. While I’ve told some of them here, what I’ve recounted is hearsay – subject to my own frame of experience and to my shabby memory. Sadly, then, what’s retold in sparse detail is pretty much the extent of which I know about any of these situations – and thus, what anyone knows about them.

These stories, then, are a gift; I am proud that the ones I have, as few and limited in detail as they are, were entrusted to me. I’m trying to save them for my children and for their children. But I didn’t get much detail, and I didn’t get many stories.  And now it’s too late to get any more. When they were alive – and elderly – I thought it might be unseemly to ask to hear them, and especially, to record them. That’s my greatest regret now.

My 16-year-old son has seen this through me, and he gets it. That’s why, for his Eagle Scout service project, he chose to lead a group of young men to capture on video the histories of other Veterans – for their families, for historians and for the public. He teamed with his beneficiary, the Missouri Veterans History Project, to gather and submit the stories as part of the Library of Congress’s Veterans History Project. He wasn’t able to get his grandfathers’ stories, but he did help get a handful of others’ grandfathers’ stories.

Each of us can do so, too, whether as a volunteer for one of these programs, or less formally with our immediate circle of family members, friends or neighbors. From my own experience, I’d pass along the following tips, and strongly encourage everyone who knows a Veteran to:

Jeff Bishop is associate director for marketing and communication with the VHA Employee Education System.  As an active duty Air Force Veteran, he deployed in support of Operations Southern Watch, Enduring Freedom and Unified Assistance, and continues to serve his nation and his state as a member of the Missouri Air National Guard.