Heroes are the highlight at 70th V-J Day Commemoration 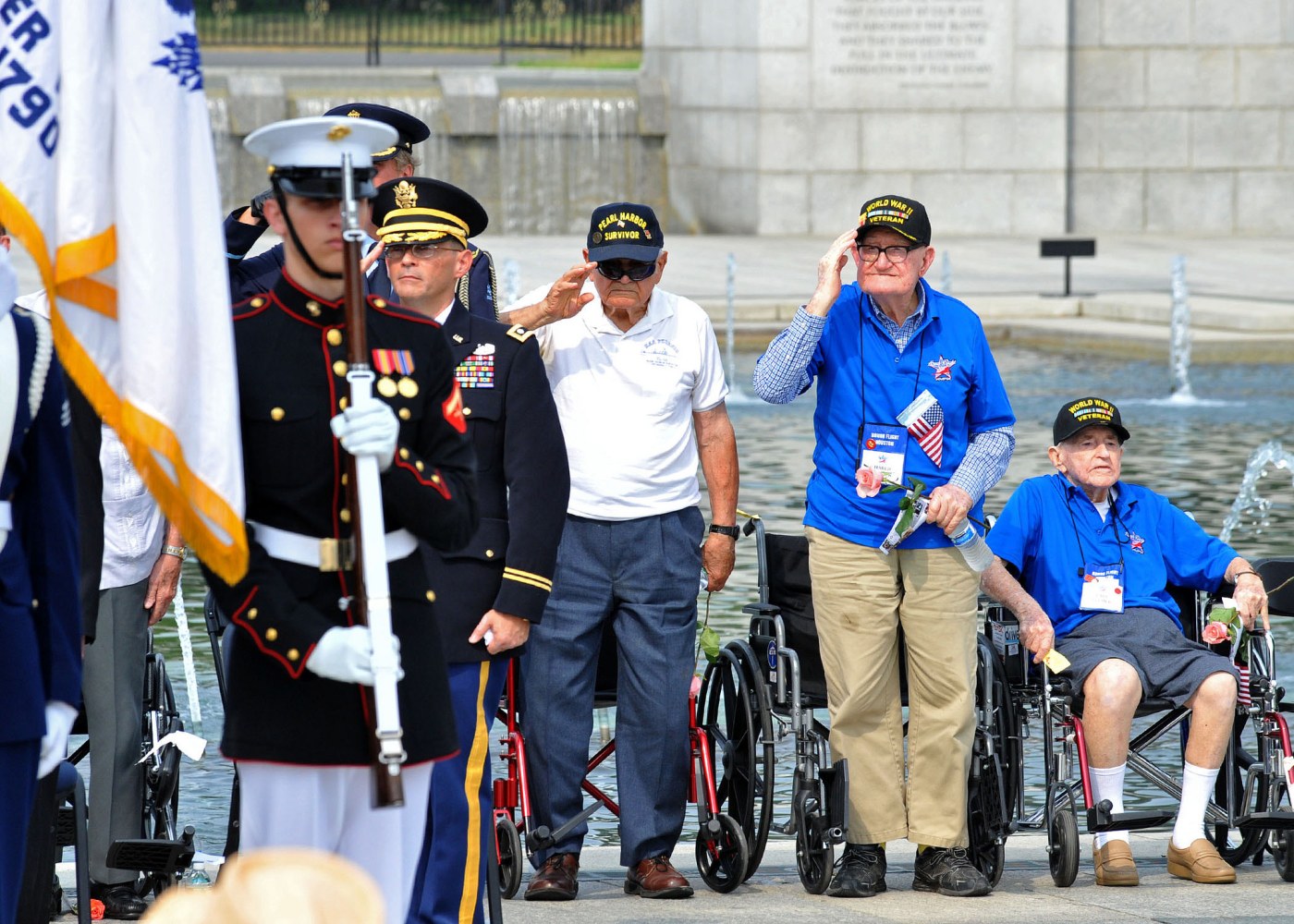 Many of the Veterans at the event came on Honor Flights from Texas and Ohio.

Former U.S. Sen. Bob Dole, a wounded WWII Veteran who led the drive for more than $170 million to build the memorial, was a speaker at the event.

Escorted by men and women in World War II vintage military uniforms, about two dozen of the WWII Veterans placed wreaths at the memorial’s star-filled “Freedom Wall” in memory of the more than 400,000 Americans and 60 million killed worldwide in the deadliest conflict in human history. Each star on the wall represents 1,000 Americans killed in the war.

Here is a little about 13 of the World War II Veterans who were honored at the commemoration and placed wreaths at the Memorials Freedom Wall. Click on their names for more information.

Andrew Abugelis, 92, received numerous medals for service and bravery in the Navy. He participated in the attacks on Marcus, Wake and Gilbert Islands, as well as the Marshall Islands, Palau, Truk, Woleai, Hollandia and New Guinea.

John R.L. “Jack” Cassidy turned 100 on June 8. The native of Bridgeport, Conn., served in the Navy 21 years, participating in Operation Torch, the Marianas campaign, the Philippines campaign, and the Okinawa campaign, where his took multiple hits from kamikazes).

Andrew Chando Sr., 91, was one of seven brothers who served in the Army or Navy, five of whom served during World War II in both theaters.

Edward Christiansen, 88, of Washington, D.C., and suburban Maryland, served aboard the USS Guilford in the Naval Amphibious Warfare Forces in the Pacific.

LT (jg) Geraldine Lohman Corn joined the Navy as a supervising nurse at the Mare Island Naval Hospital in 1943 to care for sailors and Marines wounded in battles in the Pacific theater.

William D. Curley, 93, of Gilbert, Minn., served in the Army’s 31st Infantry “Dixie” Division in the Pacific for three years. His brother, Tommy, was killed in action with the 36th Infantry Division on the French-German border in 1944.

Frank Ettinger, 91, joined the U.S. Army Air Corps after high school in 1942 and served in the 51st Fighter Control Squadron of the 10th Air Force in the Assam Valley of India and then in Burma, where he and his small detachment celebrated V-J Day in 1945.

Edwin M. Savacool Sr., 91, a native of Phillipsburg, N.J., was in the U.S. Army 2nd Armor Division when he landed on D-Day +6 and helped in the capture of a number of towns through France, Belgium, the Netherlands and Germany. He received a Purple Heart for injuries during the battle of the Siegfried Line.

LTC Thomas “Bob” Vaucher is 96 and a native of Mission, Texas. He flew his first combat patrol mission from Westover, Mass., in search of German ships and submarines on the east coast. He would fly nearly 40 different aircraft types and a total of 117 missions in eight countries during the war. He received numerous medals including two Distinguished Flying Crosses.

Sylvester T. Winter, 94, was born in Baltimore and settled there after the war. An Army technician in the 77th Reconnaissance Troop, he served in the liberation of Guam, Leyte Island, Okinawa and Cebu, Philippines, where 5,543 Japanese surrendered.

Ernest J. Yamartino Sr., 90, was a Marine assigned to the 3rd Amphibious Corp Artillery and participated in Okinawa during the Army/Navy joint invasion of Japanese controlled island. He was promoted from private to corporal to Sergeant during a six-week period of the campaign. He is a native of Massachusetts and still lives there.

Frank B. Yanick, 93, is a native of Uniontown, Penn., who now lives in Falls Church, Va. He served six years in the Navy from 1940-46, five of them on the USS Phoenix, known as the Galloping Ghost of the Pacific. Yanick operated the ship’s 5-inch anti-aircraft battery in over 25 different engagements, including Pearl Harbor, Guadalcanal, the Leyte Gulf and the battle of the Surigao Staits.