Home / Health / Helping prevent suicide – anyone can get involved

Helping prevent suicide – anyone can get involved 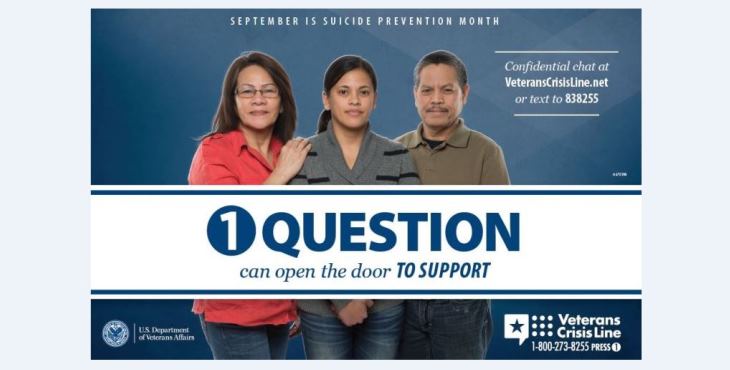 Veterans are at higher risk for suicide compared to the general population. Recent research suggests that Veterans who are receiving health care through VA are less likely to die by suicide than Veterans who do not take advantage of those services. Reaching out to those who struggle with suicidal ideation and helping them get treatment is one way that anyone can get involved in suicide prevention.

There is no universal “profile” of a person at increased risk of suicide. While some of the warning signs are obvious, others are not. But if you suspect a person is considering suicide perhaps the most important thing you can do is to ask the question: “Are you thinking of killing yourself?”

Understanding the realities behind the myths about suicide is an important step in breaking the stigma attached to talking about suicide. These are just some of the myths:

MYTH: Asking about suicide will plant the idea in a person’s head.

REALITY: Asking about suicide does not create suicidal thoughts. The act of asking the question actually gives that person permission to talk about their thoughts and feelings.

MYTH: The person really wouldn’t commit suicide because … he just made plans for a vacation, or she has young children at home, or he promised not to, etc.

REALITY: Most suicidal thoughts are associated with the presence of underlying treatable disorders, and the intent to die can override any rational thinking. A person experiencing suicidal ideation or intent must be taken seriously and referred to a clinical provider who can further evaluate their condition and provide treatment as appropriate.

The acute risk for suicide is often time-limited. If you can help the person survive the immediate crisis, further steps can later be taken to help them overcome their suicidal intent. Ask the question. It opens the dialogue to help that person get the treatment they need.

If you or someone you know is in crisis reach out and call 1-800-273-8255 (Veterans and Servicemembers press 1). You can also chat online at VeteransCrisisLine.net, or send a text message to 838255. Confidential support from caring VA responders is available 24 hours a day, 7 days a week, 365 days a year.

Kenneth R. Conner, PsyD, MPH, directs the VA VISIN 2 Center of Excellence for Suicide Prevention. He also co-directs the Center for the Study and Prevention of Suicide at the University of Rochester Medical Center, where he is a professor in psychiatry.