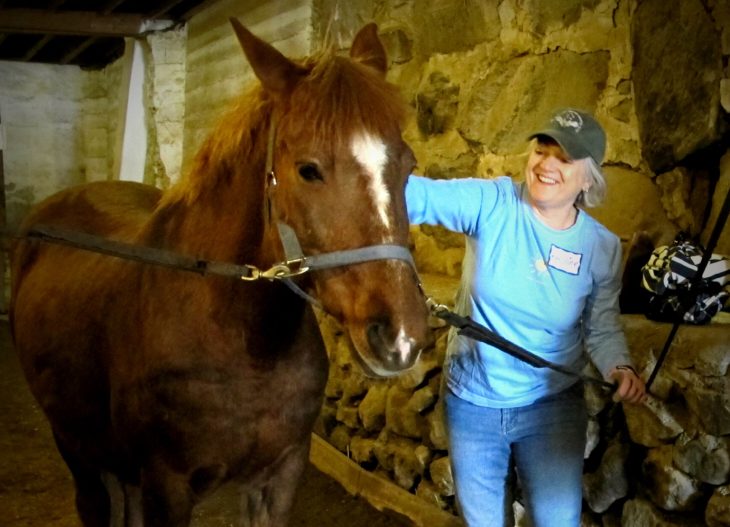 How would you like to spend a couple of restful, worry-free days on a scenic New Hampshire farm where you can pet a lamb or a friendly goat, ride a horse, gather eggs from the hen house, or just go for a walk in the woods?

“When I first got there I was sort of depressed and withdrawn,” said 58-year-old Karen Romanelli, one of nearly a dozen women Veterans who spent a weekend at Touchstone Farm. “I went off by myself and just started walking around the farm, looking at everything, all the horses, the chickens and the little animals they had. By the time I got back to the log cabin I was smiling. I’m still smiling.”

All the women who attended the retreat are patients at the Manchester VA.

Shannan Brown, a peer support specialist at Manchester, organized the weekend retreat because she thought the women – many of them under treatment for post-traumatic stress – would benefit from a peaceful setting and a little comradery.

“It was just us women,” said Brown, herself an Air Force Veteran. “They have this massive log cabin where we stayed. We’d meet every evening in the Big Room to talk about the day’s events. One night it was a little chilly so we had a fire going in the fireplace. We sat around sharing stories, telling jokes, laughing. Everybody was so happy, and seeing them happy made me happy.”

Sixty-three-year-old Boo Martin (her real name is Isabella) is the owner of Touchstone Farms. She holds retreats there just about every weekend.

“We had 11 women Veterans here, and they spent endless time with the horses and the other farm animals,” she said. “We have goats, donkeys, rabbits, miniature horses, chickens —a whole barnyard full of animals. I think my favorite part of the whole weekend was seeing Lindsey riding that big horse. She just threw her head back and was laughing and laughing. Here was a young woman who’d experienced some serious trauma, and now she’s on that big horse, laughing. Horses are powerful medicine.”

Marine Corps Veteran Lindsey Bernard, 31, agreed. The big horse she was riding is called Gruffy, and apparently he was just the medicine Bernard needed.

“He’s the new man in my life,” she laughed. “He’s a big guy…he looks like one of the Budweiser Clydesdales. I call him my Gentle Giant.”

Bernard said riding the big horse proved to be an unexpectedly emotional event for her.

“The whole experience… I don’t even have words for it,” she said. “I can only describe it as a re-awakening. I felt a lot of my walls coming down, melting away. I think a lot of the women experienced that when they got up on a horse. They just started glowing.”

Fifty-two-year-old Army Veteran Jean Labbe opted not to go riding. “I just had knee surgery,” she explained, “so I didn’t go on the horses because I didn’t want to hurt myself. But it was so nice being out in the country. They have a donkey and a couple of ponies that pull the carriages. They have sheep and goats. But my favorite was the donkey. His name is Dunkin. You wouldn’t think he was smart, but he was. He listened to me. You would think the ponies would be the smart ones. But it was the donkey.”

Gerry Duncan, one of the many volunteers at Touchstone, described the farm as a safe place where guests can feel supported.

“Here at Touchstone Farm a woman Vet gets to see herself as a person, not a patient,” she said. “She has a chance to just be herself, to simply ‘do life’ for a couple of days without having to worry about anything else.”

The seasoned volunteer said the farm is such a restful place because life there is unstructured.

“If you just want to sit on the front porch in a rocker and rock all day, just do that,” she said. “You don’t have to think about anything. You unconnect from the outside world and re-connect with what’s important. You’re out here with people who are friendly to you, who listen to you. We want you to feel safe and taken care of.”

“The world can be a harsh place. Being here gives you an opportunity to look at life a little differently, to dream a little.”

Duncan said the fun and good times began as soon as the women Vets arrived on Friday evening.

“We did facials on Friday night,” she said. “Everybody got a facial, and it was like a party, a bunch of women just laughing, talking and having a good time. Some of them said this was the first time they’d ever felt pampered.”

She added: “When you go away to a farm, all the stress of your daily life fades away.”

A Chicken in Every Pot

Air Force Veteran Pauline Nadeau, 58, admitted that her stress level got a bit elevated at Touchstone on one occasion.

“I was in the barn where the horses are,” she said. “There was a big tub of water for the horses, and a chicken had fallen in there! She was under the water; her head was the only thing you could see sticking out!”

Luckily, a volunteer was on hand to quickly fish the struggling hen out of the water trough.

“They put her on the floor, but she was shivering,” Nadeau said. “So I picked her up and put her under my jacket. I kept her really close to me. I was petting her little head the whole time. She was so sweet. I just wanted to make sure she was going to get warm.”

Nadeau said she’s not sure why she reacted so strongly to a wet chicken.

“I don’t know why it meant so much to me to hold her in my arms,” she said. “I just felt like I had to save her. It gave me a soothing feeling to know that she was going to get better.”

To learn more about what Touchstone Farm has to offer, contact Boo Martin at bmartin@touchstone-farm.org