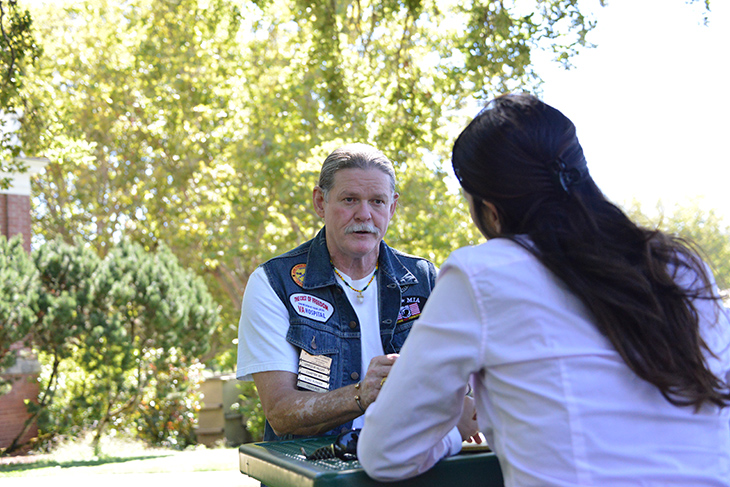 I met Mr. Jack Flowers during the 11th Celebration of Honor event in Lincoln City, Oregon, in 2014. The annual September event is hosted by the Chinook Winds Casino Resort and the Confederated Tribe of Siletz Indians to honor active duty personnel and Veterans. VA’s Office of Tribal Government Relations was asked to give a keynote address and provide an update related to regional and national VA activities.

After the event that year, Jack, who is a member of the Citizen Potawatomi Nation and the treasurer of the Vietnam Veterans chapter for the Umpqua Valley, contacted me in hopes I could assist him in his healthcare at the Roseburg VA Medical Center. He said he had been receiving his healthcare from the VA since January 2005 as a 50-percent service-connected disabled Veteran.

“During basic training they gave you immunizations with air guns, you just walked down an isle while they gave you shots and never wiped off your blood from anyone else’s,” recalled Jack, who believes he contracted Hepatitis C during his military service.  He served in the Army Transportation Corps from 1967-1970, which included a tour in Vietnam from 1968-1969. It was there, he said, that he had contact with body parts of injured personnel, calmly telling me “who knows if I had cuts on my hands when I touched those body parts.”

He said often people assume you were a drug user to have contracted Hepatitis C – the most common chronic blood-borne infection in the United States. But the risk of contracting Hepatitis C is much greater among Veterans  –  twice that of the general public. Currently, about 180,000 Veterans are diagnosed with Hepatitis C.

Jack found out that he had Hepatitis C in 1995. He said it was like receiving a “death sentence at the time.” He initially received interferon treatments and his wife told him, “it was like living with a stranger,”  and he was extremely sick from the treatments.

Within the last 12 months, the FDA approved two sets of Hepatitis C drug treatments. Jack had heard about the one called “Sovaldi,” but was having trouble obtaining the medication. I was able to connect Jack to the pharmacist  and infectious disease doctor at the Roseburg VAMC to assist him with the new treatment.

He started taking Sovaldi in January 2015 and within five weeks he was viral free. Unlike his previous treatments, the new drug had limited side effects; Jack only experienced some insomnia. He came by my office after a treatment one day with tears in his eyes and thanked me for making the connection. “You saved my life,” he said.

Jack is “ecstatic about VA’s care” he has received at the Roseburg VAMC. He encourages other Veterans facing similar circumstances to seek care with VA and specifically the newer Hepatitis C treatment options. While VA caregivers do everything they can to help the Veteran, Jack said that Veterans should have realistic expectations and take responsibility for their healthcare.“VA staff has been good to me,” he said.