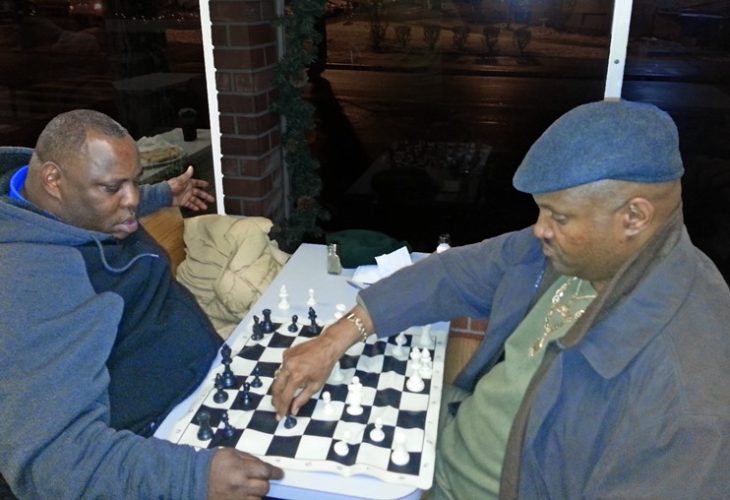 Buzz Aldrin, former fighter pilot and the second astronaut to walk on the moon, had this to say about trying to stay sober: “It’s been one of the greatest challenges that ever came along in my life; it was one of the more difficult things to do.”

Tony Russo understands and that is why he developed a simple, but effective, program at the Bedford VA to help Veterans struggling with alcoholism, drug abuse and mental health issues. It’s called “bridgers.”

“Bridgers” are people who actually accompany Veterans back out into the community once they leave rehab at the VA. “Guardian Angels” you might call them.

“We wanted to make sure our Veterans found healthy things to do, healthy people to hang around with,” Russo said. “At one time your life centered around the bar you hung out at and the people you drank with. We want you to hang out someplace else, with different people, and that’s what our bridgers help you do.

“Your bridger’s job is to help you get immersed in the life of your community. Your bridger might recommend a church to go to on Sunday morning, or where to go to do some volunteer work, or where to look for a job. Or he’ll say, ‘Hey, you want to hit a meeting somewhere?’”

All of the bridgers are Veterans. All are certified peer specialists and they are all in recovery themselves.

Russo, a former submariner, explained that a big part of recovery involves cutting out the bad influences in your life and replacing them with good ones.

“It’s a gradual process,” he said. “You start hanging out more at the gym instead of the bar, for example. You’re meeting new people. You’re creating a new network.”

Drebing said it was Tony Russo who introduced one of the program’s most important elements: the coffee social hour, or ‘Coffee’ for short.

“Tony established the first Coffee,” Drebing explained. “It’s an informal meeting of Vets at your local Dunkin Donuts or Starbucks or wherever. You just sit around with a bunch of other Veterans, drinking coffee and talking. It happens every week at the same time. It’s an entryway for getting connected to the life of your community. For example, at one Coffee we had a group of Veterans who decided to get together and help rebuild houses for disabled people. They just went over to a local non-profit and asked if they could help them rebuild houses. It was that simple.”

Army Veteran Chuck Delaney, another bridger at Bedford, said some Veterans respond quickly to the program while others take a little longer. “This one Veteran, Jesse, started donating his time at the Somerville homeless coalition,” Delaney explained. “He was helping them write grants. He used to be a business attorney. Now he’s writing grants full-time for a theater group.”

Then there was Jack, a Veteran who had spent most of his life working construction.

“Jack was struggling a bit after completing rehab,” Delaney said. “He had a couple relapses while he was living in transitional housing. But we finally got him into this training program so he could become a phlebotomist —that’s a person who draws your blood. So now he’s employed and living in his own place, just like Jesse. I’m very proud of both of them.”

“Reggie’s my bridger; he’s the guy,” said Mike, a 24-year-old Veteran of Operation Iraqi Freedom. “He took me bowling. He took me to a Veterans breakfast, which was pretty cool. He drove me to the University of Massachusetts so I could meet with an advisor and register for my two classes. He wrote a letter of recommendation that helped get me this job I have at the VA. I started here two weeks ago. Reggie’s also helping me work on my HUD-VASH application so I can have a place of my own. Right now I’m living in VA transitional housing.”

Mike said his bridger, Reggie, also brought him to his first Coffee and introduced him to everyone there.

“I go there every week now,” Mike said enthusiastically. “That’s really been the most helpful thing for me, those coffee socials. You sit there with other Veterans and go over your pyramid.”

“Your pyramid is all the different facets of your life,” Mike explained. “Housing, recreation, finances, health, transportation, your spiritual life. If any one of them breaks down, the whole pyramid starts to crumble. So you’re always working on your pyramid. The Coffees are a good place for that.”

“The Coffees are excellent because a lot of our Veterans just don’t socialize well,” said Redger (Reggie) Hennah, Mike’s bridger. “It’s not something they’re very good at. What they tend to be good at is going home, locking the door, and watching 13 hours of television by themselves. We don’t want them doing that.”

Hennah, a 53-year-old Army Veteran, said his favorite Coffee is the one held at Santoro’s Pizza in Lowell, Massachusetts. “The owner’s a nice guy,” he observed. “He’ll give us free pizza every now and then.”

The seasoned bridger said the weekly Coffee (along with the occasional slice of free pizza) is indispensable for helping Veterans like Mike reintegrate into their community following rehab. “Like I said, a lot of these guys are not good at meeting new people, they’re not good at forming or maintaining intimate relationships. But they can strongly relate to other Veterans. It’s like a separate subculture. They feel comfortable around one another.”

Hennah said Mike has come a long way in his recovery, but still has a long journey ahead of him.

“When I first met Mike he looked like he didn’t have much hope,” Hennah said. “He’s very young. He needed someone to confide in. But he felt comfortable with me after I told him my own story of recovery. So when I told him I understood his pain, he was able to accept it. He knew I’d experienced the same things he had.”

Editor’s note: The names of some former rehab patients quoted in this article have been changed, at their request, to protect their privacy.