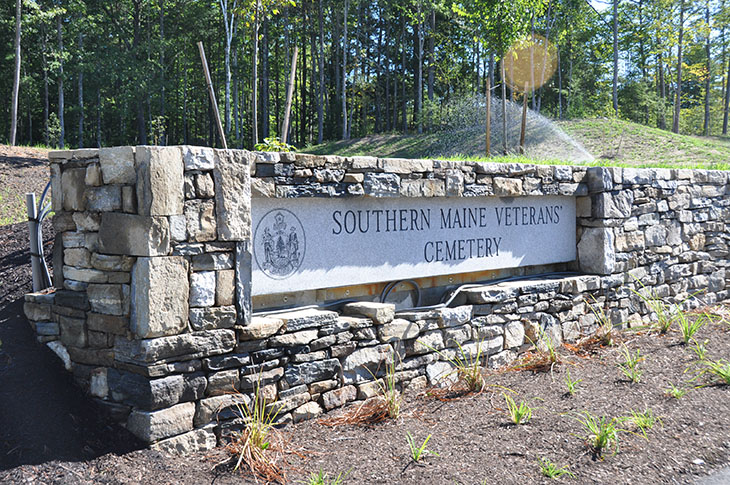 “FY 2015 was a robust year and I look forward to the challenges ahead as we care for our Veterans and their eligible family members,” said VCGP Director George Eisenbach.

As part of VA’s National Cemetery Administration (NCA), the grants program funds the establishment of Veterans’ cemeteries and then transfers them to the states and tribes to administer. VCGP’s mission also includes funding the expansion, improvement and maintenance of state and tribal cemeteries using a priority system to determine the greatest need.

This year, Eisenbach noted increased interest in tribal Veterans’ cemetery grants, attributing the growing awareness to word of mouth and VA’s own outreach efforts. “Every chance I get to talk to tribal councils, tribal governments, tribal members—you name it—I speak with them about the program. I find that a lot of folks really don’t know that the program is there for them,” he said.

The committal shelter at the Georgia Veterans Memorial Cemetery in Glenville.

In addition to establishing new cemeteries, VCGP provided grants for expansion projects at nine state facilities. Cemeteries eventually reach capacity, which can lead to Veterans in the cemetery service area losing access to their burial benefit. To prevent this, VA extends the service life of cemeteries by developing previously undeveloped land or by adding columbaria.

Eisenbach said that, in the future, he believes expansion projects will be the focal point of the program. “I think there will come a time when we won’t be establishing as many new cemeteries because most areas in the country will be covered,” he said. “Expansions are already our number one priority.”

From the program’s inception in 1978 through 2015, NCA has awarded more than $617 million through VCGS to establish, expand or improve 95 Veterans cemeteries in 47 states or territories. State and tribal Veterans cemeteries continue to be true partners with NCA, con­ducting more than 32,000 interments in FY 2014.

Chris Erbe is a public affairs specialist with the National Cemetery Administration. He is a 26-year Veteran of the U.S. Navy where he served as a musician and public affairs officer.