Marine turns to art therapy to stop the pain 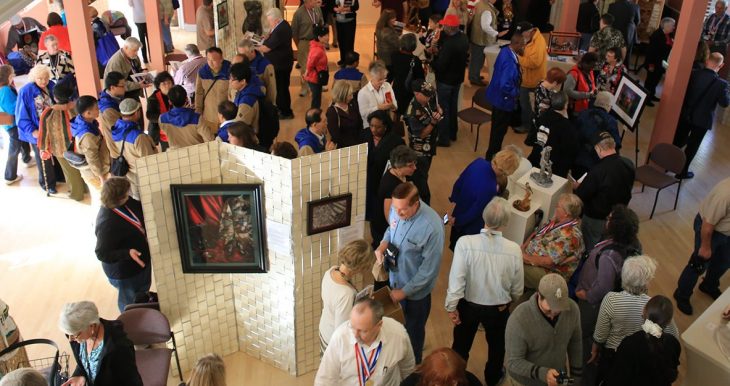 Gangbangers beat him, broke his neck and back, and left him for dead. But for Charles Marshall, who joined the Marines as a scrawny, 105-pound kid and drove a truck 60,000 miles around Vietnam, this was one more battle for him to fight.

It also was the beginning of a new man, who defied a doctor’s prognosis and walked again, got himself clean and gave him a faith in God that continues today. As an artist, he sculpts out of wood and creates macramé as a chance to share his own story of hope to others.

His macramé work, “A Smile for BB,” took Gold in this year’s national competition and will be on display this Sunday at the University of North Carolina-Chapel Hill.

“It was a physical injury that was a blessing, because it was the turning point in my life,” said the Martinsburg, West Virginia VA Veteran.

Although he came home from Vietnam without a scratch, some wounds run deeper than the surface. He would run everyday. He ran marathons. He ran for hours, late night into early in the morning.

The anger and post-traumatic stress drove away his family. He lost his job. Marshall soon found himself on the streets and addicted to drugs.

Even then, he tried doing the right thing, and testified in a grand jury against a brutal, drug-selling gang.

“I was trying to clean up the neighborhood,” he said. “They had killed 35 people. They murdered one guy in a wheelchair; shot him and didn’t even care. Somebody had to do something.”

Six of them jumped him and didn’t stop beating him until they thought he was dead.

Marshall demanded to see a chaplain.

“And she said, ‘You’re paralyzed.’ But she came to my bedside everyday and held my hand. She was my only visitor for nine months,” he said.

It wasn’t an easy road back. He was still without a home and now found himself addicted to pain medication.

“They took me to Mental Health. I opened my mouth to speak and cried for three hours.”

He’s been clean for 13 years. Now he’s reunited with his family. He’s been married seven years and published a book of his artwork and poems as a way to help others.

“My art and this book allows me to put in perspective all aspects of my life. Everything in my life had a purpose. When people see my art, I get to tell them my story, and let them know they can tap into that. It gives me an opportunity to give them what they need.”