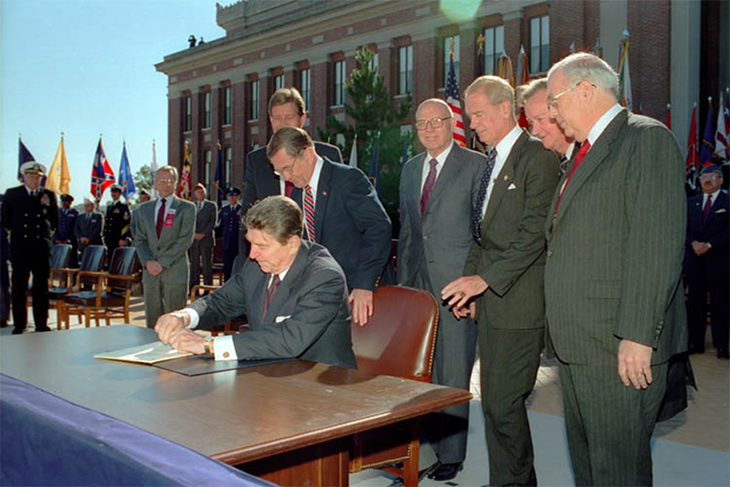 Twenty-seven years ago, on Oct. 25, 1988, President Ronald Reagan signed Public Law 100-527, known as the Department of Veterans Affairs Act, and elevated the Veterans Administration to the 15th Cabinet-level department in the federal government. The historic bill-signing took place at Ft. McNair in Washington, D.C., roughly a week before the 1998 presidential election. The law delayed full implementation of the Act until March 1989 when the new incoming president could appoint someone of his own choice to head the new department. For this reason, VA recognizes both dates—when the law was signed/enacted and when it became fully effective as significant to its history.

Roughly two weeks after the October 1988 bill-signing, a nationwide employee contest was held for the design of a new official seal to reflect VA’s new status. More than 100 designs were submitted. David E. Gregory, an illustrator at the Indianapolis VA Medical Center, drew the winning design. The Army’s Center for Heraldry assisted with final specifications on the seal, as well as the design for the new department’s flags.

Edward J. Derwinski was appointed as the last VA Administrator on March 1, 1989, by President George H.W. Bush and became the first Secretary of the new Department of Veterans Affairs fifteen days later when the Act took full effect. Derwinski was a World War II Veteran, banker and politician who served as VA Secretary until 1992. Secretary Derwinski made the decision to retain the “VA” moniker for the new department, instead of implementing the use of “DVA,” because it had been a familiar phrase within American culture for over 50 years.