Home / Top Stories / For Veterans, Every Face A Story

For Veterans, Every Face A Story 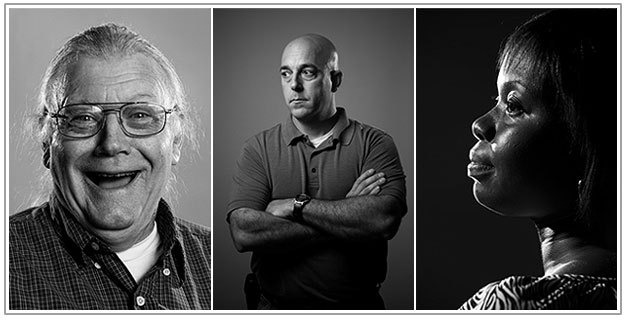 Ask a typical person in America to describe a Veteran, and you’ll likely hear a combination of those words. Most folks seem to have an image of Vets in their head that rarely escapes the outdated caricatures indelibly linked to pop culture icons like Rambo and the guy from Taxi Driver. The truth is, Veterans are a reflection of society more than most people realize; young and old, folks of all color, yankees and southerners, rich and poor, baseball fans and philanthropists, doctors, lawyers and jazz lovers. One photographer is helping to break down those old prejudices from a VA medical center in South Carolina.

Retired Air Force Staff Sergeant Stacy Pearsall is in a constant state of motion. A photographer by trade, Stacy served ten years with the military photojournalism team Combat Camera. She has stayed busy since medically retiring after serious injuries sustained over the course of her four deployments. She owns the Charleston Center for Photography and conducts photography workshops all over the country. She seems to never waste a minute.

Inspiration struck Stacy in an unusual place–while waiting for her appointment at the Ralph H. Johnson VA Medical Center in Charleston, South Carolina. To better spend her time in the waiting room, she gathered her camera and lighting equipment and began to photograph willing Vets. At first it was a personal project, but it transformed into a mission to change the misconceptions that everyday folks might have about Veterans.

“They think of a Vietnam-era Vet who has PTSD and jumps under a table when they hear a balloon pop,” Stacy said, describing what many civilians have come to believe about Veterans. To turn that notion on its head, Stacy ramped up her project, creating over 300 black and white portraits of Veterans spanning all generations, from World War II to Korea to Vietnam to Iraq and Afghanistan, and everything in between. Men and women. Young and old.

Now 88 of those portraits adorn the walls in a permanent exhibition at the Ralph H. Johnson VA Medical Center, and have been featured in national portrait exhibitions. They’re tangible reminders of those who have sacrificed, especially Vietnam Vets—some of whom were not so warmly received upon returning home, Stacy explained. “It’s a tribute to Veterans at large, not just the ones on the walls.”

Stacy has ambitious plans to take her project national and capture portraits in all fifty states. I wouldn’t doubt her drive or tenacity to complete that mission; I served alongside her in Iraq during the bloody spring of 2007, which she describes here.

In a way, Stacy is the personification of her ongoing project, a sharp rebuke of the stereotypical Veteran. Here is a young and female Vet who made art from war, only to use those talents to challenge conventional wisdom and pay tribute to those who served at the same time. Every face a story, told elegantly through light and shadow.

Retired Air Force Staff Sergeant Stacy Pearsall is one of two women to win the NPPA Military Photographer of the Year Award, and the only woman to receive it twice. Her career has spanned four combat deployments and 40 countries. She was medically retired after injuries sustained in Iraq. She owns the Charleston Center for Photography with her husband Andy, also a retired Air Force photojournalist.