Honoring Veterans at the Tomb of the Unknowns 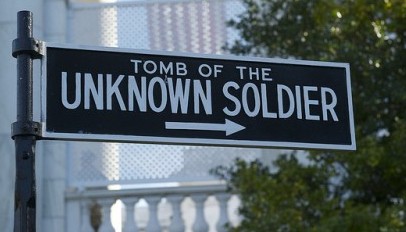 One the remarkable events occurring on Veterans Day is the National Observance at the Arlington National Cemetery in Virginia. The ceremony begins at 11 a.m. and honors Veterans and members of the U.S. Armed Forces with the wreath-laying at the Tomb of the Unknown Soldier, a parade of colors and a speaking program

The tomb lies above the remains of an unidentified American soldier from World War I, representing all of the fallen heroes who died during conflict. Since that time, unknowns from World War II, the Korean and Vietnam Wars were also interred in the plaza beside their comrade from World War I. In 1998, mitochondrial DNA testing identified U.S. Air Force 1st Lt. Michael Joseph Blassie as the Vietnam unknown. The crypt that held his remains for 14 years remains empty and is now inscribed in memory of MIA’s from the conflict “Honoring and Keeping Faith with America’s Missing Servicemen, 1958-1975.”

The Tomb of the Unknown Soldier memorial was dedicated on November 11, 1921, by President Warren G. Harding and commemorates all Veterans who died in service. The dedication was the first event in history attended by three presidents; Harding, Woodrow Wilson, and William Howard Taft. One other person honored to participate in the activities was Mariam “Mimi” Felt.

At the time, Mimi was 23 years old and worked in the water sanitation division of the U.S. Health Service in Washington, D.C. She shares her story through a letter addressed to her family on November 13, 1921. She recalls watching the parade transporting the unknown solider from the U.S. Capitol to his final resting place at Arlington.

“There were guards, of course, all up the line and then a special guard of honor around the catafalque. The flowers were simply magnificent, each state and then different organizations sent wreaths or flowers made up in some beautiful piece. President Harding’s wreath of red roses was on the bier and also a white ribbon was draped over it, which Mrs. Harding had made. It was most impressive, all told.”

She goes on to explain how the somber weather matched the occasion.

Friday, when the procession started, it was as though it were in the “gray dawn”, for the sun didn’t really break through until it was about all passed. And that went with that part of it, too, to me.

There were represented in the procession about every branch of service, and all the organizations, etc. President Harding and the cabinet and the Senate all walked, and we had a chance to see them all very clearly. Only I missed finding Taft until he was passed.

Read about Mimi’s full experience in her letter.

Andre Parker is a writer/intern with the Department of Veterans Affairs.