My Veterans Day breakfast at the White House 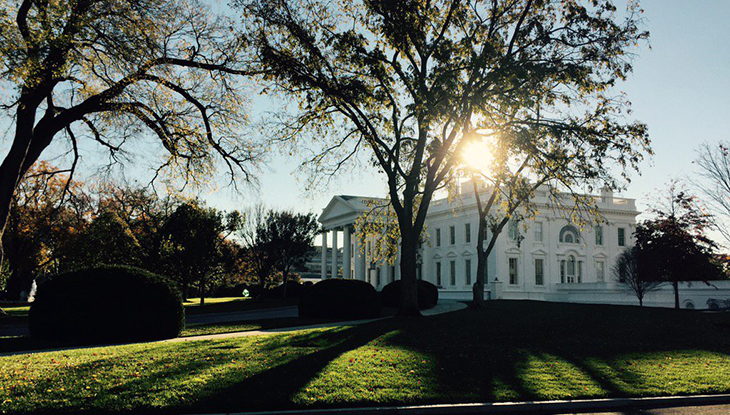 The White House hosted a breakfast for a group of Servicemembers and Veterans this morning in celebration of Veterans Day.

About 200 Veterans received an invitation to have breakfast in the East Wing of the White House today and I was fortunate enough to be one of them. It was quite an experience as they rolled out the red carpet for us. From the Marine playing a grand piano to fabulous breakfast dishes, everything was done to perfection.

Despite having a nice suit and fairly fresh haircut, I felt a little out of place in the elegant hallways of the White House with Secret Service personnel positioned at just about at every other door. I’m a low key kind of guy and this was not a low key kind of event. It was a big deal, or at least is for me.

Fortunately, the uneasiness went away once I was seated at my table and surrounded by Veterans. If you ever served, you know what I mean. Of course, you had your battle buddy,and close friends, but you could jump in the back of a hummer or pack yourself like a sardine in the back of a C130 with a 100 “Joes” you don’t know and still be comfortable. Truly comfortable, everyone belongs there, including you. That’s the way I felt this morning.

I struck up a conversation with two ladies at my table, both Veterans and both with Veterans Service Organizations. Our conversation was mostly work related. I introduced them to this blog — VAntage Point — and I expect we will see a guest blog or two from them about women Veterans and caring for Veterans families – the two areas that their respective VSO focuses its attention.

It became quickly apparent, that the event was more about socializing than eating breakfast as some people were finished and mingling before I even took my seat. And by the time I finished my coffee, the room was whirling with people introducing themselves or reacquainting themselves with an old friend they have not seen in years.

And since this is Washington, D.C., there was some work taking place, connections being made and numerous opportunities to talk with others who might be hard to get a hold of during official business hours. Or just a chance to have some small talk with someone you would never have a reason to talk to.

In my case, that was Chief Master Sergeant of the Air Force James Cody. I first spotted Chief Cody across the room (he’s pretty hard to miss with all those stripes) and snapped a quick pic with my cell phone and sent it to my wife, “Isn’t this Chief Cody?” You see, my wife is currently a Senior Master Sergeant who would give up a lot of things to be able to work for a man like Cody before she retires. As luck would have it, the Chief and his lovely wife ended up behind me in the receiving line to have our pictures taken with the President and Vice President. I jokingly mentioned my wife’s professional crush and he asked me about my service. Before I knew it, I was standing face-to-face with the President.

If anyone ever had that proverbial “deer in the headlights”, look it had to be me at that moment. But fortunately, that moment didn’t last that long, I was back out in the main hall surrounded by Veterans.

I am sure others were much more comfortable than I was. I’m pretty sure our boss, VA Secretary Bob McDonald was one of those folks. Bob was everywhere. Every time I turned around he was talking and shaking hands with someone. From a former POW, to a wheelchair-bound Vet from one of our more recent wars, he made his way through the crowds.

If there was a division in this group of Veterans, it was by branch. Marine Veterans waited for a chance to talk with the Marine Corps Command Sgt. Major, just like Airman looked for an opportunity to meet Chief Cody. There were also a lot of stars floating around the room. I saw several generals (4-stars) representing their branch of service.

I navigated around the room for a little while longer and snapped a few pictures with my phone before calling it a morning and heading back to my desk to write this blog. On my way out, I ran into Megan and her service dog Tank. My nosiness got the better of me, so I asked about Tank.

It turns out Megan is a Marine Corps Vet and was a part of the 2003 invasion force. She also told me that she had met with Secretary McDonald recently and had an opportunity to talk about how Tank has helped her since she returned to civilian life. She hopes that one day, VA will fund service dogs for those Veterans who could benefit by having one. She was very passionate about Tank being her prescription for a happy and healthier life.

I walked with Megan, Tank and her escort out of the White House and onto the White House grounds where they were catching a bus to the Wreath Laying at Arlington Cemetery. I plan to contact her later this week and talk more about Tank and service dogs – specifically about how other Veterans can benefit by having a service dog.

That was pretty much my Veterans Day breakfast at the White House – truly a once in a lifetime opportunity for this old and crusty NCO.

For those still serving, thank you for keeping us safe and defending freedom around the globe. Happy Veterans Day, brothers and sisters.