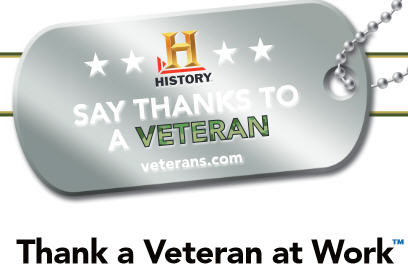 But how do you thank a Veteran? Unless you know that they served in the Global War on Terror, or an earlier conflict like Korea (1950–1953), Vietnam (1955–1975) or the first Gulf War (1990–1991), they can be invisible. Sure, a special event like Veterans Day makes it possible for a community to show its appreciation, but how many citizens actually turn up for those events. It would be far more immediate and meaningful to thank Veterans in your workplace.

Recently Alaska Airlines did exactly that.

A welcome home ceremony 50 years in the making.

No “thank you for serving” campaigns greeted soldiers, sailors and airmen on their returns from Indochina. Political conflicts in a divided country obscured the fact that these men and women were risking their lives daily in a difficult, dangerous assignment on behalf of America. Fortunately, the nation has awakened to the sacrifices made by that generation and has sought to make amends.

This fall, Alaska Air Group and the USO Northwest officially honored Vietnam-era Veterans during a celebration at the Seattle hangar. One of many 50th anniversary commemoration events held around the United States, the event honored some 40 Veterans, including some Alaska and Horizon airline employees. Entering the Seattle Hangar, they beheld what they had missed in the ’60s and ’70s: well-wishers thanking them for their service with cheers, welcome-home signs and even Patriot Guard motorcycle riders who held American flags. Said one Veteran, “We didn’t get much recognition at the time we came home, so this was cool.”

Of course, you don’t need to stage a special event to thank a Veteran. At VA, we’ve worked with the History Channel to reach out to communities nationwide with Thank a Veteran at Work. And don’t think of it as something you should only do around Veterans Day. Do so whenever the mood strikes you. Put up the Thank You Veteran poster, skim the “How To” guide, come up with your own program.

Thank a Veteran at Work reminds us to support those who have served, “…from The Greatest Generation to the latest generation.” Go ahead, offer your co-worker/Veteran a handshake or a thanks, they’ll appreciate it!

Another way to thank those Veterans? Make sure they’re taken care of when they need it most. Join VA today.