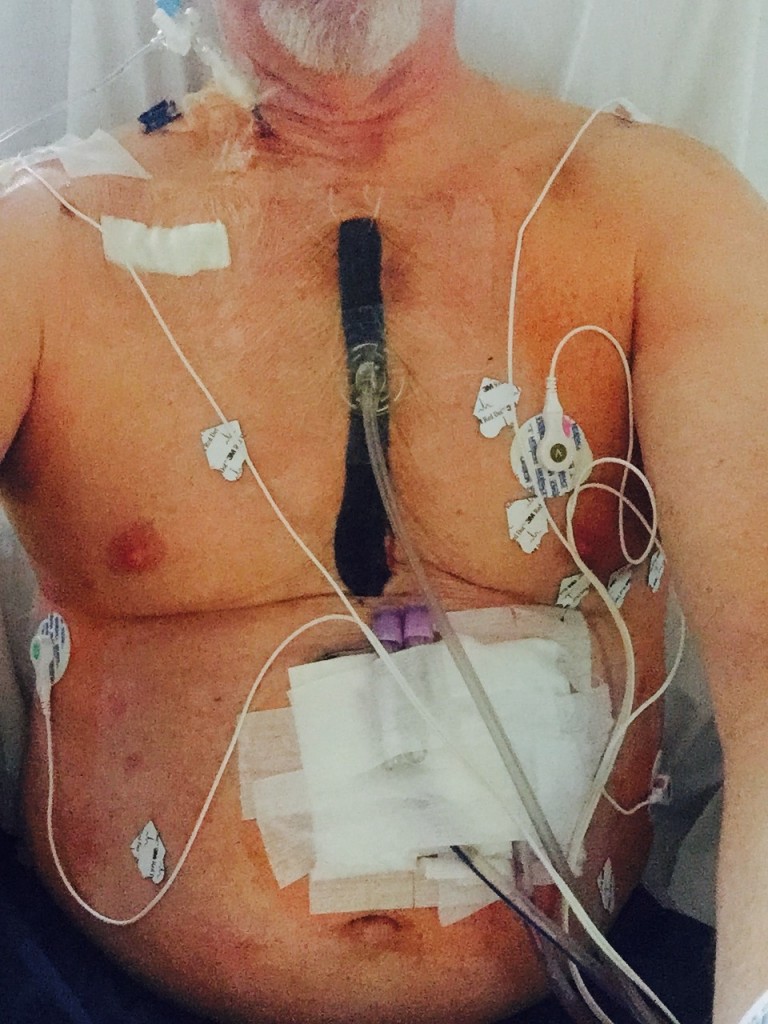 On March 27, 2015, I had open heart surgery for aortic valve replacement (AVR), as well as an ascending aortic aneurysm performed at the Durham Veterans Administration Medical Center (VAMC), which was awesome! I received an artificial valve made of carbon. Before the surgery, I was at risk of my heart getting enlarged and heart failure, all at the age of 54.

My journey started in late 2014, with a routine annual physical, performed by the Fayetteville VAMC. My primary care manager, Ms. Irene Strickland, was concerned about some ECG readings.  She ordered some non-VA care, which I received in December 2014 at Cape Fear Cardiology, in Fayetteville, N.C.  Dr. Brenda Ma-Depaolo saw me and gave me a thorough examination.  As Dr. DePaolo was a Navy Veteran, I felt very confident in her abilities. She was the first to tell me “You are going to have open heart surgery.”  My reply was “What was that?”  She said the valve was not functioning properly and allowing “severe regurgitation”; significant amounts of blood were flowing back into the heart after the heart pumped. This caused my heart to become dilated, and was causing my heart to work overtime. This became evident to me over the years while doing high-intensity cycling events. She suggested that I receive a cardiac catheterization. The Fayetteville VAMC agreed, and the cardiac catheterization was scheduled for January 2015.

On Christmas Eve day, I went to the Durham VAMC for the first time. It was exceptionally quiet, as the President had granted a federal holiday on Dec. 24. I confirmed with the VA that they still wanted me to show up, and I received a warm, “Of course we do.  It was already scheduled.”  I went to the cardiac area to meet Susan Roberts, LPN. She thoroughly explained what the cardiac catheterization was and the AVR procedure. Then, I talked to the surgeon performing the catheterization.  He was very professional and took time to alleviate any reservation I had. I asked him how many times he had performed this procedure and his reply was “over 1,000 times.” This level of experience really made me feel good about being at the VA.

On January 23, 2015, my cardiac catheterization was done to get more accurate readings about my heart, as well as to check for any blockages. When I was wheeled into the OR for the procedure, it was like a NASCAR pit crew was working there.  Everything was happening just like it was supposed to.  Commands and acknowledgements were called out and confirmed.  I was asked if I had ever had this done before.  I answered “No.  Have you ever done this before?”  The reply back to me was “Sir, we do about six of these a day.” That really boosted my confidence in the team.  I did not feel anything during the procedure.  While in the recovery area, someone I would affectionately refer to as “my PA”, Kista Hurley said everything went great.  She then said, literally, “I have good news and bad news.  The good news is that you don’t have any blockages or other issues.  The bad news is that you will have to get that valve replaced.” It was news I did not want to hear, but did not surprise me.

At my CT scan and pre-OP appointment at the Durham VAMC in early March 2015, the lab work and EKG were performed, without issue. I met with Kista Hurley, who was very calm and collected during the pre-op discussion.  She gave me some handouts as to what to expect, as well as what to do before, during and after the surgery. I spoke with my surgeon, Dr. Judson Williams. I liked Dr. Williams immediately because he was very relaxed, yet totally knowledgeable.  He told me that he had performed over 100 AVRs.  He clearly informed me of the associated risks, many of which could be dealt with if they materialized.  I felt very confident in his abilities.  He explained there would be a “team” of folks taking care of me, which really calmed my nerves.  Dr. Williams told me that the CT scan revealed the ascending aorta aneurysm, which was not previously identified.  Dr. Dan Moyse, my anesthesiologist, from Duke University Hospital, talked me through step by step as to what was going to happen that morning.

Dr. Judson Williams performed the AVR and Dr. Jeffery Gaca, from Duke University Hospital performed the aneurysm repair. This procedure was incredible.  There were not any complications. Dr. Williams and Dr. Gaca are talented, dedicated, and personable. If you need open heart surgery, see them! Dr. Williams told me that my post-surgery recovery was progressing remarkably. My replacement carbon valve is the very latest technology.

On April 3, 2015, I was discharged! I am blessed to have left the Durham VAMC with a new lease on life. I thank God for placing the doctors, the nurses, and the technology before me to enable a wonderful outcome. I thank my wonderful friends and family for their tremendous support.

As of mid-August, I am 20 weeks post-surgery, and I am recovering wonderfully. I’ve bicycled over 1,200 miles since the surgery and have two week long bicycle adventures on my schedule, each ride with 200 wounded, injured or ill veterans and active duty service members.

About the author:  Mike Thomas is a 28-year Veteran of the US Army who receives his health care at the Fayetteville VAMC. He currently serves as an administrative office with the United States Army Forces Command in Fort Bragg, N.C. In his spare time he is an avid cyclist.