The hundred-mile shepherd: One Veteran’s story 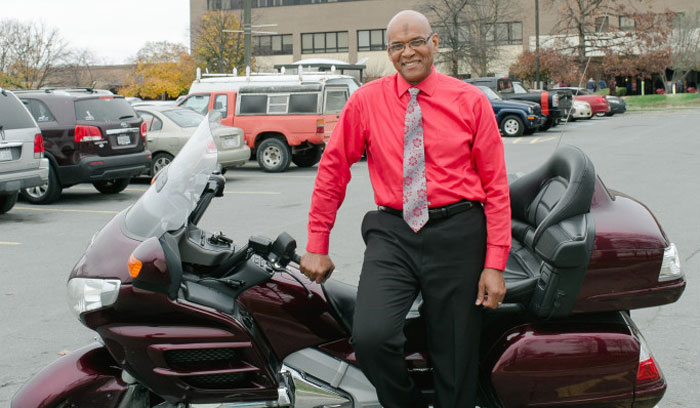 This article originally appeared online on the Inside Chick-fil-A blog. Chick-fil-A granted Vantage Point permission to re-post a portion here.

James Pierce is a shepherd. Each day he rises while the morning is still dark and cold, and he saddles up to tend to his flock. He has a little farther to ride than most, but somewhere between his home in White Plains, Maryland and the rolling hills of Martinsburg, West Virginia, the sun will rise behind him and light the rest of his 100-mile journey.

A few miles to his right, the dome of the Capitol building is lit up as he makes his way around the District of Columbia, but he’s not concerned with the hallowed halls of the powerful. He rides on. With the city behind him, Mr. Pierce rides past fields where the Civil War fallen still lie. Bull Run. Harper’s Ferry. He thinks of soldiers as he rides. He prays. He gives thanks.

James Pierce is a chaplain at the Martinsburg Veterans Affairs (VA) Medical Center. His horse is a 2006 Honda Goldwing motorcycle, and soldiers are his flock. As a kid growing up in San Diego, he was always afraid of the ocean. “I never felt comfortable in water I couldn’t stand in,”  Pierce admits with a chuckle.

Naturally, the guy who avoided water his whole life ended up as a Navy chaplain, but only after twelve years in the Air Force and a few years earning a Master of Divinity from Southern Methodist University. So why become a Navy chaplain? “When a vessel pulls away from the pier, you have a captive audience,” Pierce explains.

For the rest of James Pierce’s story, visit the Inside Chick-fil-A blog.

About the author: Daniel Fisher was born in Marietta, Georgia, and moved eight times as the son of an Army officer before attending Vanderbilt University on a music scholarship. Much of his career was spent in Washington, D.C., where he worked in development and management roles for consulting and public relations firms. Since 2012, Daniel and his wife Samantha have called Nashville home. When he’s not learning from his two young daughters, Daniel enjoys making music, exploring new cookbooks and keeping pests off his roses.