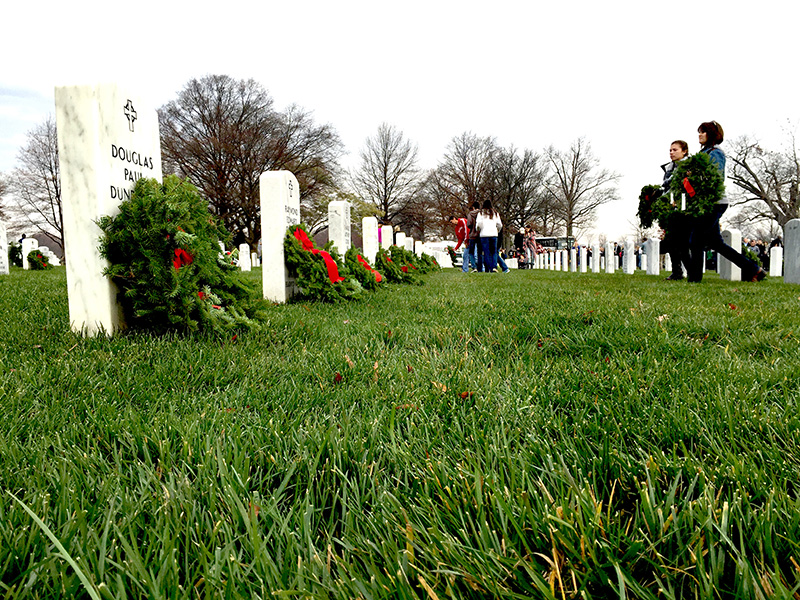 There are rare occasions in life that offer a deep sense of humility, gratitude or perspective. Even more rare are the occasions that offer all three, which is how I would describe the wreath-laying ceremony at Arlington National Cemetery on December 12.

Wreaths Across America is an organization with a mission to place a wreath on every head stone in our Veteran cemeteries, and this year I had the distinct honor of watching them in action, even laying some wreaths myself. (If you would like to know more about Wreaths Across America and its beginning click here.)

This was the first time I attended a wreath-laying event, and I felt fortunate to be at Arlington where more than 200,000 wreaths were placed on every head stone. December 12 is also my birthday, so the event had an additional level of significance for me, personally.

I shared the day with a couple thousand people who donated their Saturday morning to honor our nation’s fallen heroes, including country music singer Trace Adkins, who performed one of my favorite songs: “Arlington.”

Now, I’m not one for tears. As a former Marine and current National Guard officer, I like to think there are very few things that can spark that level of emotion. Trace Adkins managed to do it though and I suspect a lot of people in the crowd had the same reaction. In an almost surreal moment, just as Adkins finished his song the sun peaked from behind the clouds, lit up what was an overcast darkness and laid a blanket of warmth on the crowd.

As the opening ceremony was winding down and final directions were being given to the crowd, Wreaths Across America chairman Wayne Hanson said, “We all die twice. Once when the last breath leaves our body and again when our name is spoken for the last time. As you lay a wreath on the head stone of a Veteran, say their name, make sure they are not forgotten.”

Before the goose bumps had a chance to fade the calm was broken by the distinct sound of blades as Marine Corps helicopters – HMX-1 – flew overhead. The crowds began to move toward the dozen or so tractor-trailers that brought in the wreaths and the massive effort was underway.

The entire event was executed with precision. The end result was a beautiful cemetery – a hallowed ground – decorated with a sense of love and deep appreciation for those whose final resting place serves as a testament and reminder to all Americans that freedom and liberty are not free, that someone has to bear the cost.

More than 200,000 Veterans had their names spoken out loud at Arlington National Cemetery on Saturday. Countless more were remembered at VA national cemeteries and state cemeteries across the nation. As a result, more of our Veterans are still alive in the hearts of those who love them, and the hearts of those who took the time to say their name again. I think I speak for most who participated somewhere in America when I say, I feel privileged to have had the opportunity to speak these fallen Veterans’ names and lay a beautiful wreath at the base of their head stone.

“Rest easy Col. Robert Allen, you are not forgotten.”