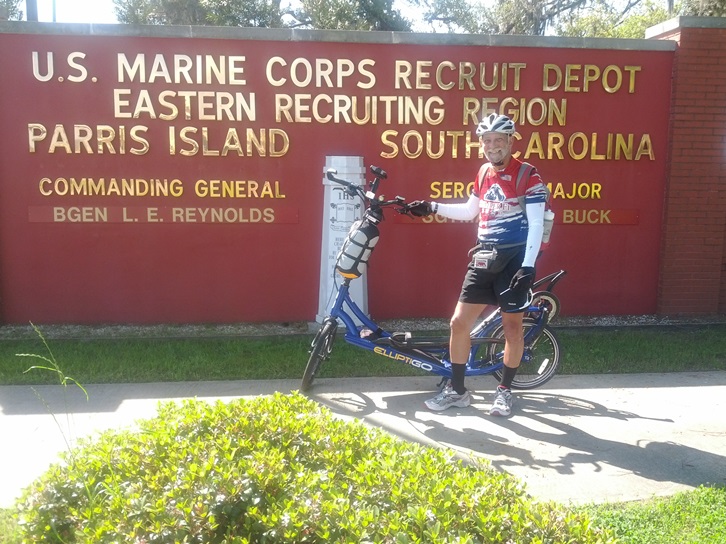 Marine Corps Veteran Rick Hermelin is no stranger to going the distance. In 2012, he made a 3,000-mile run from Parris Island, S.C., to the Marine Corps Recruit Depot in San Diego, Calif., in just 100 days.

But he wasn’t running in the traditional sense. He made the journey on his low-impact cross-training machine known as the ElliptiGO. At 71 years old, he was going strong, but he wanted to avoid the physical strain of running on foot.

Hermelin used that coast-to-coast challenge as a fundraising and awareness effort for the nonprofit charity, Injured Marine Semper Fi Fund, which supports injured and critically ill Service members and their families.

“When I completed these milestones, I started looking for a new goal and came up with the idea of running coast to coast,” said Hermelin, now a professional massage therapist. “It’s something I have thought about many times and have always wanted to do. That’s when a client suggested I try the ElliptiGO; and the rest is history.”

Hermelin was an aviation communications technician in the Marine Corps from 1959 to 1963, and credits his military experience as an asset to a 30-year electronics engineering career. “I always thank the service for what it did for me,” he said.

The training that the military provided Hermelin was further enhanced by his own natural self-discipline in many areas, to include physical fitness.

The Veteran has maintained a regular exercise habit for more than 45 years, and takes pride in his ability to positively influence others along the way.

“I like to challenge myself and I like to set goals,” the athlete said. “It gives me a lot of satisfaction …  that I’ve been able to inspire [others] not only through the events … [but] also just the people that I’ve known over the years. I’ve inspired them to take better care of themselves.”

Hermelin recommends to those contemplating an exercise program that they begin easily, building up gradually and staying consistent. “That way you’ll achieve whatever goals you set,” he said. “Do it for you and not for anybody else. You have to be your own main inspiration and motivation.”

It is evident by his achievements that he regularly takes this philosophy to heart.