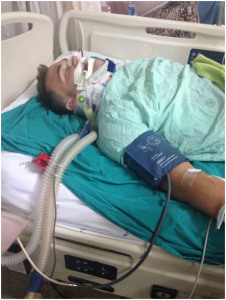 Ryan Begg in his hospital bed.

“I will never leave a fallen comrade.” It’s one of the basic pillars of the Warrior Ethos. This is true for Veterans as well.

Ryan Begg, a young Army Veteran, was one of an estimated 8,000 Veterans who currently find themselves in need of serious medical care in a foreign country. But Ryan found himself stranded 7,000 miles from home.

He had suffered severe injuries after falling from a highway overpass in a tragic motorbike accident while in Thailand this past August. His wife Danielle flew out to be with him and lived at the hospital under his bed.

His injuries were overwhelming:

When he ended up in a critical care unit, his family reached out to military service organizations in an attempt to get him transported to medical care in the U.S. Unfortunately, the active and reserve components of the military could not assist.

Jaastad coordinated with multiple organizations including the Veterans Health Administration (VHA), the Department of Defense, State Department, local medical providers, VISN 21, the Pacific Island Health Care System and the Tug McGraw Foundation to develop a plan to get this Veteran into VA care.

“Helping this Veteran back into the VA network has been one of the more satisfying things I have done” said Jaastad.

VHA OEM normally does not work on issues with individual Veterans but assists and coordinates in disasters and contingencies for VA Medical facilities. Due to Ryan’s medical situation and because he was in a foreign country, it took several weeks of coordination by Jaastad to develop a viable plan.

Ryan’s family did not have funds to pay for private transport to the U.S., and VA cannot by law pay for beneficiary travel outside of the country. In addition, Ryan’s medical fitness for travel remained a significant concern.

With the perseverance of many individuals, organizations, and with the support of VHA leadership, on Sept. 23 Ryan boarded a medical flight to Tripler Army Medical Center in Honolulu and within 24 hours was in surgery. After several weeks of surgical and medical care he was transferred to the Palo Alto VA Medical Center for rehabilitation.

Recovering slowly, he is now able to feed himself, is showing improvement in motor skills and speech and is able to get around in his wheelchair. A native of Washington state, Ryan served as a Special Forces Medic in Afghanistan.

“In learning about Ryan’s situation, I would have piloted a plane myself to get him back from Thailand to U.S. territory,” said Tim McGraw, Honorary Chairman of the Tug McGraw Foundation. “But what he needed was a Critical Care Team with expertise.  Through collaborative efforts led by the VHA Office of Emergency Management with the Care Coalition, the Tug McGraw Foundation, the State Department, and the Fisher House, that’s exactly what happened.”

“There are many other acutely injured Veterans out there that need a champion in order to receive the care they have earned” Derrick Jaastad says. “We work with our Veteran Service Organizations and federal partners to identify those Veterans who are in medical crises and get definitive medical care as we did with Ryan.”

The VHA Office of Emergency Management team has staff across the country dedicated to serving Veterans in this very unique way.

“Our emergency managers are there, no matter what goes wrong” stated VHA OEM Director Dr. Daniel Bochicchio. “We are always available and always ready for any situation to help ensure Veterans get the care they need, even if they are 7,000 miles from home.”

About the Author: Barbra Meadows is the Operations Branch Chief for the VHA Office of Emergency Management