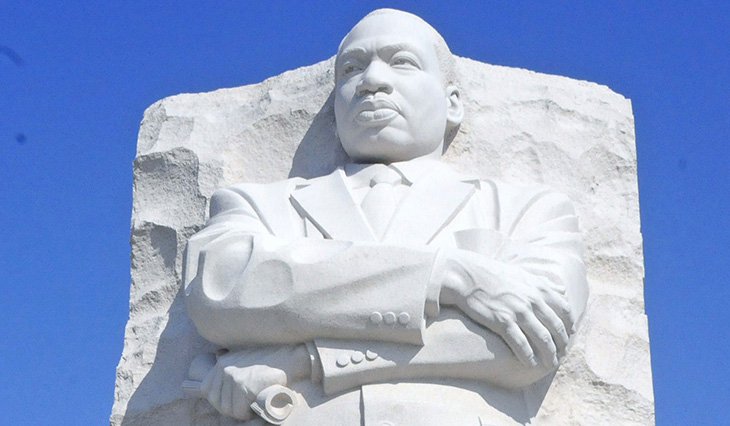 Each January across the nation, we pause to reflect on the life and legacy of Dr. Martin Luther King, Jr., a great humanitarian and visionary leader whose courage was instrumental in bringing freedom and liberty to all Americans.
Although King’s life was cut short, his dream continues to represent our country’s highest ideal – that all men and women are created equal — an ideal forged in the heat of battle and tempered not only through civil rights struggles, but also in the actions of every American who defends our nation.

Dr. King understood, as every Veteran understands, that freedom is never free. Generations of Servicemembers have stood against injustice, tyranny and oppression…and have broken the bonds of slavery around the world.

VA employees further Dr. King’s legacy of helping others by serving our diverse Veteran population. America’s Veterans, and those who serve them, know firsthand the sacrifices that thousands of brave men and women make every day to guarantee the security of our nation; to preserve our freedoms; and to preserve the ideals for which Dr. King gave his life.

The celebration on his birthday has become not only a day of remembrance, but also a day of service as he once said that “anyone can be great, because anyone can serve…All that’s required is a soul full of grace and a heart full of love.”

At the Department of Veterans Affairs, we can say with certainty and pride that we serve as one VA – we serve together. And those who have worn the uniform of the United States Armed Forces have truly served us all, and earned the honored title of Veteran. Our charge is to ensure VA serves all Veterans in the way they want and need to be served—so all Veterans can call it MyVA, and see it as an organization that they own and that treats them as they want to be treated.

Monday, Jan. 18, 2016, marks this year’s official national recognition of Martin Luther King Jr. Day. As the nation honors the memory of the famed civil rights leader, we at VA also honor his legacy and reflect on the way his influence has touched our lives.

We rededicate ourselves to the noble mission of serving Veterans – for their service and sacrifice opened the doors for millions of Americans to pursue their individual dreams.