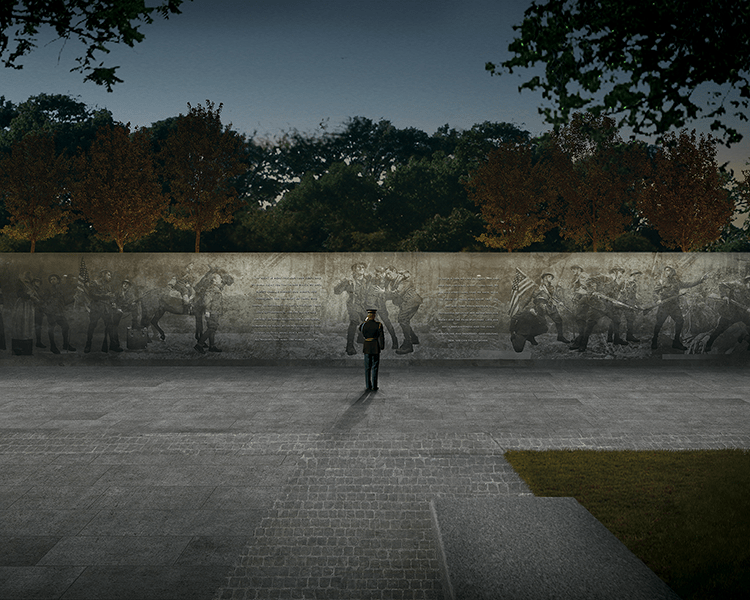 The nation’s capital will finally receive a national memorial dedicated to the Servicemembers who fought in “The Great War.” The U.S. World War I Centennial Commission selected the design team of Joe Weishaar & Sabin Howard and their design concept “The Weight of Sacrifice” for the National WWI Memorial at Pershing Park.

The design features distinct spaces that serve as both a memorial and an urban park. It includes an upper lawn bordered by maple trees with a freestanding sculpture, a sunken plaza that acts as a shield from the surrounding area for quiet contemplation, a 137-foot long “Wall of Remembrance” with quotations from the war, and the “Wheels of Humanity” sculpture on the upper plaza that recreates the engine of the war.

“Those five million Americans who served in uniform during World War I literally changed the world. This new landmark in our nation’s capital will be a worthy expression of their great legacy,” said Robert Dalessandro, chair, U.S. World War I Centennial Commission.

In 2014, Congress authorized the World War I Centennial Commission to create a national World War I memorial in Washington, D.C., and designated Pershing Park as the site for the memorial. Pershing Park is located one block from the White House on Pennsylvania Avenue, adjacent to the Willard Hotel and the District of Columbia’s Wilson Building.

Last spring, the commission launched an international design competition, seeking concepts for the national memorial. After receiving more than 360 submissions in Stage I of the competition, an independent jury of design professionals and historians selected five of the design concepts to advance to Stage II.

The five design teams consulted with representatives from the Commission, the National Park Service, the U.S. Commission of Fine Arts, the National Capital Planning Commission and other stakeholders to develop and refine their design concepts.

“We were thrilled by the work quality and creativity from all the participants in this competition. This selected design concept reflects a high level of professional achievement,” said Edwin Fountain, vice chair, U.S. World War I Centennial Commission and lead on the World War I Memorial project.

From here, the commission will spend the next several months with the designers to refine the design and will submit it to the National Capital Planning Commission for final approval.

Click here to explore the winning design concept or watch the video below on the five finalists and the selection process.