Veteran wants to improve the quality of life for amputees 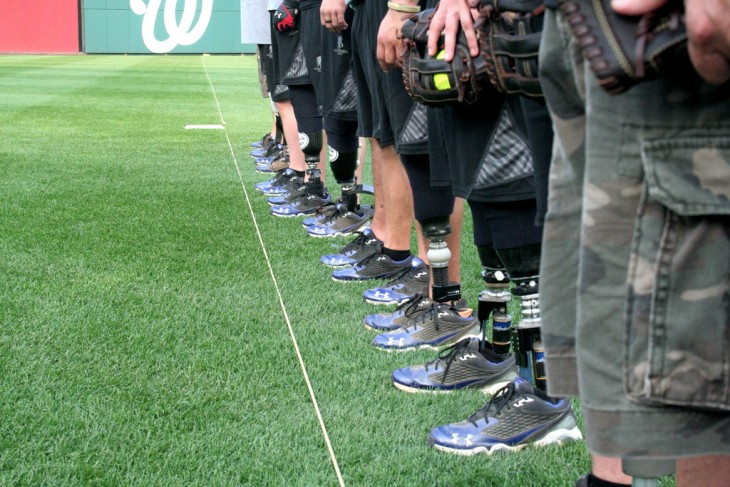 This article originally appeared in Harvard Medicine News and was recently featured in the Harvard Gazette.

Cameron Waites got his first biology lessons in the great outdoors — his backyard in Michigan.

“I just liked learning,” said Waites, a Harvard Medical School (HMS) student, Class of 2018, explaining the genesis of his interest in science. “We lived on a farm of sorts, and I was always outside, learning about different forms of life, cells, necrotic stuff and fossils. It was just something I felt drawn to.”

His story of a childhood interest in science isn’t unusual, but Waites is.

The seed of his vocation was planted and nurtured, he said, by his mother’s spirit. “She was the kind of person who always wanted to help someone, always saw the good in people,” he said. While he was still in school she earned a nursing degree and went to work in the local county jail instead of a hospital, making a career of serving the underserved, he added.

“I felt like I was called to medicine, and also to science. During my unit’s deployment to Iraq, I saw that some of my friends struggled with traumatic brain injury and post-traumatic stress.”
— Cameron Waites

Waites began to dream about becoming a physician as a teenager, at the same time that he began thinking about joining the Army. He had a vision of becoming a medic, a profession he admired. Now 34, he has fulfilled those goals.

Waites served in Iraq as an Army medic/health care specialist from 2004 to 2008. During his stint he delivered care to both military personnel and civilians — all in a variety of settings.

Waites believes he was dealt a good hand in the military, escaping the injuries that so many he knew endured. He found himself caring for friends who were not as fortunate, and his desire to serve wounded warriors sparked his interests in clinical medicine and research.

“I felt like I was called to medicine, and also to science. During my unit’s deployment to Iraq, I saw that some of my friends struggled with traumatic brain injury and post-traumatic stress” and other lingering medical issues, he said.

Waites said one friend, a triple amputee, lives in tremendous neuropathic pain and rarely uses his prostheses because of the additional pain they inflict. Even Oxycontin doesn’t help. Waites believes there should be a way to relieve the suffering of men and women managing the effects of similar serious injuries.

“Someone I know had so much taken away,” he said. “Small things, like being able to open the door for himself, mean the world to him. He doesn’t want anyone helping him with a door.”

With the National Institutes of Health’s Undergraduate Scholarship Program, Waites worked at the National Institute of Allergy and Infectious Diseases from 2010-12, then earned his master’s degree in neuroscience from Oxford’s Pembroke College as a Clarendon Scholar. From 2013-14, he was back with the NIH.

At Oxford, Waites worked on two research projects that helped solidify his interest in the inflammatory components of an injury, as he studied how the effects of tissue damage change over time.

“I’ve always been interested in the fine details of why things are happening the way they are, at the cellular and molecular levels. So, with PTSD or traumatic brain injury, I ask what changes are happening in the brain that, over time, can affect someone who has this condition,” he said.

At HMS, Waites is involved in a gene-expression investigation in the Department of Orthopedics at Brigham and Women’s Hospital. The study is examining neuromas, a common complication in amputees caused by a thickening of nerve tissue in the severed limbs.

Neuromas can cause extreme pain with even minor stimulus, such as a light touch or change in temperature. As in cases where amputees experience phantom limb pain, the nerves appear to continue growing after amputation, but no one has yet been able to determine what causes the condition. The project is investigating why the nerves keep growing, with an eye to advancing the science of limb regeneration.

Waites hopes his research will provide solutions that help his fellow Veterans. He said he would like to go into a surgical specialty, possibly orthopedics, to learn more about traumatic injuries to extremities — not only how to repair them, but how to help people regain function.

“In 10, 20, or 30 years, we will be able do something to help amputees,” Waites said. “Prosthetics work for some people, but they also hurt many of the people they are intended to help.”

To help relieve suffering, he said — that is his true calling.

Editor’s note: VA Boston Healthcare is an affiliated teaching hospital of Harvard Medical School. This article originally appeared in Harvard Medicine News and was recently featured in the Harvard Gazette.

About the author: Susan Karcz is assistant editor of Harvard Medicine magazine. Susan has also worked at the production coordinator at the New England Journal of Medicine, and served as managing editor of the Food and Nutrition Bulletin, published by the International Nutrition Foundation. Susan holds a Bachelor of Arts in English from the University of Massachusetts at Amherst, a Master of Arts in English from the University of North Carolina at Chapel Hill, and a Master of Public Health from Tufts University School of Medicine.