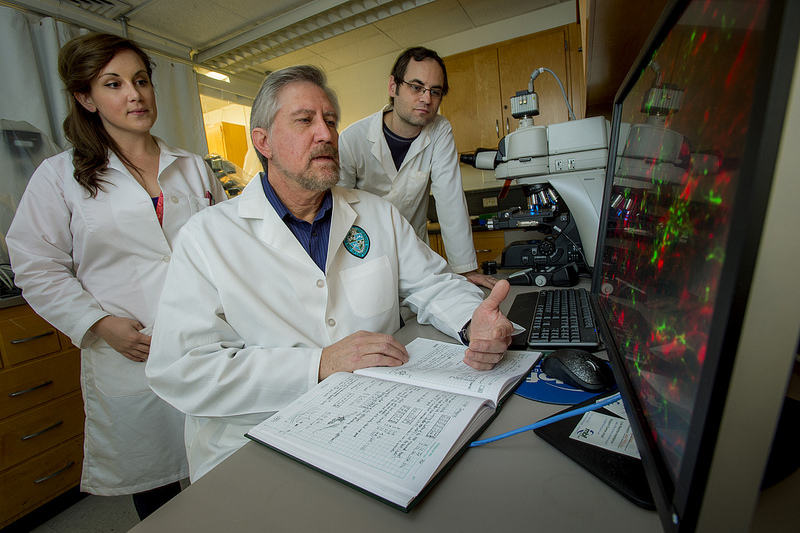 In 1997, my team of scientists from the Southeast Louisiana Veterans Health Care System and Tulane University School of Medicine discovered a peptide, a small protein found in the brain, called endomorphin-1, that acts on the same receptor as morphine to relieve pain in the body.

Based on that finding, we looked to develop a new drug alternative to traditional opium-based painkillers like morphine, one with fewer side effects and less potential for addiction. Because our peptide has a very different structure than morphine, which comes from a plant, yet is similar to the natural peptide found in the brain, we thought it might be better at relieving pain and have fewer side effects, relative to morphine.

Our recent research study, published in the journal Neuropharmacology, tested many engineered versions of the peptide structure with three goals: to make it stable so it could serve as a drug, to provide long-lasting pain relief, and to avoid side effects.

The team conducted several tests in rats and mice, the most commonly used animal models that predict effects in humans. The first tests determined variations of the drug that produced effective pain relief, showed reduced respiratory depression (the cause of fatalities from opioids), and had less impairment of motor coordination. In other words, we selected compounds that were as efficacious as, but safer than, opium-based painkillers.

Older adults, including our elderly Veteran population, are the most in need of pain relief, while at the same time they are at the greatest risk of suffering severe injury due to a fall. Likewise, active duty military members need pain relief without the loss of motor coordination. It’s a critical safety issue.

Next, we examined longer-term effects. Drugs like morphine produce tolerance, the requirement for higher doses over time to maintain a given level of pain relief. This dose escalation can contribute to side effects. The new drug showed substantially less tolerance than morphine. This difference may be due to a nervous system inflammatory response that was seen with morphine but not with the endomorphin-based drug. The absence of an inflammatory effect may also indicate improved pain treatment for conditions like traumatic brain injury, in which inflammation in the brain can contribute to long-term cognitive impairments.

Finally, we tested several animal models for reward and addiction potential. Animals given morphine were more likely to return to the place where they were given morphine and also were more willing to work harder at pressing a bar for a morphine infusion. In other words, there was a stronger addictive tendency associated with morphine than was observed with the new endomorphin-based drug.

The development of a safer pain reliever with less likelihood of abuse is important because according to the Centers for Disease Control and Prevention, overdose deaths from opioid painkillers in the U.S. have quadrupled since 2000.

Most currently used opioid painkillers, like oxycodone and hydrocodone, are based on chemicals that were discovered around 100 years ago, or on morphine, discovered about 200 years ago. To get different results, our thinking was “why not start from scratch with a new compound.”

Because this structure could show fewer side effects, not cause a pro-inflammatory response, and be less addictive, we hope the drug will address two major issues for Veterans: better treatment for pain, and reduced opioid addiction.

There is still a lot of work to do before human clinical trials can begin, including standard FDA safety, toxicology and pharmacology tests, but our latest study and its findings could be significant in the long-term care of our Veterans.

About the Author:Dr. Zadina is a professor of medicine at Tulane University and director of the Neuroscience Laboratory at the Southeast Louisiana Veterans Health Care System.