Female World War II pilot proud to be a WASP 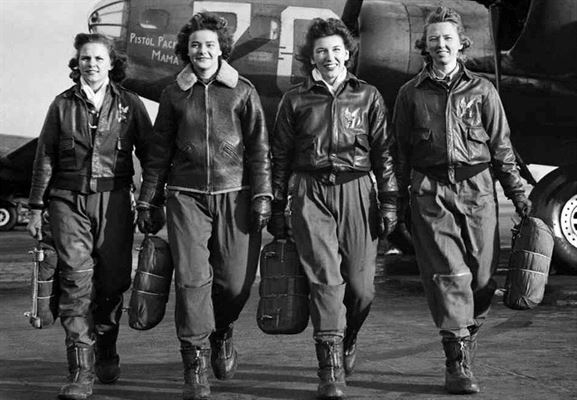 This article was originally posted on Defense.gov.

For one Larned, Kansas, native, Women’s History Month means more than just honoring the many women in science and the military who set the stage for the women of today and in the future.

Lucile Doll Wise, a Women’s Airforce Service Pilot, or WASP, during World War II, is one of those pioneers. In September 1942, the Army Air Forces needed pilots, so after the attack on Pearl Harbor, Army Air Forces commander Gen. Henry H. “Hap” Arnold established the Women’s Auxiliary Ferrying Squadron, or WAFS, and the Women’s Flying Training Detachment, or WFTD.

According to the Air Force Historical Support Division, the WAFS and WFTD merged into a single unit on July 5, 1943. The now-unified group was called the Women’s Airforce Service Pilots, or WASP, with its pilots known as WASPs.

“Our mission was to perform flying duties in this country to relieve male pilots for overseas combat service,” Wise said.

Wise joined the WASPs in May 1943, and served until they were disbanded in December 1944. “I was thrilled at the prospect of flying the larger and faster military aircraft and at the opportunity to help in the war effort,” she said.

Her younger brother enlisted in the Navy just before he graduated from high school in 1943, and he was permitted to graduate before he headed to serve on a ship in the South Pacific. “Of course we were all worried about him,” she said. “He returned safely, but perhaps a bit damaged emotionally.”

Wise said she went through the same training as the male cadets, living in barracks under military discipline, learning to march, making beds the Army way and more.

“It was a cultural shock, giving up our comfortable homes, nice clothes and social life but we didn’t complain because we were so thrilled to be flying military aircraft,” she said.

“Our first and most important job was probably ferrying aircraft from factories to air bases and points of embarkation. There was an alarming shortage of pilots at the beginning of the war, and we delivered more than 12,000 aircraft in the two years we operated,” she said. “We also performed many other domestic flying duties.”

She said they had a Cessna twin engine C-47, a five passenger plane they had flown in training.

“It was slow but dependable,” Wise said. “Later, another WASP was assigned there, and we got the larger Beech C-45. Our assignment was to fly the weather officers wherever they needed to go, usually on inspection trips to all of the AF bases in the region and to meetings. My favorite aircraft, and the favorite of most of us, was the AT-6 [Texan], which we flew in advanced training. It was a wonderful plane. I got plenty of flying.”

She said when she entered the WASP program, she had 50 hours, and when it disbanded, she had almost 700 flying hours.

“When traveling, I usually stayed on base in the nurse’s quarters, although sometimes we stayed in hotels,” Wise said. “One base in Nebraska had no women on base, and the small town had no hotels, so I was given a room in the hospital. Our trips often lasted four or five days, leaving on Monday and spending a day at each air base and returning later in the week. It was a large seven-state region with many air bases.”

She said she loved her job.

“I loved every minute of it, but it was not easy,” Wise said. “It was hard work, and I came back from trips pretty tired.”

Arnold fought to have the WASPs militarized into the Army Air Force, but Congress disbanded them, Wise said, adding that she was disappointed.

“We had a handsome uniform and officer privileges, but I really wanted to be militarized and get a commission,” she said. “We were working hard and did not realize that we were making history as the first U.S. women to fly military aircraft.”

For 33 years, the women weren’t allowed to call themselves veterans and their records were classified and sealed from the public. They fought Congress and pushed for publicity. On Nov. 23, 1977, President Jimmy Carter signed a public law granting former WASPs veteran status with limited benefits. The Air Force graduated its first female pilots that same year.

“It was wonderful,” Wise said. “I was living in the D.C. area at the time and helped with the lobbying effort. It was a thrill to attend the hearing and have contacts with Congressmen. It was a great help for a few of us who were without health insurance or in financial trouble to be eligible to be treated at military hospitals.”

Life after the Serving

Wise said she made great friends and meets up with her fellow WASPs at reunions.

“I made some great friends in the WASP program,” she said. “Some of them were from wealthy families, but I did not realize it at the time. We all looked alike in our ‘zoot suits.’ We met often at reunions and other women’s aeronautical meetings. I am grateful for my opportunity to serve, and I believe we all feel the same way. The WASPs went through a unique experience, and we all have a close bond.”

“I’m so impressed by what women pilots are doing today, especially flying into combat,” she said. “They are doing some great flying and proving once again that women can fly military aircraft as well as men.”

She said she tells young women who may be considering the military that “the military is not for everyone, but it offers a great opportunity to young women.”

Shannon Collins is a writer for DoD News at Defense Medica Activity in Fort Meade, Maryland. She is an U.S. Air Force Veteran. This article was originally posted on Defense.gov, (Follow Shannon Collins on Twitter: @CollinsDoDNews)