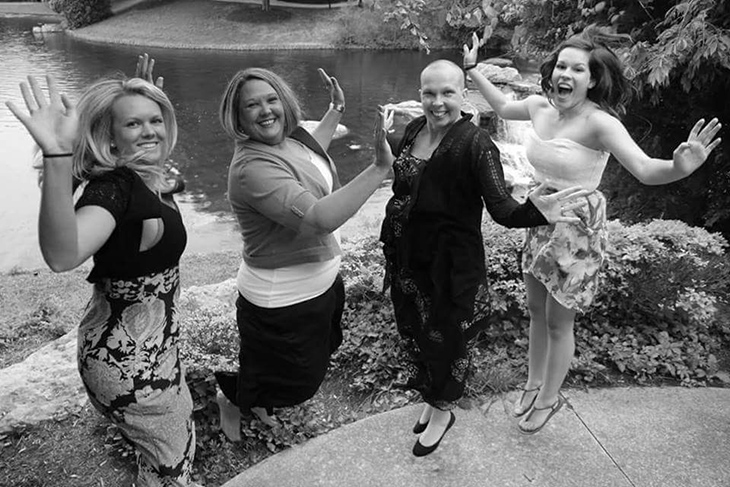 Gulf War Veteran Laura Thompson, a former Army supply clerk, had finally met her soulmate. She met Mark in 2012 through an online dating service and they hit it off right away.

They shared a love for cycling, as well as community and family, and spent time getting to know one other and bonding with one another’s children.

In January 2014, they permanently blended their families and were married by a justice of the peace. They postponed a fairy-tale church wedding so the family could quickly move into their dream home. But just six months later, Laura was diagnosed with cancer.

That next year, Laura’s medical team at the Robley Rex Veterans Affairs Medical Center in Louisville, Kentucky, told her she was not going to recover from the cancer. She would have to say goodbye to Mark and their four children—the youngest of whom was only 16 years old, as well as a brand-new grandchild.

Laura’s sister Jodi was determined that Laura would still have her dream wedding, complete with flowers, music, tuxedos and a wedding dress fit for a princess bride. With a little planning, Jodi was able to give Laura this part of her dream; but the couple still had not had their honeymoon.

That’s when VA volunteers stepped in with their “Final Mission,” which was created in November 2015, by the Louisville VAMC’s Voluntary Service, with the desire to grant wishes to dying Veterans. The program embodies the VA mission of caring for Veterans, even throughout their last days.

When Laura was approached about the Final Mission, she had three wishes: a honeymoon, an engraved wedding ring for her soulmate and wooden keepsake boxes for each of her children. She had also written cards and letters to them to mark the milestones in their lives that she would miss.

The Louisville VA Voluntary Service team took swift action, immediately working to fulfill Laura’s wishes. But as the honeymoon trip was being planned, Laura’s health worsened, and she became unable to travel. VA volunteers delivered a meal to her and 14 family members a couple of weeks before Christmas, and she had the opportunity to be surrounded by loved ones. The meal, the gifts—which included a special patriotic quilt donated from the community— and monetary donations were delivered and set up in Laura’s home. In addition to VA, Veterans service organizations responded when they learned of Laura’s plight, sending the donations to help her family with any later expenses.

“We were able to present Laura with the quilt and the other gifts to her in her home, with all her family members around her, thanking her for her service. We expressed the honor we had in knowing her. Everyone who learns of this program is very interested in being a part and helping.”

Though Laura was unable to get to the beach, VA volunteers brought her the next best thing—a scented “beach on a tray,” including a noise machine to mimic the sound of waves, miniature beach chairs, sand and seashells. She immediately ran her fingers through the sand, and her husband joked that he could remove her socks and place her feet in the tray, if she wanted to sink her toes in it as well.

The Final Mission has so far assisted four Veterans and their families. The program was inspired by Veteran Timothy Webb, who was diagnosed with cancer in 2014. In his last days, he was cared for in the VA hospice unit in Louisville, and a social worker learned of his love of University of Louisville football. Through the efforts of the hospice staff and volunteers, Webb received a visit from some of the University of Louisville football players.

This moment of joy was very meaningful to everyone involved, especially his family and the event that inspired Voluntary Service to create the Final Mission program. It started with a ‘what if.’ What if there was a way to let the community know when a Veteran had one last place they wanted to visit, one last experience they wanted to have, or one last visit with a family member … and we could make that happen?

There are many benefits to the program, but fulfilling a Veteran’s wish is the focal point.

Veterans and families may find a stronger sense of hope in the fact that they have something to look forward to. The wish process can strengthen family members’ bonds by helping them to create meaningful times and recall precious memories.

“Conversations between our health care team, Veterans and families help them develop and establish trusting relationships. They can also reminisce about the past and identify any unresolved issues.”

The activity of choosing a wish also serves as a diversion from the Veteran’s physical limitations and discomforts. By granting the wish, it is hoped that Veterans and their families will experience a moment of peace and fulfillment that overshadows the burden of the illness.

Veteran Laura Thompson was there to see her daughter turn 18, but passed away before Christmas. She was only 38 years old.

Jodi’s sister commented on what the Final Mission and VA volunteers meant to Laura and her family:  “One of Laura’s final wishes was to be able to take a trip with her husband Mark to the beach one last time. The sound of the ocean and the warm sand between her toes made her feel more at peace and alive than anywhere else. When the Final Mission program stepped in—not only making memory boxes for her children and grandchild, and helping her get Mark an engraved wedding ring, but also offering to send her on this dream trip—Laura’s happiness and gratitude were overflowing. Such actions touched Laura and all of us more than you will ever know. The Final Mission not only helped to bring peace of mind to Laura at the end of her life; it also brought her joy. We all were amazed by the charity shown to Laura and the entire family, as this program was there to help where they could; and the people were kind, generous, and above all … genuine.”

This year is the 70th anniversary of VA Voluntary Service—one of the largest volunteer programs in the federal government. To learn more about how VA assists Veterans and their families, or to find out how to volunteer, visit http://www.volunteer.va.gov.

Adelina Hay Sowell is the chief of Voluntary Services at the Robley Rex VA Medical Center in Louisville, Kentucky. She created the Final Mission Program to bring joy and special memories to Veterans and their families during a difficult time facing the end of life. Sowell is a U.S. Army Veteran and a graduate of the University of Southern Mississippi with a degree in History.