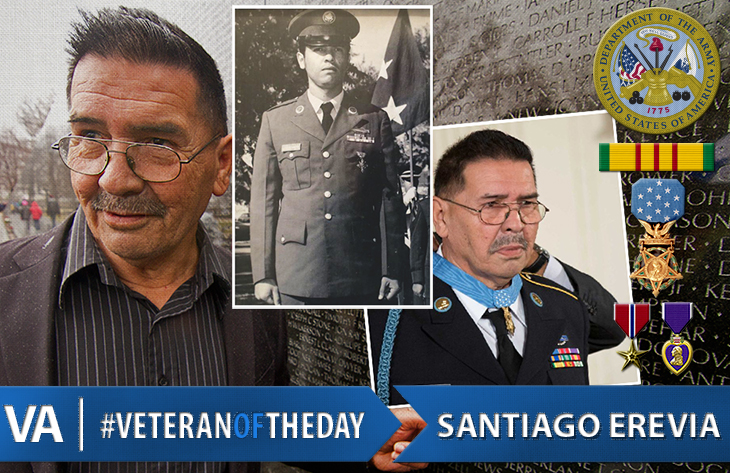 On May 21, 1969, the quiet and reserved Erevia was part of a task force whose mission was to sweep and clear an area in the Tam Ky Province of Vietnam. During the mission, his unit came under intense enemy fire. Erevia was directed by his squad leader to render first aid to the wounded, while the rest of the unit advanced on the ambushing enemy forces.

A few minutes later, Erevia and the wounded men in his care were attacked from four fortified enemy positions to Erevia’s front left. Completely disregarding his own safety and under intense enemy fire, he gathered extra ammunition and another M-16 rifle and charged the first of the four enemy positions.

Arriving at the first position, Erevia kicked open the hatch and dropped a grenade, destroying the enemy position. He repeated this act on the second and third positions.

Out of grenades, he approached the fourth position firing both M-16 rifles, effectively providing his own cover fire. When he kicked open the hatch, the enemy, mere inches from Erevia’s head, began firing, but it was Erevia who would be victorious in the close-quarters firefight.

Erevia’s actions directly contributed to saving the lives of the wounded in his care as well as propelling the morale and resolve of his fellow Soldiers during the intense battle.

When word spread of Erevia’s actions, many in his unit were in disbelief. The man who rarely said a word would become the man who would save the lives of countless American Soldiers and go on to be awarded the Medal of Honor for his bravery and courage under seemingly insurmountable odds.

As the end of Erevia’s citation reads, “Specialist Four Erevia’s conspicuous gallantry, extraordinary heroism, and intrepidity at the risk of his own life, above and beyond the call of duty, were in keeping with the highest traditions of military service and reflect great credit upon himself, his unit, and the United States Army.”

Erevia was originally awarded the Distinguished Service Cross for his actions, but a review of award records determined his actions met the standards for award of the Medal of Honor. The medal was presented to him on March 18, 2014.

Erevia left the Army and began a 32-year career as a postal carrier near his home of San Antonio. He was the father of four children and spent his retirement years updating his home and walking to stay healthy.