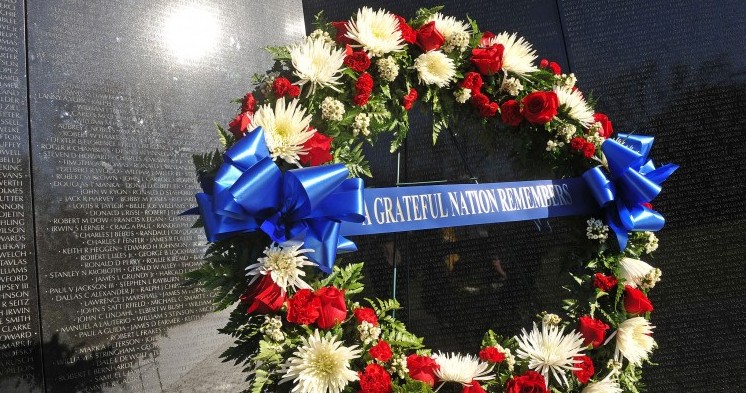 VA Secretary Bob McDonald, along with Defense Secretary Ashton Carter, honored the men and women who served on this Vietnam Veterans Day with a wreath-laying ceremony at the Vietnam Memorial Wall in Washington, D.C. The event was part of the nationwide 50th Commemoration of the Vietnam War.

“This commemoration has special significance for those of us at VA because of our honored mission to serve those who have ‘borne the battle’,” said McDonald. “It’s also an opportunity to remember our VA colleagues who served in this generation of Veterans, to extend our heartfelt appreciation to them and to their families who shared the burden of their loved one’s service.”

“As Secretary of Defense I’m proud to use this moment, this place, on this day to say ‘Thank you, and welcome home.’ You could never hear those words enough,” said Defense Secretary Ashton Carter.

U.S. Army Veteran Vincent L. Smith III, who served with the 23rd Infantry Division, was grateful that Vietnam Veterans were finally getting the recognition they deserved. “[Being at this ceremony,] it’s something like a closure. We were not looked upon highly when we returned in ’71 by the public at large. I remember when I came home my family members were treating me like I was a stranger. This is great. I’m speechless at that. It’s just overdue and I’m thankful for this,” he said.

More than 9,000 organizations across the country have joined with VA and the Department of Defense as commemorative partners for the 50th anniversary. VA is a major partner in the commemoration, hosting 329 events at VA facilities across the nation today to honor and thank Vietnam Veterans and their families for their service and sacrifice.

This morning, Vietnam Veterans joined together at the Lexington, Kentucky VA Medical Center for a flag raising ceremony in honor of their service. (VA photo/Megan Moloney)

Lexington, Kentucky, is an example of those joining in the effort. The city’s mayor, Jim Gray, issued his own proclamation designating March 29 as Vietnam Veterans Day writing in part “.. the Lexington Veterans Affairs Medical Center, which serves nearly 40,000 Veterans each year, will host a special flag raising and reception at each division and community-based VA clinic in commemoration of the service of our Vietnam Veterans.”

“When Vietnam Veterans came home 50 years ago they didn’t get the kind of welcome that Veterans get today. What Ash and I tried to do today was to welcome home all those Veterans and make sure that they felt the thanks and appreciation that Veterans today feel. It’s a great honor for us to be here to honor Vietnam Veterans, to honor their service to our country,” said McDonald.

Authorized by Congress, established under the Secretary of Defense, and launched by the President in May 2012, the Vietnam War Commemoration recognizes all men and women who served on active duty in the U.S. Armed Forces from Nov. 1, 1955, to May 15, 1975. The commemoration extends through Veterans Day 2025. Nine million Americans, approximately 7 million living today, served during that period, and the commemoration makes no distinction between Veterans who served in-country, in-theater or were stationed elsewhere during those 20 years. All answered the call of duty.