Home / Adaptive Sports, Top Stories / From the bottom of the barrel to the top of the world, a Veteran’s journey from addiction to recovery

From the bottom of the barrel to the top of the world, a Veteran’s journey from addiction to recovery 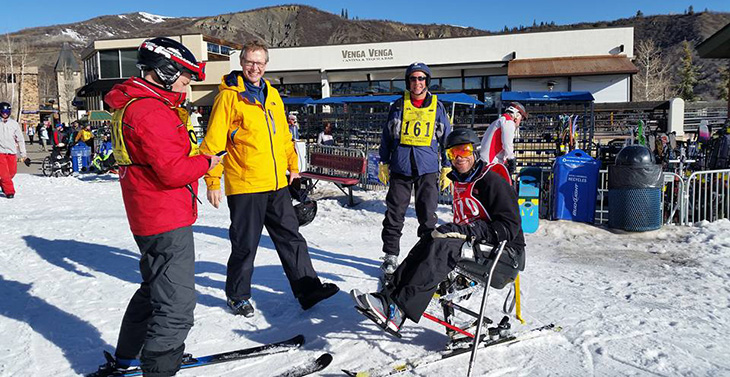 “You have to find your own bottom before you can get your way back up.”

Those are the words of Marine Corps Veteran David McPherson who decided to face his demons and climb out of the hole he found himself in many years ago. His words resonate with many Veterans who find themselves traveling down a path of self-destruction.

McPherson joined the United States Marine Corps in 1979, but a 45-foot fall from a building during a training exercise in 1982 cut his service short.

He suffered a broken back and broken legs resulting in what doctors call incomplete paralysis, where McPherson still has some motor and neurological function in his legs, but not enough to walk unassisted.

Not having the Marine Corps and not really knowing how VA could help, McPherson began abusing the pain medication he had been prescribed.

When the pain pills stopped being effective McPherson turned to more powerful, and illegal, drugs and alcohol to cope with the mental and physical pain.

McPherson’s downward spiral and hopelessness eventually landed him behind bars, where he says he finally had the opportunity to get his mind in the right place.

McPherson owns his addiction and is adamant that Veterans have to be their own advocate, saying, “Nobody is going to make you come here and do this, you have to want it.”

The VA Adaptive Sports Program and Disabled American Veterans put on the Winter Sports Clinic, as well as other adaptive sports events, to get Veterans—who otherwise would not have the ability or means to stay active — active.

It has an ancillary benefit for Veterans like McPherson, it gives them hope, direction, and a sense of belonging.

“I keep getting better, getting more social,” McPherson said with a smile on his face. “I have a whole new community of friends, I went from homeless to homeowner, from riding a bicycle to now driving a brand new truck.”

McPherson has been drug-free for more than eight years now and is excited to pursue his instructor certification in mono-skiing.

When asked what he would say to a Veteran who has not found the Winter Sports Clinic or recreational therapy, McPherson says, “Come on, brother. Give it a shot.”

“The Winter Sports Clinic is an intricate part of an injured Veterans’ recovery. If the young guys get in here and we can mentor them, we can help them not go down the path I went down, that’s a good day,” he shared.

McPherson’s journey to the Winter Sports Clinic was a long road, but if there is anything I learned from talking to him it is that there is help out there if a Veteran is willing to look for it; and, it is never too late to turn things around.

The bottom is a solid surface from which we can build something new. If you’re a Veteran struggling with life, reach out, help is out there and asking for it is a sign of strength.