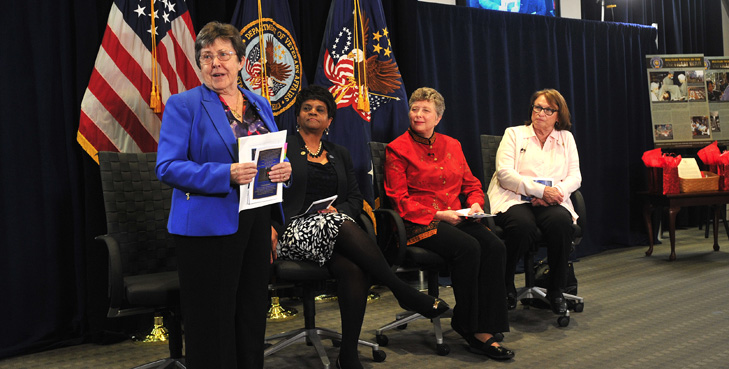 Late last month, VA’s Center for Women Veterans held a special event to salute women Veterans who served during the Vietnam War Commemoration period – the timeframe authorized by Congress to recognize all men and women who served on active duty in the U.S. Armed Forces from Nov. 1, 1955, to May 15, 1975, regardless of duty assignment location.

A panel of four women Vietnam Veterans — three of them VA employees — shared the challenges and triumphs of their personal military experiences from this pivotal time in history.

Schwartz, who served in the Air Force nearly 20 years, said that more than 265,000 women joined the military at a time when many men left the country rather than serve in the military.

“In many respects,” she added, “women were like a well-kept secret … they came in thousands to serve their country.”

After her own paperwork went through for the Air Force, she received a note from her county’s draft board. “In actuality, they sent me a letter to thank me for volunteering, because they said it would lessen the quota for our county by one man, because I joined. And so from the very beginning, I did not think that women were not as equal to men.”

As a flight nurse in Japan, Schwartz and her colleagues received the battle casualties straight from Vietnam.

“At that time we didn’t have the super aircraft that we have now,” she explained, “so therefore, people had to come to us, and we would stabilize them for the long journey home … so in many respects, we got to see the casualties of war as they were just beginning to understand what had happened to them.

“We’d never seen anything like this … And I had the opportunity to meet some of those Veterans and tell them how the nurses and everybody really tried very hard. It brought out the very best of us, and made me decide that I would never go back to civilian nursing; and I didn’t. I stayed in the military.”

Barbara Ward, as an Air Force charge nurse, cared for the seriously wounded troops arriving from the war by MEDEVAC. She now serves as the director of VA’s Center for Minority Veterans.

“I was always around Veterans and active-duty military,” she said. “My military friends became my family … I decided my passion and love was for serving Veterans, and so I went to work for the California Department of Veterans Affairs. So, from my perspective, I had the two years that I served in the Air Force … probably one of the highlights of my life, without a doubt. And it certainly well prepared me for being a leader in private industry, throughout my career.”

Panelist Karen S. Vartan, R.D.N, M.Ed., currently serves as a program analyst in VA Navigation, Advocacy & Community Engagement. As a U.S. Navy officer coming in at the end of the Vietnam era, she saw many changes.

“There was transition in society, in the mores, the culture (and) education,” she said. “So what was in between that created that gigantic shift in just three years?”

According to Vartan, as the country’s wartime operations slowed to accommodate peacetime, there were a number of reasons.

“People had to adjust in many ways. I think the confluence of the Equal Rights Amendment and the end of the draft and these other changes … just helped really facilitate a very positive spotlight on women and leadership in the services.”

Marsha Tansey Four was stationed in Vietnam with the U.S. Army Nurse Corps, and is a recipient of the Bronze Star Medal for her work in Vietnam. She is currently the vice president of Vietnam Veterans of America.

“I went into the Army Nurse Corps on the student program,” said Four. “The Army came in and said, ‘You know we got the perfect place for you here. When you graduate, you’re not going to have to look for a job … and you can request one of three assignments that we’ll send you to, never leaving the states unless you request it … and while you’re at school, we’re going to pay you money.’ Let me tell you something. That was real enticing.”

Four spent one year in country at the18th Surgical Hospital.

“It was a small facility. We had very limited capabilities, (and) only about 15 nurses. We had an emergency room, one medical unit, one post-op unit, and one ICU recovery room. I was assigned to the intensive care recovery room. One nurse and two corpsmen on 12-hour shifts, and usually we would get two days off every two weeks,” she recalled.

Four’s service in Vietnam was more than four decades ago, but it still has a strong influence on who she is today.

“It was for me the most important year of my life. It was for me, not only the time, but the place I grew up,” she said. “I am who I am because of it. Sometimes that’s positive, and sometimes it isn’t, but I’d like to think in the end … that I can believe that I was a part of something much bigger than myself, and that the things that I did brought help to others, consolation to some, and life for those that had their families put back together.”

In closing the celebration, an official pinning ceremony recognized those Veterans in attendance who had served on active duty during the Vietnam Commemoration period. Those eligible Veterans each received a lapel pin with the inscription: “A grateful nation thanks and honors you.”