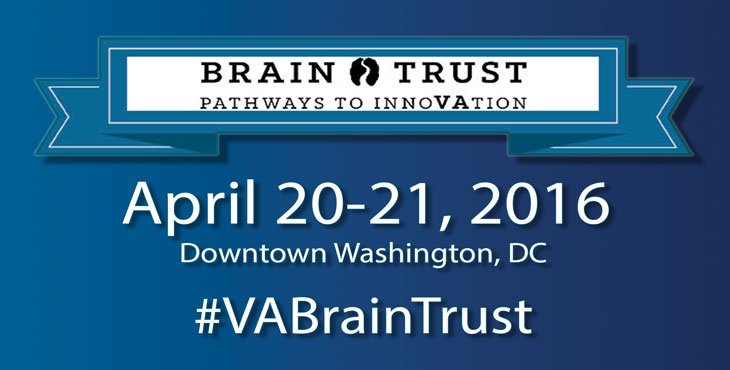 VA is leading a groundbreaking two-day event focused on brain health, Brain Trust: Pathways to InnoVAtion. The first annual public-private partnership event will take place this week at the National Press Club and the IBM Institute for Electronic Government in Washington, D.C.

Building on the extraordinary leadership and trailblazing efforts of a number of distinguished VA brain researchers, VA is convening many of the most influential voices in the field of brain health – to include the Department of Defense, the sports industry, private sector, federal government, Veterans and community partners – to identify and advance solutions for mild traumatic brain injury (mTBI), and Post Traumatic Stress Disorder (PTSD).

Issues related to brain health and head trauma transcend the Veteran and military community, impacting all Americans. By highlighting the themes of collaborative research, medical technology and sports innovation for player safety, Brain Trust participants will discuss the prevention, diagnosis, treatment, rehabilitation and reintegration of Veterans, athletes and Americans in general – suffering from head trauma related injuries. The event will also serve as a showcase for many of the advancements that VA is pioneering to improve brain health for Veterans, the military and for the American public at large.

In addition to many of the world’s most accomplished brain research scientists, other confirmed participants in the summit include sports commentator Bob Costas, Gen. Peter Chiarelli (CEO of One Mind, and the former Vice Chief of Staff of the Army), Briana Scurry (former U.S. Women’s Soccer Player), Jeanne Marie Laskas (author of the GQ article that inspired the movie Concussion), Terry O’Neil (16-time Emmy award winner), representatives from the NFL Players Association, the NFL, the NCAA, DARPA, DOD, NIH, CDC, and many more.

During the summit a special announcement will be made by Chris Nowinski, co-founder of the Concussion Legacy Foundation (CLF) and former WWE professional wrestler. Joining Chris will be a former Super Bowl champion and an Olympic gold medalist, each of whom will be using this summit to announce that they will be donating their brains to the CLF for the purposes of advancing brain health.  CLF has partnered with VA and Boston University to establish the VA-BU-CLF Brain Bank, directed by VA’s own Dr. Ann McKee, now the largest sports mTBI and chronic traumatic encephalopathy repository in the world with over 325 brains donated, and over a thousand more pledged.

“VA is uniquely positioned to contribute to the care of Veterans with traumatic brain injury,” said VA Secretary Bob McDonald. “The work we do produces results and life changing improvements in care for Veterans — as well as for all Americans, and for people around the world who suffer from these brain related injuries.”