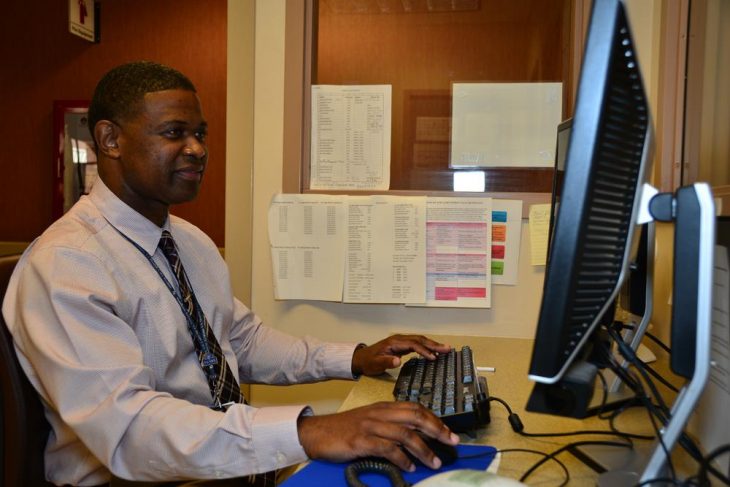 All three of these Veterans and many countless others that have faced challenges with mental health, substance abuse or homelessness have found a way to improve their lives through the Compensated Work Therapy (CWT) Program. The program’s aim is to provide Veterans an opportunity to gain valuable long term employment skills and also give them the resources they need for a hopeful future.

“We usually get Veterans that are in other programs here at the Tucson VA,” said Allison Davis, who oversees the CWT program. “Usually, these Veterans have found stable housing, and are working on their mental health issues, and soon they realize that they were happiest when they were working and providing for themselves.”

According to Davis, most of these Veterans that want employment have been out of the job market for many years due to significant challenges they have faced.

“We sit down with the Veterans and ask them what meaningful employment would look like for them at the end of the program. We also look at what issues have jammed them up in the past and help them move forward by getting rid of barriers,” said Davis.

A CWT Program participant performs some landscaping work at the Tucson VA’s main campus. The CWT Program provided Veterans the opportunity to gain valuable employment skills and resources for a hopeful future.

The program helps Veterans develop basic works skills that are essential to successful long term employment, such as appropriate dress/appearance, personal hygiene, punctuality and getting along with other co-workers. CWT Veterans start their journey to full time employment and recovery by working at the Tucson VA campus in various positions which may include housekeeping, grounds maintenance, laundry, and mailroom. There is also one off campus work site washing dishes at a Tucson restaurant.

“(Through the CWT program) I have learned how to work with other people and respect what other people need, prior to my experience in CWT I didn’t really put any thought into what other people were dealing with,” said Tim, a CWT peer support specialist at the Tucson VA.

During his time in CWT, Tim was able to realize that he was an unhealthy person because of drinking and needed to make some changes to get his life back in order. He found out about the program through his substance abuse specialist.

He credits his accelerated recovery on the CWT program. Now, he is helping other Veterans at the Tucson VA in their individual paths to recovery by relating to them and encouraging them to make positive changes.

“As a peer support specialist, I can say I’ve been there, for I’ve been fired over 100 times, and I know exactly what goes on in a job,” said Tim.

He meets with the Veterans one-on-one and explains the pathway toward positive changes, what it means to be sober, and the importance of seeking the right kind of help.

“(I help them to understand that) It’s okay to ask for help, and it’s okay when they accept help. They can also learn to make some changes based on that help,” said Tim. “Then eventually people will come to them for help, and the reward of that is worth everything.”

A Tucson VA medical support assistant credits the program with getting his life back on track after a series of bad choices due to alcohol abuse.

“Getting into the CWT program was one of the best things that happened to me,” said Orlando, “I met with Allison once a month, and we talked about goals, wrote them down, and envisioned where I saw myself.”

He credits the CWT staff at the Tucson VA with ensuring that he was meeting the goals he set out for himself and also giving him the tools to be successful. The only obstacle he felt that he faced was himself.

“I had to let my pride down and take advice from someone else and try something different,” said Orlando.

Working at the coffee shop in the Tucson VA gave him exposure to lots of staff members in different departments.

“What I didn’t know is that I was being interviewed every day by many different staff. They would come in every day and watch you,” said Orlando.

One day, he was encouraged to put in an application and resume as a medical support assistant, and a year later he was hired. He attributes his success on providing the best customer service possible, and the support he received during his time in CWT.

Through VA’s Compensated Work Therapy Program, Veterans an opportunity to learn  employment skills and also give them the resources.

“I’m very thankful for the job I have now. I’m helping other Veterans,” said Orlando.

He also encourages Veterans that may be homeless or struggling with any type of addiction and want to get back into the workforce to check out the program.

“It helped me get my life back on track and now my life is a lot better than what it was,” said Orlando.

Another Veteran credits the Community Employment Coordinator Program, which is part of the CWT, for helping him get a stable job in the community after being out of the job market for over a year. He received help with his resume, as well as some clothing for job interviews and even a ride to job interviews.

“I found it a little intimidating even to go to the job services (employment agencies) and type in a resume on their computer. The whole time you are thinking ‘Why would they want to hire me?’, but when you have the support here (at Tucson VA) you know that eventually it will work out and they will help you find a job” said Christopher.

Community support is essential to the CWT programs success in helping Veterans that have encountered setbacks to start a successful future.

“We want to collaborate with the community, and we want to build relationships with employers that would be willing to have transitional work placements or hire our Veterans permanently,” said Allison. “Most employers are willing to work with us and bend over backwards to keep Veterans in the jobs they hired them for.”

For more information about the CWT program or if you are an employer that wants to participate in the program, visit http://www.va.gov/health/cwt/.

About the author:  This article was submitted to VAntage Point by Luke Johnson from the Southern Arizona VA Health Care System.