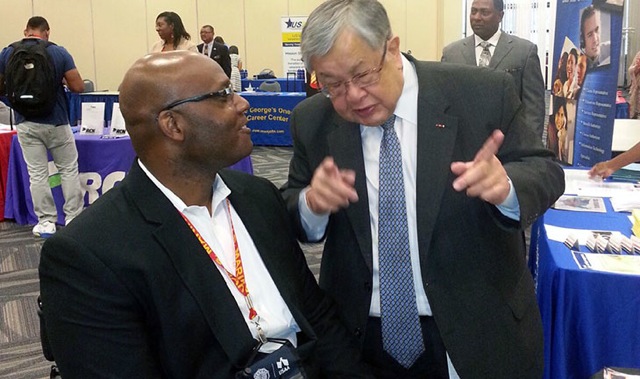 As we underscore the work of deserving employees from May 1-7 during Public Service Recognition Week, I am taking this moment to shine the light on a member of my team in the Veteran Employment Services Office, part of the VA’s Office of Human Resources and Administration.

A U.S. Marine Corps Veteran, Wright served as an infantry squad leader from 1982-1986. He said his proudest moment was his stint in Beirut, Lebanon, after the bombing of the Marine barracks on Oct. 23, 1983, during the Lebanese Civil War.

“The bombing of the barracks is one of the single deadliest days in Marine Corps history,” Wright said. “We lost 241 troops that day, 220 of them were Marines.”

The lessons he learned in the Marine Corps have helped him to make great strides at VA, Wright said. “In the military, I learned perseverance — the ability to see things all the way through and how to show genuine concern, not only for my troops but all the people who’ve worked as my subordinates.”

“I choose not to focus on the fact that I am in a wheelchair,” Wright says. “People see me rolling in to work, but in my mind’s eye, I see myself walking in. If I saw myself any other way, it wouldn’t work. I guess, in a sense, that’s my coping mechanism.”

That call to persevere has fueled his fervor to collaborate with other agencies and organizations that serve and employ disabled Veterans.

Last year, Wright worked with the Department of Labor’s Office of Disability Employment Policy to select the recipient of the fiscal 2015 $1.85 million cooperative agreement to manage a National Employer Policy, Research, and Technical Assistance Center on the Employment of People with Disabilities.

In October of 2015, Wright helped the Department of Labor’s Workforce Recruitment Program find federal internships for college students with disabilities. As a result, more than 1,800 students were connected to employment opportunities.

He also collaborated with the Social Security Administration to record the “Ticket to Work/ADA Anniversary Reflection” podcast commemorating the program’s 15-year anniversary as well as the 25-year anniversary of the Americans with Disabilities Act (ADA). On the podcast, Wright shared some of the professional challenges faced by people with disabilities, a subject with which he is personally familiar.

Collaborating with Semper Fi Odyssey Wounded Warrior Program, Wright has, to date, helped train more than 1,000 wounded, ill and injured Servicemembers in their transition back to civilian life while they await medical discharge.

Wright’s calling to help disabled Veterans preceded his arrival to VA. He has more than 18 years of combined experience in the areas of operations, disability program management, policy analysis and development, and marketing and outreach with federal agencies, such as the Department of Labor, the Social Security Administration and Veteran services organizations.

He was a recipient of the Governor’s Committee on Employment of People with Disabilities Evie Cutler Public Service Award, an honor bestowed on a Maryland professional who demonstrates outstanding performance while going beyond the call of duty in support of employment of persons with disabilities.

Beyond professional accolades, it is Wright’s personal testimony of overcoming hardship that has left its mark on those who meet him. Left paralyzed after an auto accident in June 1986, he often shares his life experience as a way to encourage others and bring awareness about employing professionals with disabilities.

“I choose not to focus on the fact that I am in a wheelchair,” Wright says. “People see me rolling in to work, but in my mind’s eye, I see myself walking in. If I saw myself any other way, it wouldn’t work. I guess, in a sense, that’s my coping mechanism.”

Chief of Field Operations for VA’s Veteran Employment Services Office, Andrée Sutton is a retired Air Force chief master sergeant with a background in recruiting. She also is a licensed professional counselor, who focuses on aiding combat Veterans, families in crisis and those seeking career guidance.