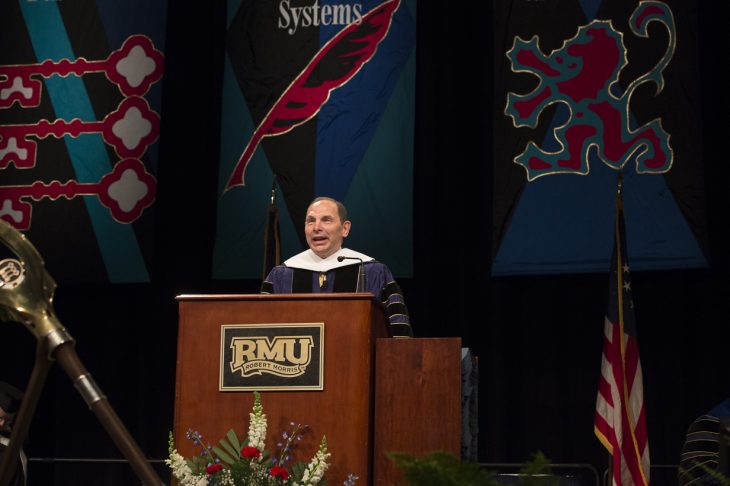 On Saturday, May 7, VA Secretary Bob McDonald delivered the commencement address at Robert Morris University in Pennsylvania where he urged graduates to commit to making a difference in the lives of others.

Below are the full remarks from the 91st commencement at Robert Morris University, as prepared for delivery.

Good morning, everyone, and thank you for inviting me to share in this celebration with you.

Not Bronze Bob . . . Bob McDonald. But you can get your picture with me, too, if you want.

Could I ask all Veterans and members of the military to stand—all of you . . . in the graduating class as well as those among this gathering of friends, family, and the faculty?

To all the Veterans—especially those 66 Veterans graduating—thank you. Thank you for volunteering to serve, for your sacrifices, and for your families’ sacrifices.

I’m honored to be your Secretary.

I know this isn’t the first time you’ve heard it, or the last time you’ll hear it, but to all the graduates, congratulations. We’re here to honor you and wish you the very best as you continue life’s journey. You’ve labored hard and done excellent work. Family and friends have supported you. They’ve encouraged you. And in many cases they’ve sacrificed in ways you never knew about to get you here.You owe them a great debt of gratitude.

In 1966, Robert Kennedy advised, “Each time a person stands up for an ideal, or acts to improve the lot of others . . . he or she sends forth a tiny ripple of hope. These ripples crossing each other form a million different centers of energy and daring, build a current that can sweep down the mightiest walls of oppression and resistance.”

Loren Eiseley gave us the same lesson in a parable. Let me repeat it.

The young man said, “There must be thousands of starfish. How can you make any difference?” As the old man threw a small starfish to safety in the water, he said, “It makes a difference to that one.”

Each of you has the capacity, opportunity—indeed, the moral responsibility—to make a difference in the lives of others. Gandhi did in India.  Martin Luther King did in the United States. Nelson Mandela did in South Africa.

But we don’t have to be a Gandhi, or a Martin Luther King, or a Nelson Mandela to make a difference. We only need to know our purpose, and then live every day with that clear purpose.

One of my best days was when I saw a paralyzed Veteran walk.

He stood up from a wheelchair he’d been in for 40 years and walked. His name was Billy. Billy walked because some good people showed him how to use a powered exoskeleton device called the ReWalk.

Now, just walking is important. When you don’t walk, muscles atrophy, bones become brittle, your gastro-intestinal system stops working the way it should. But to Billy, the most important thing was that he could stand up and look you in the eye again. Looking someone in the eye . . . well . . . that’s about a sense of human dignity.

It was miraculous. But not in the way you might first think.

How do we change the lives of others?

My favorite play is The Man of la Mancha, from the book Don Quixote by Miguel de Cervantes.  It’s a story about an old man who goes mad. Don Quixote puts on a rusty old suit of armor, thinks he’s a knight, and calls himself Don Quixote de la Mancha. Don Quixote saw the world not as it was, but as he wanted it to be—a world of chivalry, caring acts, noble deeds and impossible dreams.

As the play unfolds, Don Quixote picks a pathetic wretch named Aldonza to be his “Dulcinea,” his lady. Aldonza is a realist. She protests that she is, in her words, “born of a dung heap, a strumpet men use and forget.” Yet Don Quixote insists she is Dulcinea. He sees in her far more dignity—far more nobility—than she could dare see in herself.

Yet, Aldonza gives in to the old man’s dream of a better world, and she’s even compassionate toward her worst enemies, as was the duty of a lady. At the end of the story, Don Quixote dies.

After learning of his death, Aldonza addresses Quixote’s squire Sancho. She cries out, “Don Quixote is not dead. Believe, Sancho, believe.”  And when Sancho calls her by her name Aldonza, she ends the play with a single statement, “my name is Dulcinea.”

“My name is Dulcinea” says it all. Don Quixote’s kindness and generosity transformed Aldonza into Dulcinea, and because of that, her life would never be the same again.

Don Quixote’s creator, Cervantes, said, “Perhaps to be too practical is madness. To surrender dreams – this may be madness. To seek treasure where there is only trash.  Too much sanity may be madness.  And maddest of all, to see life as it is and not as it should be.”

This morning, as you continue on your own life’s journey, I challenge each of you to see life not as it is, but as it should be, to find your purpose, and to begin sending out those tiny ripples of hope.

Thank you. God bless you.