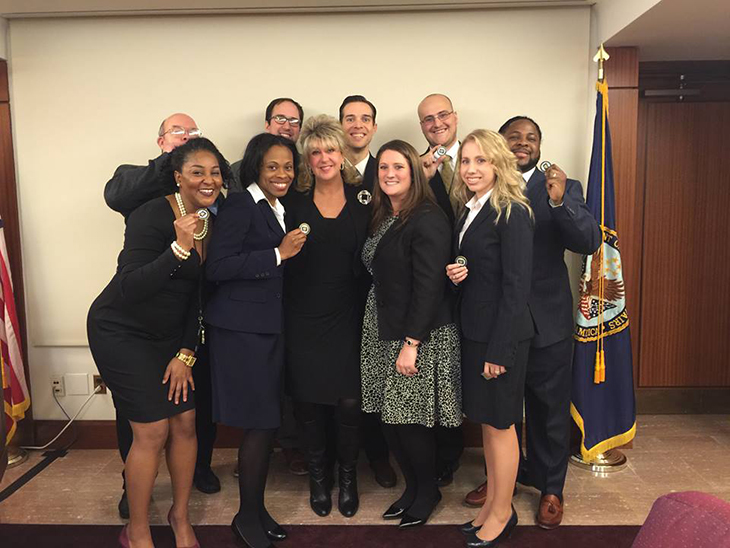 During a press conference in 2014, Secretary Bob McDonald gave his personal cell phone number to reporters to show them that he was serious about working with them and the American people to improve service and rebuild trust with America’s Veterans.

A number of those reporters broadcast Bob’s number from coast-to-coast and, in less than 24 hours, the Veteran community blew up McDonald’s phone.

Most executives would have thrown that phone away and started over, but not McDonald. He listened to voicemail, returned calls and kept up the best he could, but the calls kept coming and he realized he needed help – a lot of help. More importantly, Veterans needed help too. He turned to longtime VA employee Debi Bevins to help him handle the massive volume of calls and ensure that each Veteran’s concern was addressed in a timely manner.

Among other things, Bevins has been VA’s customer service guru in the Secretary’s office through numerous VA secretaries and is well-known for her ability to keep things on track. One her favorite tools for this is a system/process she spearheaded several years ago – the Client Service Initiative. Without getting into the boring details, when a Veteran calls the secretary’s office, the client service team helps the employee get the Veteran to the proper VA subject matter expert to help answer their questions or solve the problem. The neat part of the system is that it also tracks what each employee has done along the way and sends automatic reminders if the issue is not resolved in a timely manner. Its goal is to keep things from falling to the proverbial cracks.

“It allows VA employees to communicate across organizational lines no matter what level they work on,” Bevins explained. “It streamlines the process and ensures that everything is done properly and in accordance with regulations.”

Before the release of McDonald’s cell phone number, Bevins processed 60 to 100 Veteran calls per week. After it hit the airwaves, that number quickly jumped to more than 1,000 calls per week.  She needed help and slowly built a team of experts that now work under the banner of the Office of Client Relations (OCR).

OCR is currently comprised of 10 volunteer employees on detail from offices throughout VA. These employees bring a variety a knowledge and skills to the table that allow them to triage a Veteran’s problem to figure out where it needs to go and how it can be best answered in the most expeditious manner.

“We have four Board of Veterans Appeals employees on the team, two from VHA, two from VBA and two administrative specialists from the secretary’s office,” said team leader Scott Dale, who is also one of the Board attorneys on the team. “Having this broad depth of expertise on team allows us to navigate VA’s numerous administrations and business lines quickly and effectively.”

According to Dale, about 68 percent of the calls from Veterans are directly related to claims or appeals. The other inquiries run the gamut from the very simple questions or the most complex of complaints. The team works every single one with the same level of caring and precision while following a detailed process that involves working closely with the experts in the field and local level as they perform the hands-on work.

“Everything we do, we want done correctly under the pertinent laws and policies,” said Dale. “We are rebuilding trust with our Veterans by making sure their issues are being handled correctly and in a timely manner. That does not always mean they get the answer they are hoping for, but the answer they received is the correct answer.”

Helping Veterans get the answer they deserve is a major part of why employees accepted the detail to the team in the first place. Candice Henderson, a client relations specialist on the team, believes that there is no higher calling than working at VA.

“I think the mission of the Department of Veterans Affairs is one of, if not the most, noble missions in federal government work. These Veterans are willing to sacrifice themselves to fight for the freedoms that all of us have, so to be able to help and give back to them is great,” Henderson said. “I’m getting to put a voice to a name. You get to know the stories of the Veterans. Some of the older WWII Veterans have outlived their comrades and some of them have outlived their wives and children. They call in with these amazing stories of their war experiences and then say ‘I’ve never been one to ask for help, but I need it now.’ And so of course, of course, we would help!”

Some of the questions Henderson and the other team members help to answer are simple, but yet very important to the Veteran such as: Has their claim been received, has their appeal been filed, or their bank has changed and they are not getting their direct deposit.

Other issues can be quite complex and this is where the team’s broad depth of knowledge, along with the power of the secretary’s office, can come in handy especially when the Veteran’s issues is emergent.

“The best example would be a Veteran who had stage 4 cancer and was in hospice care,” explains Dale. “He had an appeal before the Board, and had only days to live, if not hours. We were able to contact the judge to get the case expedited and had VBA on standby to implement any allowances that the judge found to be warranted under the law and facts found.”

Fortunately for the Veteran and his family, the OCR team understood the implications of not expediting the appeal, something your average VA employee who does not work in appeals would not readily understand. If the Veteran dies before VBA implements any allowance by the Board, his appeal would be closed when he had passed. In order to receive the benefits, the family would have to file a new claim and the case would start over from the very beginning. That could take years to come to a resolution.

By having team members from various areas of VA, the client relations team developed a game plan and executed it with precision. But as with all of their actions, it’s the employees on the ground that actually have to do certain steps in the process. In the case of the cancer patient, the judge assigned the case to herself instead of a Board attorney and went to work. In the meantime, OCR had VBA benefits specialists standing by waiting for the judge’s orders (late in the evening).

“The judge actually found that there were additional issues raised by the record, and the evidence supported an allowance of several issues” explained Dale. “As soon as she signed the decision, the appeal was electronically transferred to the VBA employees, who implemented the allowances. I believe the Veteran passed the next day. We are glad we could help facilitate his appeals process for him and his family in such a difficult time.”

And that is essentially what Bevins, Dale, Henderson and the rest of the team do day in and day out to serve Veterans – they work in close collaboration with VBA’s and VHA’s client service teams as well as experts in the field to ensure that Veterans are being engaged directly at the local level.

If you are still curious about McDonald and his cell phone, he still caries it in his pocket and he still answers calls from Veterans when he can. When he can’t answer a Veteran’s call, the OCR team picks up their cause and runs it to ground, updating McDonald regularly to ensure that each one is being taken care of properly and none fall through the cracks.

One piece of advice to get your issues addressed: It is always best to solve issues at the local level first, as all inquiries will ultimately come back to the place of origin for restitution. You can find the nearest VBA facility here or for more direct questions about active claims or appeal, please visit eBenefits. For health care concerns, start with your local facility and the patient advocate.

When contacting these facilities, please be prepared to provide your full name, date of birth, branch of service, full claim number, and last 4 digits of your Social Security number.

Editor’s note: Last week, VA released the MyVA Transformation Update, which lay out the progress VA has made in meeting our vision of making VA the #1 customer-service agency in the federal government. Read more about the update from Sec. McDonald here.